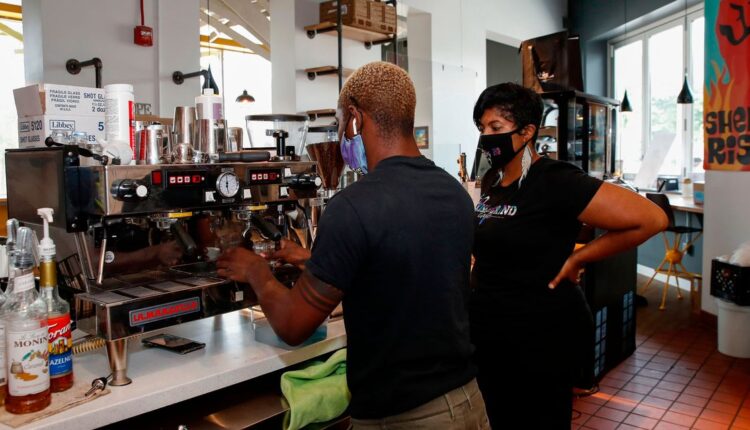 Small business owners say they have many customers, but a worrying sign for the US economy is that they are becoming increasingly frustrated with the lack of supplies and skilled labor hindering sales.

A closely monitored gauge of small business confidence fell to a six-month low in September, driven by widespread constraints in the economy that are slowing the pace of the US recovery.

The National Federation of Independent Business said its Optimism Index fell one point to 99.1 in September. That is the lowest value since March.

What is the problem? Small businesses complain that despite raising their wages, they cannot find enough skilled workers. They also can’t get parts and accessories fast enough to keep up with demand. These problems have also affected the largest companies across the country.

“Small business owners do their best to meet the needs of customers, but cannot hire workers or receive the supplies and supplies they need,” said NFIB chief economist Bill Dunkelberg after the survey results.

More than 50% of small businesses said they were unable to fill vacancies in the past month, a 48-year high. And the number of companies offering higher wages was also at a 48-year high.

Read: .US adds only 194,000 jobs in September as more people leave the workforce

The US has had a widespread shortage of critical parts and supplies for months, and it’s reportedly getting worse. The ports on both coasts are overcrowded and ships wait outside the ports for days before they can unload. Trucks are also in short supply and commercial rail transporters are overloaded.

That scarcity has sparked the largest spike in US inflation in 30 years and could last well into next year, economists say. Most companies pay more – sometimes significantly more – for parts and consumables. That is, if they can even get it.

Read: The economy will recover when the delta subsides, ISM finds, but bottlenecks are still a major concern

Businesses large and small have raised prices to cover some of their expenses. However, some say it eats up profits or costs them additional sales, according to the NFIB and other surveys.

Small businesses are also increasingly concerned about the prospect of new taxes and regulations being proposed in Washington, according to the NFIB.

“The prospects for economic policy are not encouraging for property owners, as lawmakers are shifting to talks about tax increases and additional regulations,” said Dunkelberg.

The NFIB, one of Washington’s most influential lobby groups, has opposed these measures in the past.

A Wrenching Farewell: Bidding Adieu to My Primary Care Doctor After Nearly 30 Years