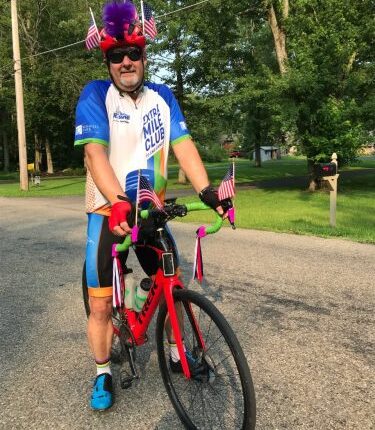 During one of our recent trips to Chautauqua County, our path was crossed more than once by a cyclist that we will not soon forget.

When we first (not literally) met Galen Zook that sunny day, we were at Luensman Overview Park in the city of Portland. Down the road we passed a stream that trickled through a willow from the roadside. I asked my husband to stop the vehicle to take a picture.

We always try to be aware of our surroundings, so I noticed a man on a bicycle coming down the country road from behind and pointed it out to my husband, who was still behind the wheel. After turning back to the scene I was trying to capture with my iPhone, I could hear the radio from the man walking past me.

As we were walking down the street, we saw the man again. This time we approached him from behind. My travel companion asked if I noticed the man’s flags. I hadn’t looked at him when he was around, so I tried to peek as I walked by, and a quick look at his helmet, which had three small American flags attached to it.

After driving into Hartfield, we crossed Route 430 onto Mill Street. We majestically watched a blue heron on the edge of Hartfield Bay and then found ourselves on Sea Lion Drive. At the point where Little Inlet crossed under the street, I asked my chauffeur to stop again.

As I photographed the small swollen stream that meandered back and forth between two houses, I saw the man with the flag-adorned helmet approaching on my left.

I couldn’t contain my curiosity anymore. I reached out my hand and gave him the stop sign. With a smile on his face, he obeyed. When I looked more closely, I saw a red helmet with a large, purple mohawk in the middle and the little flags on three sides. The man was wearing a Roswell Extra Mile Club jersey, red fingerless gloves and blue shoes, and was riding a red bicycle with two other flags on the handlebars. Red, white, and blue streamers hung from each end of the handlebars.

I found out his name is Galen Zook. He earned the jersey by raising at least $ 1,000 for the Ride For Roswell, which enabled him to join the Extra Mile Club. This year, for the ninth time, he will take part in the annual fundraising campaign for the cancer center, which was postponed to August 7th and, as usual, takes place at the end of June. For seven years, he was one of 250 drivers who drove the two of them the 12 miles from Roswell to the State University of New York on the Buffalo campus as cheering spectators lined the streets.

Not only does he enjoy wearing flashy outfits for his local rides, but he changes his colors for the Roswell ride every year. For a year he dyed his beard pink and glued a pink mohawk to his helmet. The next year he went all out with a blue beard and mohawk.

Everything that could be changed on his bike in blue has been changed, such as the tires, handlebar wrap, water bottle and water bottle holder. He wore a blue jersey and matching shorts that had the Bible verse John 3:16 and a picture of Jesus on them. He used to take the mohawk off his helmet but found people like to see him so now he’s just changing colors.

The 58-year-old drives an average of 100 miles a week. The weather and his Lincare work schedule are the only two things that keep him from driving. He is traveling to Iowa to compete in the 48th Register’s annual Great Ride Across Iowa (RAGRAI), a 400-450 mile course that begins Sunday and ends July 31st. This is the second time he has attended the event.

Zook lived in Mayville all his life, with the exception of 17 years in the US Navy.