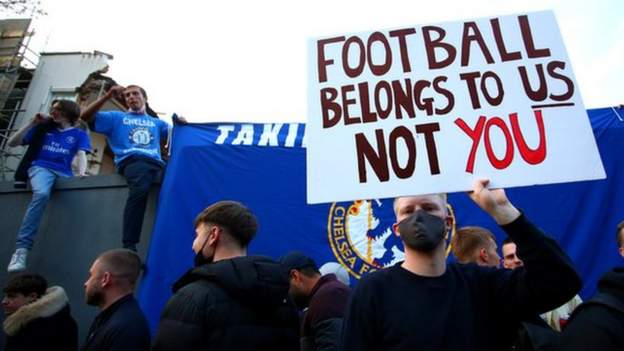 The creation of an independent regulator for English football (IREF) was “broadly endorsed” by the government.

Culture Minister Nadine Dorries welcomed the review, saying the government would work on a “substantive response” to be presented next spring.

“We are at a turning point for football in this country,” she said.

“Football needs a strong, independent regulator to secure the future of our national game.

“The government will now work flat out to find the most effective way to provide an independent regulator and all the powers that may be needed.”

The review was led by former Sports Secretary Tracey Crouch, who told BBC Sport that English football needed an independent regulator to keep it from “lurching from crisis to crisis”.

Dorries replied on social media,external link said: “We have seen clubs with centuries-old traditions like Bury and Macclesfield Town completely disappear while the European Super League threatened the very foundations of the game.

“The review also shows that in-game incentives all too often lead to reckless financial decisions.

“Football clubs are the heart of their local communities and this government will ensure that they are properly run and that the fans are protected.”