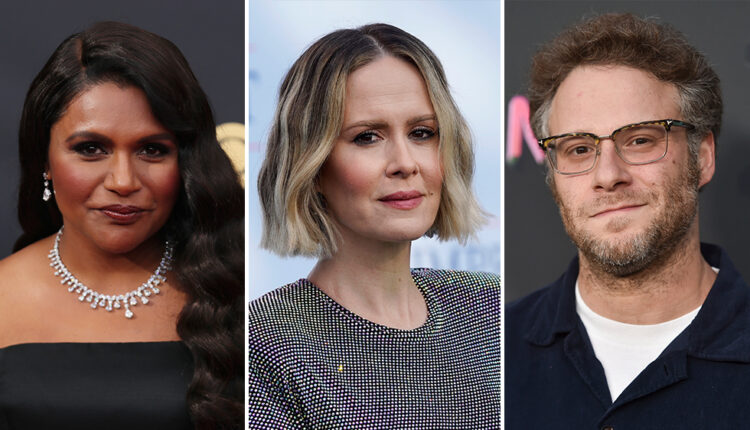 A number of Hollywood celebrities posted their solidarity with the International Association of Theater Workers on social media this week ahead of a strike vote.

Talks between IATSE and the Alliance of Motion Picture and Television Producers have failed as the workers who support productions seek improvements in meal and rest times, longer turnarounds between production days, and improved rates on streaming projects. As crew members share their support for a possible strike, actors like Mindy Kaling, Seth Rogen, Sarah Paulson and SAG-AFTRA President Fran Drescher are among those who all shared posts about #IASolidarity.

Jane Fonda and Lily Tomlin posed in T-shirts and showed their support for strike actions. The tweet shared by IATSE Local 600 reads: “Icons, forever and ever. @JaneFonda and @LilyTomlin are next to @IATSE in #IASolidarity. #IAVoteYes ”

Oscar-winning actress Anna Paquin shared a link to an online petition asking her supporters to sign the form in solidarity. Paquin wrote, “Your life depends on it.” The petition called on the Alliance of Motion Picture and Television Producers (AMPTP) to “get a fair deal with IATSE film and television workers by addressing grave problems.” Almost 50,000 signatures have been collected so far.

Another actress and producer who shared her voice was Kerry Washington. She wrote, “There are so many talented people who make the movies and TV shows we love! You may not see them on screen, but they are the wizards and the glue that holds every set together. I urge the #IATSE to hear them. And I stand with my brothers and sisters in this strike #IAsolidarity. “

Actress Rachel Ziegler posted a similar post shortly after the release of the new “West Side Story” trailer. Ziegler, who appears as Maria in the film, wrote: “If you enjoyed our West Side Story trailer, you must know that the beauty of our film would not be possible without the tireless efforts of our incredible crew. Crews work harder than anyone else in the industry and deserve the best treatment. # IASolidarity #IALivingWohn. “

There are so many talented people who make the movies and TV shows we love! You may not see them on screen, but they are the wizards and the glue that holds every set together. I urge the #IATSE to hear them. And I stand with my brothers and sisters on this strike #IASolidarity

# I solidarity we all have to sign it. Your life depends on it. https://t.co/tI3uvZugPz

I stand with you, my @IATSE brothers and sisters. They make entertainment magical and they deserve fairness and dignity in the job. #IAStrong #IALivingWage # IASolidarity

Our films and films literally wouldn’t exist without our crews, and our crews deserve better. pic.twitter.com/hFMCmWzUVT

I’m standing with @IATSE THIS THIS THIS https://t.co/9d9fLL6s7w

100 percent solidarity with @IATSE Without them we are and we have nothing. https://t.co/t3Jbre9xtD

Film crews work harder than most people outside of the biz can ever imagine. Inexorably long hours under the $$ pressure to get it right, now. Keeping my @IATSE colleagues in the lurch is part of what drives me on a set. Register this ball on the field. With them 100%. https://t.co/db6abZDxWh

The crews are the backbone of our industry. The first in, the last out. They deserve safe conditions and accessible health care. I stand with @IATSE.

I have just spent 9 months working with an incredibly hard working crew of filmmakers in very difficult conditions. Support them fully in the fight for better conditions. # IATSE

I stand with @IATSE! No movie or television you love would be possible without members of the IATSE union – people deserve living wages and plenty of time to rest. So many people who enable your favorite content are treated unfairly. # IASolidarity https://t.co/2rhHvfEzdz

Stand in # solidarity with my friends and colleagues on the set in @IATSE. Entertainment content only comes about because our crews are exceptional. #IALivingWage #IASolidarity https://t.co/9I5lBTFnnF 1st 2 arrive / last 2 leave!

I just signed a @iatse petition: tell AMPTP to offer film and television workers a fair deal! Do you want to join me Sign here: https://t.co/SW2gFQEO6s