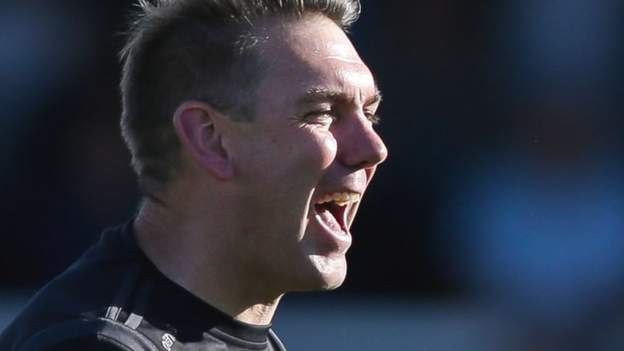 Dave Challinor was named CEO of Hartlepool in November 2019

The 45-year-old former Tranmere Rovers, Stockport County and Bury defender has led Pools to sixth place in the table after advancing through the National League play-offs in May.

Challinor began his career as a manager at Colwyn Bay, where his active days ended in 2010.

He spent eight years as AFC Fylde boss before joining Pools in November 2019.

“I know the fans have been eagerly awaiting this announcement,” said Pools Chairman Raj Singh announced the club website.external link

“I also know that some of the fans were concerned we weren’t going to back up Dave, and I’m equally excited to be able to dispel those doubts.”

After leading the club to ninth place in a 2019-20 season interrupted by the Covid pandemic, Challinor made promotion in his first full campaign.

“The reception I and my family got at the club was exceptional,” said Challinor.

“I knew how big the club is for this city, but I probably didn’t expect that the connection between a club and its fans would be so strong. This can be seen all over the city.

“The big thing for me was the bus parade. Seeing how many people came out. From young kids with their fathers to the older generation waving out their window. It makes it easy to fall in love with Hartlepool.”