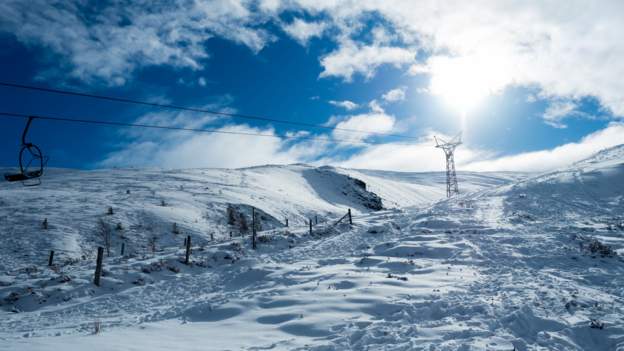 Olympic snowboarder Matt McCormick noticed changes in the mountains a few years ago.

At first only the snow came a little later in the year, then again and again a little later. There isn’t always less snow, but the volume during the winter season is much less predictable than it used to be, he says.

From the Winter Olympics to skiing holidays, snow sports are threatened due to rising global temperatures. A study updated in 2018 predicted that re-hosting the Games in nearly half of the previous venues would be too risky by 2050.

“It’s a concern from a competitive standpoint, but even competitive snowboarders would say that’s just a tiny corner of it,” says McCormick.

Danger on the mountain

Robbie Phillips, a professional climber, is also concerned about the changing conditions in the mountains.

He climbed the north face of the Eiger in Switzerland in the summer of 2015, when there was almost no ice. When it was first climbed in July 1938, it was a complete winter ascent.

Phillips says the window for winter climbing has narrowed massively over the year, creating its own problems.

“In the UK in particular, a lot of people travel quite a long way to climb in winter,” he says. “As the conditions become more changeable, people are more likely to risk climbing if the conditions are not perfect. It may be a disaster.

“It is up to each individual to make the decision, but since there are less good days people are more likely to take risks just to get out and climb. As a result, more accidents are likely to happen.”

Scotland’s five ski resorts are all below 2000m, which means that as temperatures rise, they are at greater risk of less snow.

A climate coalition report predicts that a 2-4 ° C rise in temperature could lead to a 60% reduction in winter snowfall rates by the 2080s. Some current forecasts assume a temperature increase of 2.7 ° C.

Ski resorts in Scotland are already facing challenges due to less predictable winters, with Snowsport Scotland’s national infrastructure strategy suggesting that all five ski resorts should invest in additional snowmaking.

But artificial snow requires huge amounts of water, which has its own impact on the environment, as does the large amount of energy required for the process, in part from diesel generators. It is a doom-loop.

Cairngorm Mountain (Scotland) Limited, the company that runs the resort on the mountain of the same name, told BBC Scotland that they recognize the effects of artificial snow but are working to make it “more sustainable”.

The ski industry is worth £ 30 million to the Scottish economy and supports 634 jobs, mostly in rural communities like Aviemore. A lack of snow in the mountains endangers the prosperity of entire cities, then there is still a problem with accessibility.

Winter sports are already expensive, and cheaper ski resorts under 2000m that are losing snow mean higher, more exclusive destinations in Europe are the more reliable option only for those who can afford it.

Athletes who lead the fight

While resorts and associations grapple with the existential threat to winter sports, it is the athletes who lead the fight.

Protect our Winters (Pow) is a charity that was originally founded in the United States but now with global reach seeks to use the voice of athletes to pressure governments and businesses to do more about climate change.

A big part of that is education. The athletes go through a CO2 literacy course so that they have the confidence to exchange ideas with their fans, sponsors and politicians on environmental issues.

“We are working with our community to educate them about the various issues,” said Lauren MacCallum, general manager of Pow in the UK. “Whether it is about municipal pensions, North Sea funding or energy and finance.

“If we can raise awareness, train and empower our community and industry to respond to these issues, we can bring that into the directive. I think why we see this as an effective model is when you talk to ministers and it’s just the same climate voices, it gets easier to ignore each time. ”

Both McCormick and Phillips work with Pow and agree that they – and others – can best force change through the democratic process of voting, liaising with your MP, and interacting with others.

It also means that they change their own lives, including where they want to spend or invest their money. But as athletes who travel by air to compete and get around the country, they are often faced with hypocrisy.

“It’s challenging to deal with because it happens pretty regularly,” says Phillips.

“But I think instead of demonizing people for individual action, we should try to encourage people to make systemic change and encourage governments and companies to fight for climate change [issues]. “

McCormick agrees. “I totally understand where that comes from. But the problem with that is, if you follow this line of thought to its logical conclusion, everyone should just be doing nothing.

“If everyone is sitting around pointing their fingers, we’re going to get nowhere. So it’s really important that people can do what they think they can.”

Despite the challenges, McCormick is still confident that his sport can be saved.

“I’m definitely confident,” says McCormick. “I’m pretty sure it will last, but it’s getting harder. That scares me about how much harder it will be for me in the short term and in the long run for future generations.”

Patients Went Into the Hospital for Care. After Testing Positive There for Covid, Some Never Came Out.