Climate, COVID and the economy at the top of the G20 agenda at the Rome summit 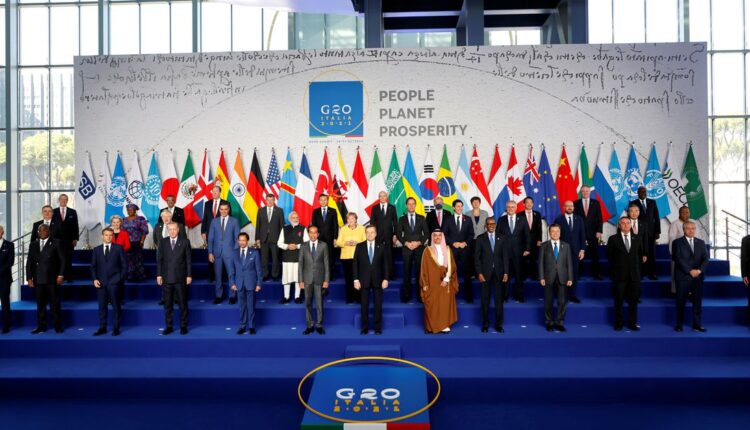 ROME, October 30 (Reuters) – The heads of the world’s 20 largest economies began two days of negotiations on Saturday in which they recognize the existential threat of climate change but want to meet radical new commitments to curb global warming.

A draft communiqué seen by Reuters shows that big countries are likely to be only slightly tightening their climate pledges while failing to set tough new targets that activists say are essential to preventing environmental disasters.

However, the Chinese and Russian presidents stayed away because of their ongoing concerns about COVID, which tarnished hopes for great advances in climate diplomacy ahead of the upcoming COP26 summit in Glasgow, seen as crucial to addressing the threat of rising temperatures. Continue reading

British Prime Minister Boris Johnson admitted talks in Rome and Glasgow would be difficult, but warned that without bold action, world civilization could collapse as quickly as the ancient Roman Empire and usher in a new dark age.

“It’s going to be very, very difficult to get the deal we need,” he told reporters early on Saturday.

The draft final communiqué states that the G20 countries, which account for up to 80% of global CO2 emissions, will step up their efforts to limit global warming to 1.5 degrees Celsius – the level that scientists believe is necessary to avoid catastrophic new climate patterns.

The statement also said leaders recognized “the key relevance” of achieving net zero carbon emissions by the middle of this century – a goal that some of the world’s biggest polluters are still not committed to to have.

The world’s heads of state and government will gather for the official family photo on the first day of the G20 Summit on October 30, 2021 at the La Nuvola convention center in Rome. Ludovic Marin / Pool via REUTERS

While Rome will be dominated by the climate debate, much of the first day of the summit, held in a futuristic convention center called “The Cloud,” will be devoted to discussing the COVID-19 health crisis and economic recovery.

Fears of rising energy prices and stretched supply chains are addressed. Leaders were also expected to endorse plans to vaccinate 70% of the world’s population against COVID-19 by mid-2022 and form a task force to combat future pandemics.

Biden’s hopes of showing his country is at the forefront of the fight against global warming were shaken after failing this week to convince Democrats to back a $ 1.85 trillion economic and environmental spending package. Unite dollars.

However, John Morton, the U.S. Treasury Department’s lead climate adviser, said the fact that climate had moved to the top of the G20 agenda marked a remarkable change.

“Obviously this government came back with arms to fight the issue in really important ways.” he told Reuters.

Much diplomacy was also expected to take place on the fringes in Rome, with numerous bilateral meetings planned while leaders of the United States, Britain, Germany and France were to hold four-party talks on Iran.

Rome has been put on high security alert with up to 6,000 police officers and around 500 soldiers to keep order.

Two rallies were approved during the day, but protesters are being held far from the summit center, which is in a suburb built by 20th century fascist dictator Benito Mussolini.

Williamsport City Workers are scattered but can be located on the map | News, sports, jobs