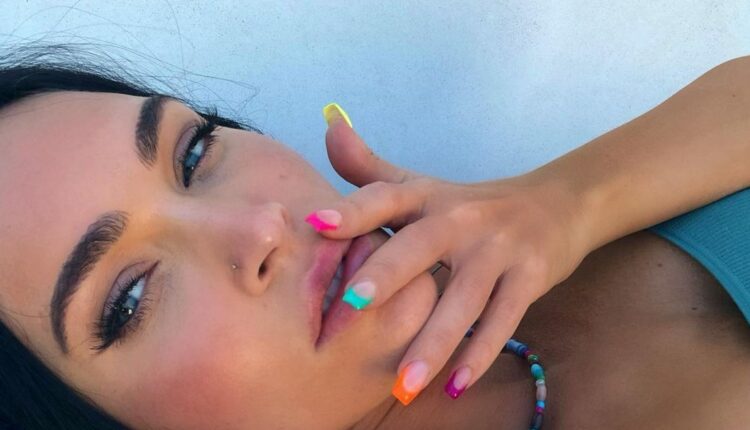 It’s summer in the northern hemisphere, which means that celebrities are getting their neutral manicures (or in many cases their nails for the first time since the pandemic shutdown of nail salons around the world) for fun, fresh hues. And by far the biggest trend we’re seeing right now is neon nail colors, as featured on quite a number of Hollywood’s A-list.

Selena Gomez has been experimenting with a range of fruity brights for the past few weeks, starting with one of the hottest hues of the year – neon green. We’ve seen the shade preferred by the shoe and bag style set (hello Kylie Jenner and Hailey Bieber in bottega green) but now it’s becoming a new nail salon favorite, so Billie Eilish seems to be on to something.

Gomez wore the light shade for a tropically inspired shoot to promote her new collection with swimwear label La’Mariette, and we’re obsessed with the fresh contrast the color creates with her sunset makeup.

It appears that Gomez enjoyed the bright nail color when she paid another visit to her manicurist Tom Bachik to update her neon numerals. This time she chose a striking shade of papaya.

The Kardashians have been advocates of neon nails for years, but this year they’ve taken it a notch or two up by adopting unconventional hues. Khloé Kardashian – who often has a penchant for a bright pink mani with XXL coffin nails – opted for a different current shade for sparkling yellow nails to go with her new neon campaign for Good American.

And of course, Kardashian’s sister Kylie Jenner is perhaps the biggest fan of brightly colored nails, which has worn almost every shade over the years. But lately she’s been drawn to light colors almost entirely, and we love her latest manicure – neon orange wet look nails with droplets.

We’ll save these neon colors for our next salon visit.