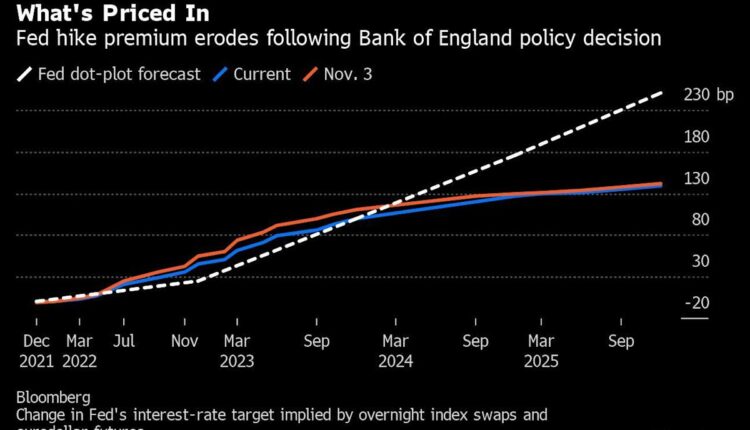 (Bloomberg) – Global bond markets rebounded after the Bank of England’s surprise decision not to raise rates prompted traders to reassess the outlook for monetary policy worldwide.

Most read by Bloomberg

Short-end yields were hit the hardest on Thursday as the US five-year rate fell to near three-week lows. Yields on British bonds with a similar maturity fell the most since the Brexit vote, while the two-year interest rate in Germany reached its lowest level in two months.

Traders are rethinking the likelihood that global central banks will yield to market expectations for tighter monetary policies to control inflation, especially after the BOE’s decision. That has created confusion, volatility and dismay after US prices shifted to faster rate hikes just last week.

Two- and five-year US Treasury bond yields fell four and eight basis points, respectively, after the five-year fell as much as 10 basis points to 1.088%, their lowest level since October 15.

In the UK, yields for these maturities fell 21 and 19 basis points, respectively, after policymakers shocked markets by placing concerns about slowing growth above projections of rising inflation. Even the yield on two-year German bonds reached its lowest level since September 1st.

The shift in sentiment prompted traders to ditch bets on the pace of the Fed’s tightening, which announced on Wednesday that it would begin throttling its asset-buying program this month. Interest rate futures, which had priced in two quarter point hikes in 2022, moved the second to 2023.

The Fed’s taper rate, if maintained, would end bond purchases by the middle of the year. While Chairman Jerome Powell reiterated the taper decision sent no signal regarding interest rate policy, futures markets continue to price in a roughly 70% chance that the Fed will hike in June.

The next big US data point in focus is Friday’s October labor market report, which is central to the Fed’s dilemma, as Powell discussed at the press conference after Wednesday’s meeting. While the inflation rate “is not at all compatible with price stability”, policymakers are unwilling to raise interest rates “because we want the labor market to continue to recover,” he said.

The central bank is focusing on low labor force participation due to pandemic-related factors, causing the unemployment rate to underestimate the job shortage, he said.

The October report is expected to show a 450,000 increase in non-farm employment, which would be the largest since July.

Most read of Bloomberg Businessweek

The black sheep! Meet the children of celebrities who have been in jail – CVBJ