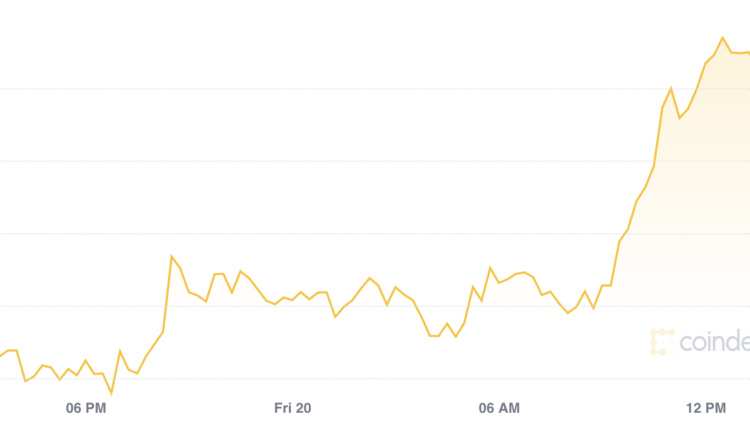 Cryptocurrencies end the week on a strong note as Bitcoin broke above $ 48,000 for the first time since May. The world’s largest cryptocurrency is up about 4% in the past 24 hours and could face resistance near $ 50,000 to $ 55,000 by the weekend.

On Thursday, Coinbase announced that it would buy more than $ 500 million worth of cryptocurrencies to replenish its holdings. Crypto exchange CEO Brian Armstrong also tweeted that Coinbase will “invest 10% of all future profits in crypto.”

Coinbase’s announcement encouraged Bitcoin buyers to return to the $ 45,000 support level. Bitcoin’s price jump also coincided with the stabilization of stock markets after a pullback earlier this week.

“Right now, Bitcoin and other cryptos enjoy technical support (as they have been slightly oversold),” wrote Santiago Espinosa, strategist at MRB Partners, in an email to CoinDesk.

Related: Bitcoin cracks $ 48,000 for the first time since May

“At this point in time, some cryptos can continue to do well if policymakers neglect inflationary pressures and regulatory issues don’t become a mainstream issue,” wrote Espinosa.

Bitcoin’s negative correlation with gold has intensified in recent months as inflation expectations weakened. Gold is down about 6% year-to-date, compared with Bitcoin gaining 65% over the same period.

The correlation between Bitcoin and iShares’ long-term Treasury Bond Exchange Traded Fund (TLT) turned positive for a short time in July as the crypto sell-off stabilized. Recently, Bitcoin’s recovery rally coincided with a surge in 10-year government bond yields, which stalled near the 1.40% resistance level.

The growth in Bitcoin futures volume compared to spot volume could reflect greater involvement from experienced traders. “In the past year, futures and perpetual swaps have become the most popular financial instruments in the crypto space,” tweeted Delphi Digital. Futures and perpetual futures make up over 60% of total daily bitcoin volume.

Perpetuals are gaining ground compared to spot market activity and are quickly becoming the main source of pricing, according to Delphi.

Bitcoin Perpetual Swaps are a type of derivative in cryptocurrency markets, much like futures contracts in traditional markets.

Delphi also noticed a similar trend in Ether, although spot markets still play a bigger role in this crypto than futures markets.

Bitcoin miners’ positioning index (MPI) has flattened in the past two weeks. The MPI tracks whether miners move their BTC positions higher or lower.

The sideways movement of the MPI suggests that “miners’ profit-taking is slowing significantly along with the stagnation in price increases,” wrote CryptoQuant in a blog post on Friday.

CryptoQuant expects a downward price adjustment at BTC before a decisive increase occurs above the price level of USD 50,000. A price breakout could encourage miners to build positions.

All digital assets on CoinDesk 20 were higher on Friday.

From children’s series to the world: the seven celebrities who tried their luck abroad and were successful