Nigerian economists and businesses have been clamouring for economic reform for years. In the past few months, the government has finally taken action.

It also said that it would fast-track the Petroleum Industries Bill, a key reform roughly two decades in the making that would commercialise the national oil company and bring clarity to the murky rules governing the country’s most important sector.

There are other positive signs. The government’s decision to raise VAT from 5 to 7.5 per cent, as well as other moves, has meant tax collections have stayed relatively even, albeit still very low, despite a 6.1 per cent economic contraction in the second quarter.

The government has opened up gold mining and is focusing on exploiting Nigeria’s vast natural gas reserves, which remain largely untapped despite being some of the largest in the world. The finance bill passed this year is seen as boosting small and medium sized businesses.

Five years into Mr Buhari’s tenure, even the Lagos business elite that has scorned him as an old-school socialist hostile to the private sector has begun to give him credit for key policies. They could improve an economy that has just entered its second recession in five years.

But much work remains to be done, and there is little sign of the strategic vision in Abuja necessary to truly transform Africa’s largest economy, says Amaka Anku, director of the Africa programme at the Washington-based Eurasia Group. The reform momentum is likely to stall.

“We have plans on paper but nobody really has and is communicating a holistic vision — there’s no visionary leadership to really tackle what are the hard issues: improving productivity, improving exports,” she says. “That’s how those Asian tigers grew — you have a coherent strategy that articulates how all the policies work together to advance a broad development agenda.”


Tens of millions of Nigerians live in extreme poverty — on less than $1.50 a day


The oil-price crash has hit Nigeria’s most important sector, while the pandemic-linked lockdown has sent the economy into recession. It has barely recovered from the last one.

In the short term, the statistics paint a dire picture.

The economy is contracting, the naira is depreciating, inflation is peaking, foreign reserves are falling, foreign investors are fleeing, food prices and unemployment are soaring.

About 90m Nigerians live in extreme poverty — on less than $1.50 a day — the greatest number of any country in the world. 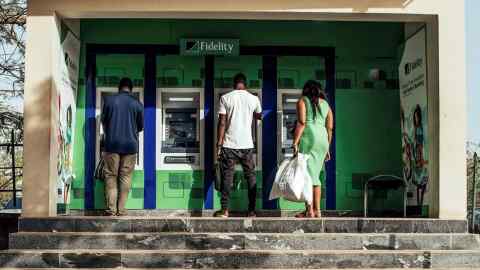 Well over half of Nigerians are unemployed or underemployed, and productivity remains abysmally low.

Remittances have also fallen. Nigerians abroad sent $23.8bn home last year, according to the World Bank — about half of the total sent to all of sub-Saharan Africa. The World Bank estimates that figure will drop around a quarter this year, as the pandemic’s economic shock redounds on Nigerians around the world.

“When you have pandemic or a global downturn, the ability of Nigeria to receive remittances from the US or Europe is off the table,” says Hippolyte Fofack, chief economist at African Export Import Bank. “So you have the remittances and the oil price and that makes it a perfect storm for an almost monoculture economy like Nigeria.”

More stories from the Nigeria at 60 report

Without more dynamic leadership and vision for how to expand the bounds of Nigeria’s oil-dependent economy, Mr Buhari is unlikely to achieve his goal of lifting 100m people out of poverty. That does not mean that major investment is on hold. Some of the country’s richest men — including flour-and-cement billionaires Aliko Dangote and Abdulsamed Rabiu, and banking-and-power magnate Tony Elumelu — are ploughing ahead with big projects in oil and power.

But those projects will not be enough to grow the Nigerian economy, especially when the majority of companies — from small manufacturers to those same billionaires — are having trouble sourcing US dollars amid a severe currency crunch.

“If there is scarcity, you cannot pay your suppliers, you cannot service your offshore debt, and that creates a credibility prob . . . for the business,” said Muda Yusuf, head of the Lagos Chamber of Commerce and Industry. “It’s a major crisis.”

To curb the need to import nearly everything, the Buhari administration has tried to bolster domestic production by banning access to forex through official channels for dozens of items, from cement to toothpicks to rice to cold-rolled steel sheets.

Critics argue that rice farming will not become economical overnight, and the policy raises prices for ordinary Nigerians in the short term. The government’s investment in infrastructure — particularly road and rail — is helpful, but needs are vast, and domestic manufacturing remains hindered by the high cost of power.

Meanwhile, purchasing power is falling, sinking many businesses, particularly in the informal sector that according to the IMF makes up the biggest slice of the economy. But some businesses remain bullish, especially telecommunications, which has enjoyed a rise in demand as the pandemic has confined people to their homes.

David Butler, chief executive of Food Concepts, which owns Chicken Republic, the largest fast-food chain in the country, is similarly optimistic. The company has been investing throughout the pandemic — and Mr Butler says it will increase its number of restaurants to 140 from around 110 by the end of the year. “Obviously we feel the recession, but at the end of the day there are 200m people in Nigeria who need to eat,” he says.

This article is part of Nigeria at 60, an FT special report published in the Financial Times on Thursday 29 October and online at ft.com/nigeria-60.