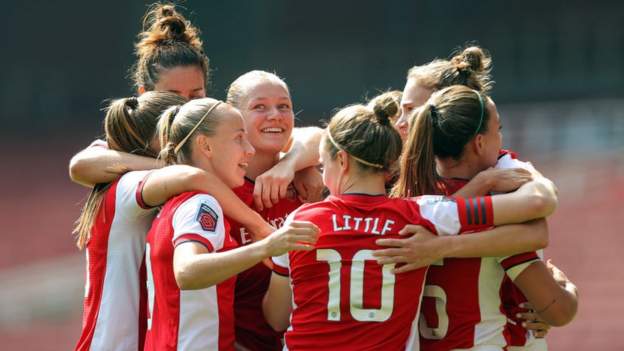 Jonas Eidevall was on his feet throughout the game, applauding the performance of his team

Arsenal have shown their intention to challenge a Women’s Super League title with some aspects of their game this season, coach Jonas Eidevall said after beating defending champions Chelsea at the Emirates Stadium.

Two goals from England international Beth Mead and one from striker Vivianne Miedema gave Arsenal an impressive 3-2 win in a spectacular encounter.

Chelsea, who finished nine points ahead of Arsenal last season, couldn’t find a late equalizer as more than 8,000 fans watched the stadium.

When asked if Arsenal had shown their title intent, new coach Eidevall said: “In some ways, I think it was how we as a team defended in the last 20 minutes and how we defended theirs in the first 30 minutes Have brought out pressure. ” even.

“Those were nice things we could do together and they helped us win today. We know we have a good squad. We know we are a good club. It’s about playing every game . ”

“We’ll learn and develop during the season. It was a nice performance, a nice win, but it’s a game of many.”

Chelsea boss Emma Hayes, who lost her team only once in the league last season, said the challenge from other teams in the WSL is “there every year”.

“We scored two goals and had 15 shots in the Emirates so we created chances but you can’t get three goals and expect to win games,” she added.

“The challenge comes every year, so it’s no different, but I think the Champions League competition meant that our opponents had a little more in the legs than we did in the clinical moments.

“The way we conceded those three goals – all in transition – is the most disappointing part for me. It’s a challenge for us, but the league is not won or lost in one game.”

“As if they were second class citizens” – Hayes 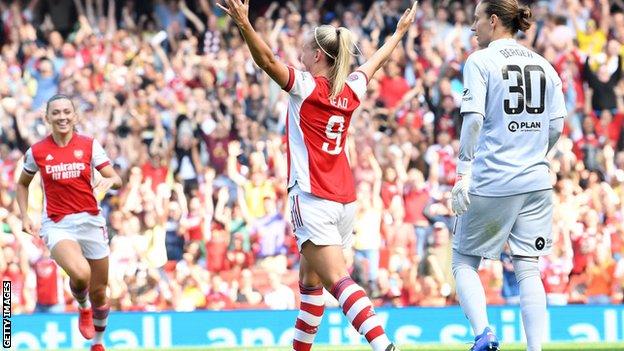 Mead appeared sidelined as she was brought in by Mana Iwabuchi to score her second goal, which ultimately turned out to be the winner.

Discussions broke out about the lack of goal-line technology and video assistant referees in the women’s game due to a number of controversial moments on the opening weekend of the WSL.

Reading’s Brooke Chaplen hit the bar, with replay suggesting the ball had bounced over the line during Friday’s Manchester United loss.

Manager Kelly Chambers said she hopes new technology will be added to the game in the not-too-distant future and Manchester United boss Marc Skinner said he would welcome the addition as well.

Commenting on Mead’s goal, Chelsea’s Hayes said: “I heard before the game that there was some talk about it not being a priority because it’s really expensive but I think we are selling our game too short.

“We’ve all got used to VAR and goal-line technology, so I feel like it feels like second-class citizens when we don’t have them in women’s football.”