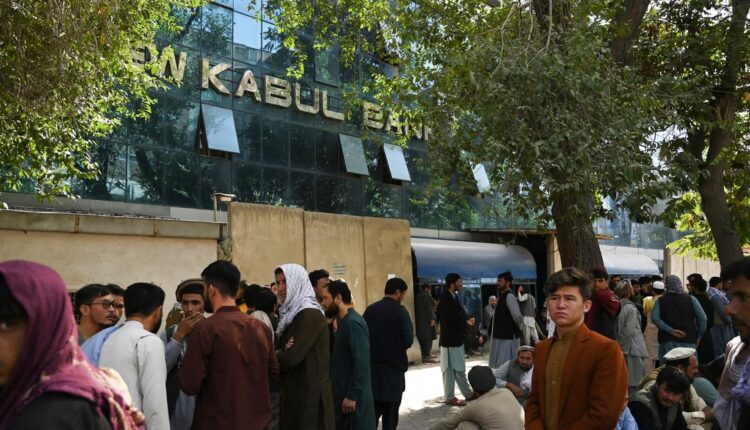 Bank account holders gather in front of a closed bank building in Kabul on August 28th. The country is facing a bank run as cash supplies are running low, writes Abdul Qadeer Fitrat.

About the author: Abdul Qadeer Fitrat is the former governor of the Afghan Central Bank and author of The Tragedy of Kabul Bank.

Afghans who fear the Taliban may soon have something else to fear. The country’s financial system is heavily dependent on foreign funding and appears to be in immediate danger.

Before the Taliban took control of the Afghan capital on August 15, the country’s GDP was largely dependent on foreign aid. About 75% of the Afghan civilian budget and the total defense budget of $ 4 billion was paid for by the United States, its NATO allies, and others.

When the Taliban invaded Kabul, the US Treasury Department reportedly froze the bulk of Afghanistan’s $ 9.5 billion international currency reserves held with American financial institutions. While the details are not yet clear, European allies such as Germany, Switzerland and the UK, where significant central bank reserves have been placed, could do the same. The effect would be to block the Taliban’s access to this money.

On August 16, the International Monetary Fund announced an estimated $ 370 million disbursement to Afghanistan, citing “lack of clarity within the international community” about recognition of a government in Afghanistan. The World Bank, which has raised more than $ 5.3 billion since 2002

According to a report by Al Jazeera, the Asian Development Bank remains committed to providing assistance to Afghanistan for the time being. It is the second largest multilateral donor to Afghanistan. However, since the USA, India, Australia and Japan are among the largest shareholders in ADB, the continuation of such an involvement could be questioned.

The European Union and Germany announced their intention to suspend all development funds to the Taliban regime after taking over the country. This was confirmed by EU chief diplomat Josep Borrell last week after an extraordinary meeting of European foreign ministers. The EU had € 1.4 billion in emergency and development aid to Afghanistan between 2021 and 2025.

Under bilateral relations, India is one of Afghanistan’s largest donor and trading partners, investing more than $ 3 billion in irrigation, agriculture, hydropower, road construction and health projects. After the Taliban forcibly took over Afghanistan, trade relations with the country deteriorated, reaching $ 1.4 billion annually.

was an important channel for money transfers to Afghanistan. The company has now also ceased operations in Afghanistan, which has deprived the country of an inflow of foreign currency. The effects of the halt to foreign aid combined with a declining flow of remittances from the large Afghan diaspora could lead to a significant deterioration in the exchange rate of the local currency. The afghani’s exchange rate has already depreciated by AFN 10 per dollar, or 12%, since August 15, 2021, a decline unprecedented in the past two decades.

As Afghanistan’s international currency reserves freeze and international development aid dries up, the country’s ailing banking system may not survive long. According to current figures, between 69% and 75% of all deposits are held in foreign currencies. The Afghan central bank has little cash in its vaults. It is not allowed to access more than 2% of its total reserves as a large part of it is held abroad. Also, the central bank only has AFN 55 billion in local currency cash reserves, which may only be enough to keep commercial banks in cash for less than three weeks when there is a run on banks. The total deposits at all 13 commercial banks are AFN 255 billion, almost five times the reserves.

On Saturday, the current Taliban governor of the central bank published a circular advising banks to allow withdrawals of up to $ 200 per account per week. This restriction on cash withdrawals indicates that the Taliban regime is facing enormous financial constraints that could intensify in the coming days and weeks as banks open their doors to their customers. According to media reports, tens of thousands of depositors have lined up to withdraw their money and flee the country because they see no future for themselves and their families under the repressive regime of the Taliban. With such a large run on the banks continuing, the collapse of the banking system is imminent.

The short-sighted views of the Taliban on tribal norms and traditional Islamic values, coupled with the extreme interpretation of Sharia law, have created enormous unease among the population, especially among women. Since the day the capital fell, many media companies, including dozens of television channels, have either closed or significantly reduced their operations. The majority of barber shops, women-run beauty salons, wedding halls, music studios, film studios, and entertainment companies are on the verge of collapse. The result will be the loss of thousands of jobs and the livelihoods of millions of people.

The so-called global perception of a changed Taliban is slowly fading. The group has not changed in nature or ideology, nor has it made any progress in forming a more inclusive, broad-based government. Above all, however, the group’s promises of more freedom for women and minorities have so far remained unfulfilled. Your actions on the ground speak louder than your words. International human rights organizations have recorded hundreds and possibly thousands of serious human rights violations by the Taliban across the country.

Guest commentary like this is written by writers outside the Barron’s and MarketWatch newsroom. They reflect the perspective and opinion of the authors. Send suggestions for comments and other feedback to [email protected]m.