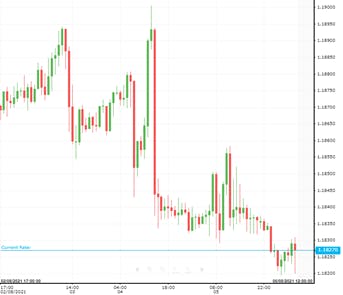 While the dollar has been trading stronger against other major currencies overall in the past few days, as the development of the USDX shows, while the greenback has appreciated against major currencies such as the euro and the Japanese yen (JPY), the trends in the emerging markets were quite mixed. The USD / MXN and USD / RUB pairs have been fairly stable overall over the past few days and the USD / INR pair has continued to move lower. Meanwhile, the USD / TRY pair was higher again, with gains exceeding 1 percent over the course of the week and on track to move to the levels the pair saw earlier this week.

Cryptos were traded higher overall last day, with some volatility being due to the now seemingly successful Ethereum hard fork, which will affect mining rewards and transaction costs, among other things. Bitcoin also managed to bounce back amid this positive sentiment, trading around $ 41,000 by Friday morning. One of the worst performing cryptos in the last week was Dogecoin with a 7-day closing performance of around minus four percent as the value stagnates at around USD 0.2 per unit.

Global equity markets were generally positive on Thursday, while the France 40 index hit a new all-time high. Some US indices such as the US 500 and the US 100 were also traded at new record levels. Despite the ongoing crackdown by the government in China, particularly against tech companies, the China A50 Index will close higher for the first time in six weeks this week after stabilizing in recent days.

As usual, on the first Friday of each month, the Nonfarm Payrolls (NFP) and the unemployment rate are published in the USA. Average hourly earnings and consumer credit statistics are also published on Friday.

The EUR / USD pair continued to move moderately down, driven by the strength of the dollar and the weakness of the European common currency as other pairs such as EUR / GBP or EUR / JPY also fell.

The data from Europe has been quite mixed in the last few days. While the order statistics of the German manufacturers unexpectedly improved by 4.1% in June, the key figure industrial production fell quite sharply in the same period and fell by 1.3% in one month. French industrial production has since recovered, as expected, to 0.5% monthly growth, while the trade deficit fell from € 6.8 billion to € 5.82 billion.

Industrial production data is also published in several other European countries such as Spain, where annualized performance was below expectations at 11.1%, or Italy with data pending.

Gold prices fell below $ 1,800 in spot markets for the first time in a week on Thursday, with the downward movement continuing through Friday morning. The stronger dollar and a recovery in interest rates such as the 10-year US T-Note benchmark could theoretically have had a negative impact on gold prices.

While palladium has been trading relatively stable in the last few days, a clear downward movement was also observed on the silver and especially platinum markets, the price fell to its lowest level since December last year, as a troy ounce was only slightly above the $ 1,000 at times. Brand was traded Friday morning.

On Friday, the weekly Commitment of Traders (COT) data of the US CFTC will be published, which among other things shows the speculative net positions in the US futures markets. Most recently, the number of such positions in gold futures rose to 199.4 thousand, the highest number since the beginning of June.

Sentiment in the stock markets was generally bullish, with the US Tech 100 and US 500 indices hitting new record highs on Thursday.

The best performing stocks on Thursday included travel industry stocks like Wynn Resorts (+8.08%), American Airlines (+ 7.60%) and Royal Caribbean (+ 7.35%), all of which ranked as a few for the day of the top performing components finished the S&P 500 index.