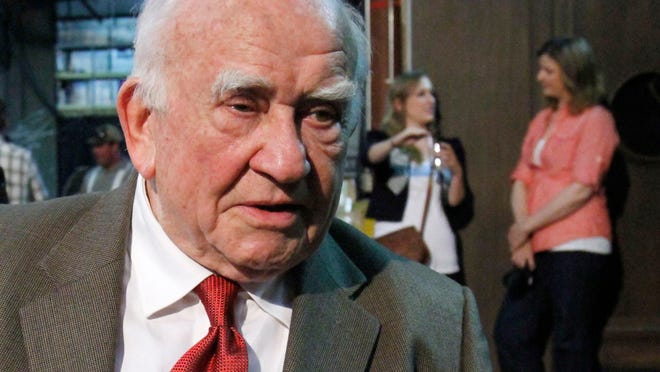 Edward Asner, known to millions as the gruff but lovable journalist Lou Grant, died Sunday at the age of 91.

His publicist Charles Sherman confirmed to USA TODAY that Asner died early Sunday morning at home with his family.

“We’re sorry to announce that our beloved patriarch passed away peacefully this morning,” read a tweet shared on Asner’s official Twitter account. “Words cannot express the sadness we feel. With a kiss on your head – good night, papa. We love you.”

The hard-drinking, badass Grant, who emerged from CBS ‘”The Mary Tyler Moore Show” and headline the drama spin-off “Lou Grant”, made Asner a household name. But he was much more than an indelible character.

Asner, a US Army veteran, has played a wide variety of roles over the course of his seven decades-long acting career, starring burly cop and five o’clock-shadowed heavyweights in pre-“Mary” dramas as he made himself popular with younger generations would not know Lou Grant from Ted Baxter in “Elf” from 2003 and “Up” from 2009.

His seven Emmys, five for the role of Grant in Mary and Lou Grant, are a record for a male actor, and Asner was the first actor to win Emmys for having the same character in both a comedy and a comedy Play drama series. He won his other two Emmys because he played tough, unsympathetic characters in two historical miniseries, “Roots” and “Rich Man, Poor Man”.

But if Asner, who put together 400+ screen credits, was only remembered as Lou Grant, that would be a lot.

WJM’s news director was an instant breakthrough in the pilot episode “Moore”. After an interview where today’s hiring managers would assess damages, Lou smiles at the polite but brave applicant Mary Richards (Moore) and says, “You know what?

When Mary smiles back and starts an aw-shucks response, Lou interrupts, goes dark and interrupts: “I hate spunk!”

It was a harrowing deception and blame for predictable television tropes of the era, like so much of Moore’s groundbreaking sitcom. Most of all, it was fun.

After her death in 2017, Asner spoke lovingly about Moore and parted ways with his TV alter ego. “She had semen,” he told USA TODAY. Did he hate that? “No. Not when she has it.”

When “Mary” premiered in 1970, Asner had no idea how it would be worshiped 50 years later. However, he quickly realized that it was something special. “As we began to work on it and shape it and circling it, it became very clear to us that we were doing the Lord’s work,” he said.

Over the course of the series’ seven seasons, Asners revealed several shades to Lou: impatience, anger, and even physical violence with Ted and sweetness and friendship with Mary, though he had a sexist streak himself for his time.

A married father at the beginning of the series, Lou went through alienation and eventually divorce. His fear and disgust for the sometimes beloved Sue Ann Nivens (Betty White, now the show’s last surviving lead member at 99) were a comical delight and solid talent pairing, while his friendship with Mary, despite an awkward and quickly discharged date, showed them real ones Character development. Lou had many mistakes, but there was always an opportunity for learning and salvation.

As Asner mourned Moore’s death, he thanked her professionally and personally. She “never missed an (opportunity) to move us forward. She took good care of us,” he said. “I loved her. The world loved her – and it should too. She was an inspiration to women and she was a good example as a person. “

Moore actually looked after Asner as MTM Enterprises, the production company she started with her then-husband Grant Tinker, Lou in a half-hour CBS sitcom from Minneapolis TV news director to Los Angeles newspaper editor in an hour-long drama.

Asner has done the impressive job of avoiding typing with his characteristic role, dampening Lou’s drinking and temperament – no longer physically throwing Ted out of the studio! – while highlighting his sobriety literally and figuratively and his commitment to shoe leather journalism in the post-Watergate era. The new version of Lou earned him two Emmys.

Previously, before “Mary” ended its seven seasons, Asner showed off his dramatic skills as angry immigrant father Axel Jordache in 1976 “Rich Man, Poor Man”, the first blockbuster miniseries, and then as slave ship captain Thomas Davies in the 1977s “Roots” , a hugely popular ABC miniseries and a cultural landmark that broke new ground in TV (and the country) talk about race.

Asner’s commitment to acting went beyond the big screen as the union-friendly progressive’s opposition to the 1980 actor strike deal resulted in his candidacy and eventual election as President of the Screen Actors Guild, which he held from 1981 to 1985.

At a time when a former SAG president, Ronald Reagan, had become a conservative idol because of his anti-union actions, among other things, Asner was devout and defiantly liberal in his political views.

In the years that followed, he spoke out on controversial issues, including support for the liberation of Mumia Abu-Jamal and sole health care, which many actors have stayed away from for fear of harming their careers. In 2017, he expressed solidarity with NFL players who kneeled down to protest racial injustice. He has also been involved in charitable work, working to help Holocaust survivors, immigrants, and the desperate, and to protect freedom of expression.

Asner, born in Kansas City to parents of Russian descent and raised in an Orthodox Jewish household, was married twice, from 1959 to 1988 to Nancy Sykes and from 1998 to 2015 to Cindy Gilmore, and had four children.

He took a detour to acting. After attending the University of Chicago, he worked on a General Motors assembly line and served in the US Army Signal Corps in Europe before helping found the Playwrights Theater Company in Chicago.

In the 1950s he went to New York, where he took part in an off-Broadway revival of the “Threepenny Opera” in 1956 and appeared in “Face of a Hero” on Broadway in 1960. Hollywood and television also beckoned: Asner made his first foray into “Studio One” in 1957, followed by roles in shows such as “The Outer Limits”, “Voyage to the Bottom of the Sea”, “Mission: Impossible”, “The Fugitive” “and” The Invaders “. He made his film debut in 1962 in “Kid Galahad”, an Elvis Presley film, and appeared in “El Dorado” by John Wayne in 1966.

Although his role as Lou Grant and the 1970s miniseries were Asner’s culmination of awards and fame, he remained busy in the years that followed. Movie roles included “Elf,” one of the many times he played Santa Claus, and the Oscar-winning Pixar animated film “Up,” in which he played the grouchy old widower Carl Fredericksen, which starred from dozens of dubbing over the years ..

For the past several decades, Asner has appeared regularly on television shows such as Thunder Alley, The Trials of Rosie O’Neill, The Bronx Zoo and Working Class, CMT’s first sitcom, and has made many guest appearances. Highlights include visiting art smuggler August March again, a character he played in an episode of “Hawaii Five-0” in 1975, in the relaunched 2012 edition Bloods ”,“ Modern Family ”and“ Cobra Kai ”.

Even before these later roles, Asner had received the Screen Actors Guild Lifetime Achievement Award and induction into the Television Academy Hall of Fame.

Asner was also on stage, including touring the country from 2010 as Franklin Delano Roosevelt in “FDR” and in 2012 with Paul Rudd in “Grace” on Broadway. It was also the subject of a 2014 documentary, “My Friend Ed”.