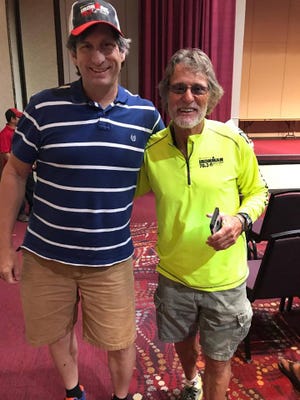 Mike Greer was a national and international face of triathlon, completed more than 400 races and, as a race director and tireless promoter, left a lasting impression on the common people he brought into the sport.

He founded the 91-competitor Buffalo Springs Lake Triathlon in 1990 and then built it to attract top professionals who viewed the West Texas course and summer climate as ideal preparation for the annual Ironman World Championships in Hawaii.

He was also President of USA Triathlon and later interim CEO.

Greer died early Wednesday at the age of 82 as a result of being recovered from a motorcycle wreck. He suffered the accident on June 27th on the way to and an hour before the start of the IRONMAN 70.3 Lubbock.

“He was such a force of nature, such a beautiful force of nature,” said Marti Greer, Mike Greer’s wife and liaison between the City of Lubbock and IRONMAN. “He inspired so many people with what he said, ‘I’m not a triathlete. I’m a triathlon person.’ He was never fast or talented (in triathlon), he was just persistent.

“He just loved the sport and loved the people in the sport, loved getting to know them all and tell them his full story.”

When Greer got into triathlon in 1984, he became a participant, volunteer, sponsor and race director and has remained visible and active for the past 37 years. He not only trained others in sports, but also in his “11 points of a healthy, ageless life”.

He took his motorcycle to the Buffalo Springs / Lubbock triathlons to monitor quality control and check the athletes.

Greer died just before 3 a.m. on Wednesday at Covenant Medical Center, his wife said 24 days after his accident. He was injured on E. 19th Street on the way from Ransom Canyon, where he lived, to Dunbar Lake, where IRONMAN 70.3 starts Lubbock. No other vehicles were involved.

He underwent emergency surgery that day for injuries including fractures to his ribs, pelvis and spine. After a week in intensive care and another week in hospital, he did about 10 days of physical therapy, occupational therapy and speech therapy, his wife said.

“He worked on it. He really worked on it,” she said. “He did it like a champion. But that accident was so traumatic.”

Greer grew up in Littlefield and attended college at the University of Houston and UT-Arlington as a running back in football and as a sprinter in athletics. He started endurance running in the late 1970s and ran 44 marathons.

It was a few more years before he found his calling in long-distance swimming, cycling and running.

In 1984 he took part in his first triathlon – the race in the Guadalupe Mountains. In September 2018, he completed his 400th and reached this milestone with the last eight 13 months after his stroke. In the end, he made 403.

“He had more than we had already registered for this year,” said Marti Greer, “but that happened.”

Describing Greer’s foray into triathlon, his wife described Greer’s foray into the triathlon: “He was very excited about the idea because Kona (at the IRONMAN World Championships) was regularly on TV once a year, and that interested him. It’s an attempt to try sprint triathlon , and you just get hooked.

“Then he realized that there was a perfect venue for triathlon (around Buffalo Springs Lake): a beautiful lake, beautiful cycling (track), and then running.”

To mark its 400th anniversary, a US triathlon story on teamusa.org found that Greer initiated and organized 50 events in Texas and the Southwest.

“You’re not in the race sponsorship for the money,” he said in the story. “It’s psychological income. I know I can’t make a deposit with it at the bank. But I have people who say, ‘This race changed my life. This sport changed my life.’ That right there, that keeps me going and that keeps me here. Just knowing that you had a positive impact on someone you just met, that’s cool. “

Another contribution from him was the idea of ​​the aquabike: a race of swimming and cycling for those who cannot walk.

“He did a lot of things to better organize the sport and help people who needed a different way of doing the sport,” said Marti Greer.

A viewing is scheduled for Sunday at 2 p.m. at the Sanders Funeral Home. A memorial service is planned for Monday at 1 p.m.

In addition to his wife, Greer leaves three daughters, a son, 15 grandchildren and eight great-grandchildren.