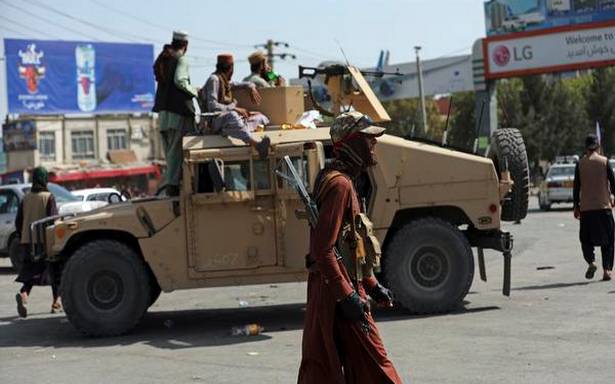 In a staggering defeat, the Taliban took almost all of Afghanistan in just over a week, despite the fact that the US and NATO had spent billions of dollars building Afghan security forces for nearly two decades. On August 15, the Taliban fighters entered Kabul and demanded the unconditional surrender of the central government.

A two-page “succinct” and “gloriously non-binding” affidavit filed by the government shortly before the hearing on Monday at the Supreme Court denying “anyone and everyone” allegations of using Pegasus to target journalists, activists, dissenters, Supreme court officials , Ministers, parliamentarians and the opposition called on petitioners who said the center should swear under oath through the Union’s Interior Minister in the Supreme Court on whether or not the government or any of its agencies used Pegasus spyware.

Following the overthrow of the West-backed government by the Taliban, thousands crowded into the Afghan capital’s airport on Monday, stormed the tarmac and pushed for planes to desperately flee the country. U.S. soldiers fired warning shots as they struggled to cope with the chaotic evacuation.

Wholesale price inflation was 11.16% in July, slightly below 12.07% in June, with price increases slowing for basic materials, food, and fuel and electricity, but gaining momentum for industrial products.

Former Assam MP Sushmita Dev has resigned as president of the All India Mahila Congress as well as a major member of the party. She joined the Trinamool Congress in the presence of the party’s Secretary General and MP Abhishek Banerjee.

The BJP did not make an official statement on August 16 regarding the Taliban’s takeover of Afghanistan, but two former secretaries-general of the party warned that India was not doing well and that the country should prepare for terrorist attacks. Former BJP general secretary and current board member of the RSS Ram Madhav tweeted that Pakistani support for the Taliban would lead to serious security problems in India.

August brings a new twist to actress Tamannaah as she hosts MasterChef Telugu, which will air on Gemini TV from the last week of this month. “Tamannaah is a fun and happy person; She is also a foodie, although eating healthy is her priority. The television audience will discover new facets of their personality, ”says director Sanjeev K Kumar of MasterChef-Shows in four South Indian languages.

The Delhi High Court has obtained the position of the central government on a plea on the alleged cyber security breaches and data leaks on the online platforms of BigBasket, Domino’s, MobiKwik and Air India.

The Chinese government said Monday it hoped the Taliban would ensure a “peaceful transition” in Afghanistan after quickly taking over the country. “The situation in Afghanistan has changed a lot. We respect the will and choice of the Afghan people, ”said Foreign Ministry spokesman Hua Chunying in Beijing.

Mohammed Shami scored the most important half century of his career while Jasprit Bumrah showed tremendous effort to bring India to 286/8 in their second inning when England’s chances of winning the second friendly wore off by lunch.

On Monday, Google commemorated the 117th birthday of the freedom fighter and poet Subhadra Kumari Chauhan with a striking doodle on its homepage.