The Afghan Economy in Charts: What Has Changed in Two Decades? 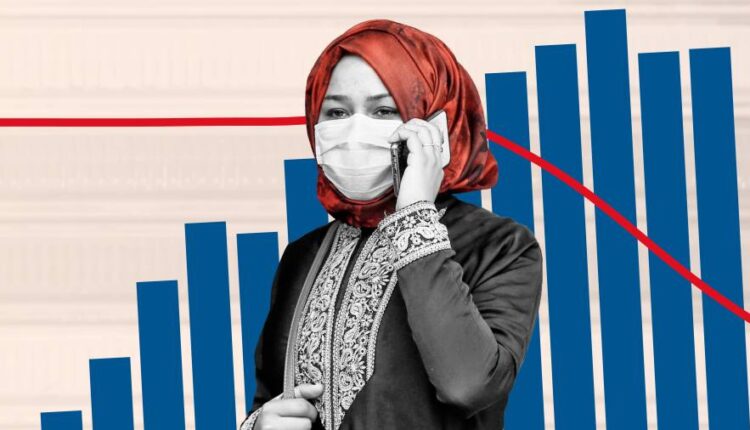 In the two decades since the Taliban lost control of Afghanistan, living conditions have improved significantly, including tremendous advances in health care, education, life expectancy and child mortality.

But endemic corruption and violence slowed progress, and the downsizing of troops and aid in recent years has diminished one of their greatest sources of income, with economic repercussions.

Afghanistan’s former central bank governor Ajmal Ahmady, who fled the country last weekend when the Islamist group returned to power, told the Financial Times that anyone who downplayed the improvement in Afghans’ lives “is belittling the changes that have occurred.”

But dr. Gareth Price, a senior research fellow at the Chatham House think tank, said that while Afghanistan has “changed dramatically” socially, “none of the major domestic growth engines – particularly mineral reserves – except illegal mining.”

The economy has grown – but is now stagnating

The standard of living benefited from double-digit economic growth until the mid-2010s. But production has stagnated for the past decade as international financial support declined.

According to the World Bank, aid flows fell from around 100 percent of GDP in 2009 to 42.9 percent in 2020, which restricted activity and employment in the service sector.

International money is expected to dry up completely under the Taliban and threaten the very survival of Afghanistan’s legal economy.

“Since much of the economic progress of the past 20 years has been built on outside support, Afghanistan’s return to global pariah status is likely to pull the rug out from under its feet,” warned Gareth Leather, Asian economist at Capital Economics . “A sharp decline in GDP and a decline in socio-economic development seem almost certain.” 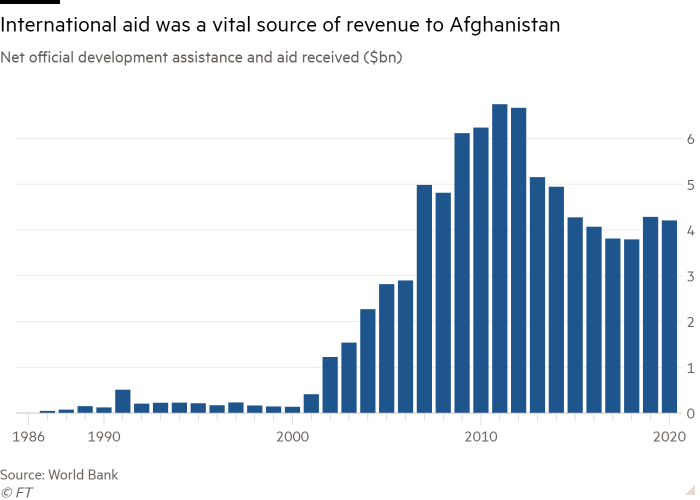 The end of aid “has the potential to cripple a large portion of the modern economy and service jobs,” said Anthony H. Cordesman of the Center for Strategic and International Studies, a think tank. He asked how Afghanistan could create a “legal” economy if aid stopped.

Afghanistan legally exported only about $ 1 billion in goods in 2020, according to the International Trade Center, a multilateral agency – less than neighboring Tajikistan, despite its population being four times larger.

Half of official exports consist of grapes and other fresh fruit, although the importance of agriculture has decreased with the expansion of the service sector. However, Leather warned that official data should be treated with caution, as “one of Afghanistan’s greatest products is illegal opium, which of course does not appear in the national accounts.”

Experts conclude that the informal economy accounts for up to 80 percent of total Afghan economic activity, so official growth estimates are of limited use.

Despite the patchy overall economic development, the everyday lives of many Afghans have noticeably improved. Health care and education became more widespread, death rates fell, and the use of technology became more common.

According to the World Bank, around 60 children under 5 died per 1,000 births in 2019 – that number has halved since the turn of the century, the fastest decrease in child mortality in any low-income country. 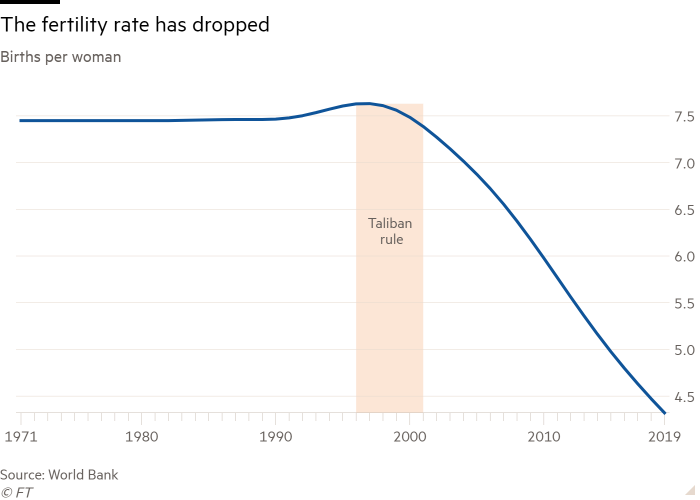 The proportion of underweight children has more than halved over the same period, and Afghanistan has seen a similar reduction in the risk of maternal mortality.

Health care has also improved through a number of interventions, and almost half of the population has access to sanitation, up from a quarter in the early 2000s. 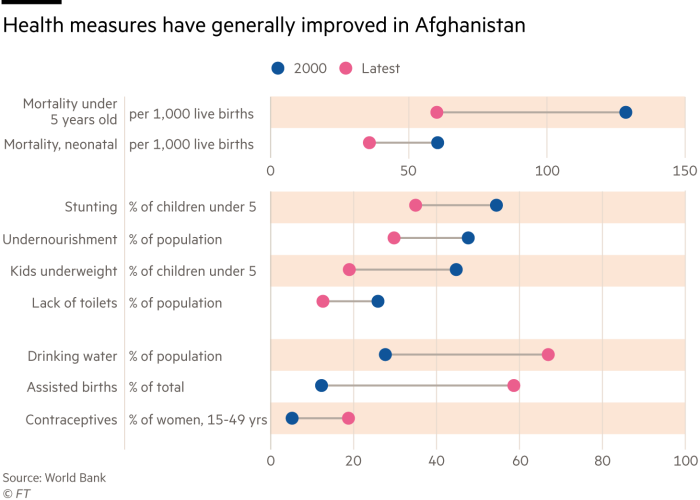 As a result, Afghans are living almost 10 years longer today than they were two decades ago.

School performance has also improved significantly. There are 8.2 million more children in school than in 2001, and the proportion of children enrolled in secondary education rose from 12 percent in 2001 to 55 percent in 2018. 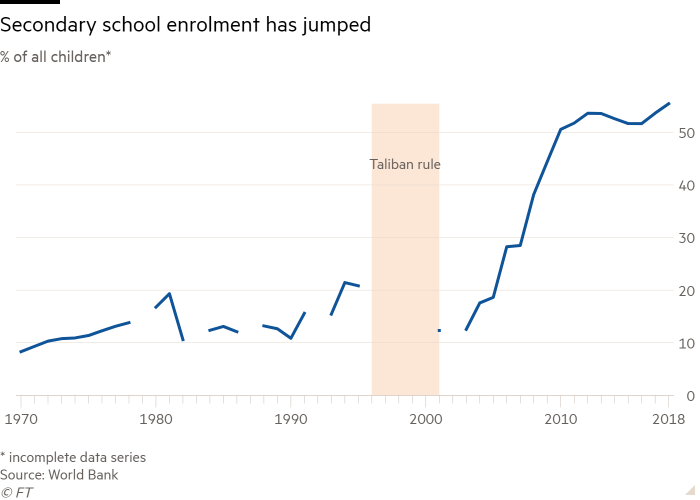 However, he stressed that due to limited information, the data available are sometimes “estimates”. 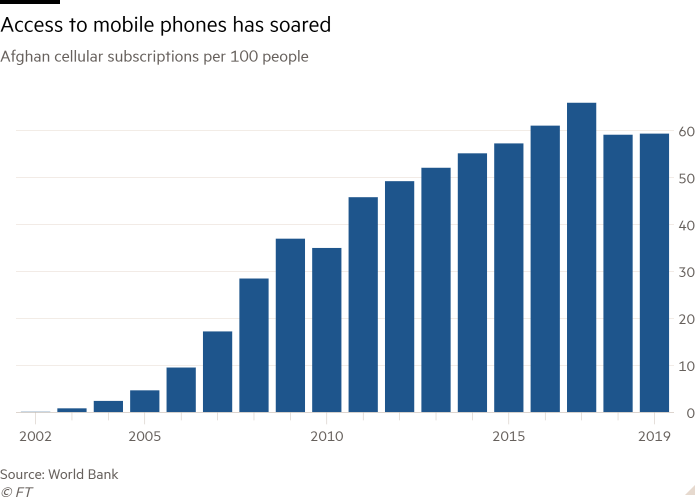 Women in particular have benefited

Women’s lives have improved based on a number of indicators. The number of girls in education has skyrocketed, youth fertility rates have fallen and many more women are employed. 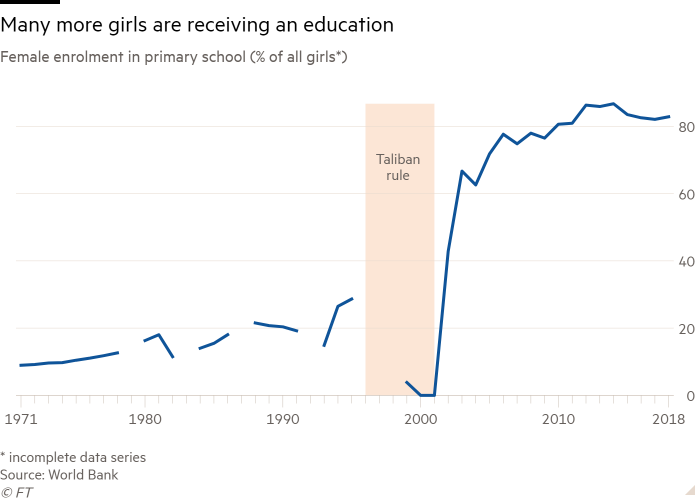 “There has been tremendous progress in the education of girls in the past two decades,” said Susannah Hares, co-director of education policy at the Center for Global Development, a think tank. However, she warned that “these are now at great risk of being withdrawn quickly. . . we are likely to see many, many Afghan girls being forced to drop out of school ”. 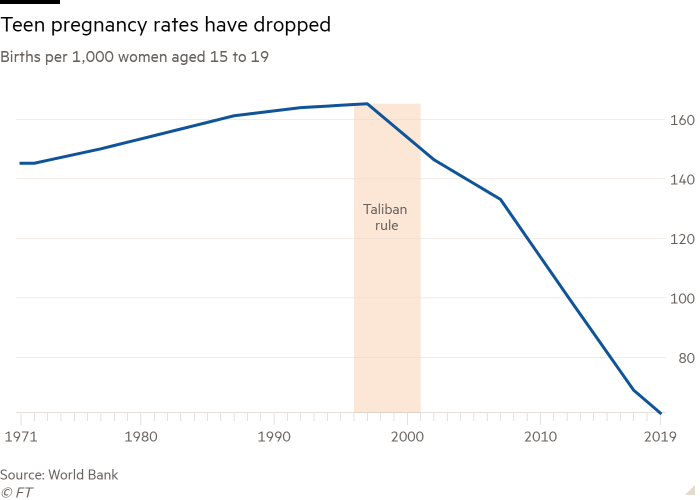 Women also entered the labor market to a much greater extent than before. Last year around a fifth of Afghan officials were women and one in four seats in parliament was held by women – up from zero in 2001.

But violence and poverty are still widespread

Despite the progress, the Taliban have taken over one of the world’s weakest economies. There is hardly a country that is less hospitable or more corrupt.

Afghanistan was in Transparency International’s corruption index in 2020 at 165 out of 180 countries – although it has increased by 11 places since 2012.

“The development and diversification of the private sector is hampered by insecurity, political instability, weak institutions, inadequate infrastructure, widespread corruption and a difficult business environment,” said the World Bank, which rated Afghanistan as 173 out of 190 countries in its 2020 Doing Business Survey . 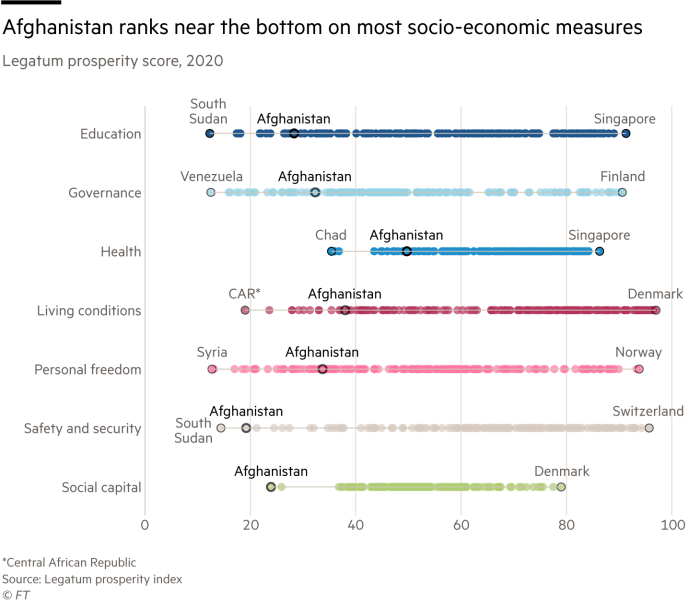 The standard of living is the lowest in the region and more than half of the population lives below the poverty line. In terms of health, personal freedom, living conditions, trust in institutions and security, Afghanistan is still one of the worst in the world.

Even so, former central bank governor Ahmady warned that reversing the progress of the past two decades would have a significant impact on the lives of ordinary Afghans.

“You have a situation in Afghanistan where everyone has a cell phone, and that’s a lifeline for many people,” he said. “There has been significant economic progress and [the coming deterioration] I think that will be a shock for most of them. “