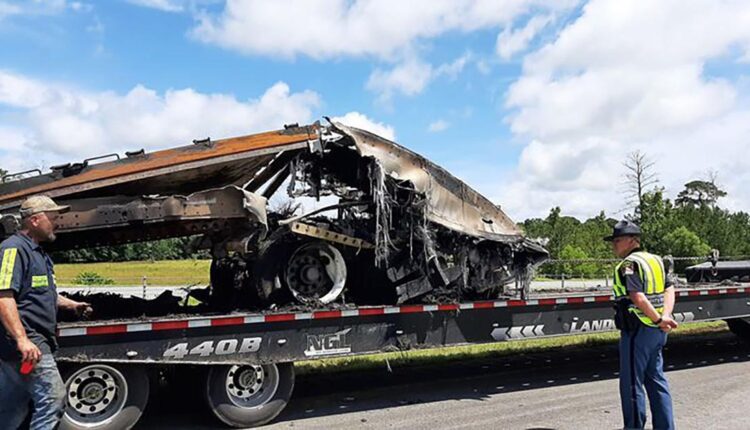 MONTGOMERY, Alabama (AP) – An accident that killed 10 people – including nine children – on a rain-soaked Alabama highway occurred after a semi-trailer truck hit vehicles that were slowing down due to minor accidents, according to a preliminary report were released Tuesday.

The National Highway Safety Board’s initial findings on the fiery June 19 accident that involved 12 vehicles chronologically map events, but do not assign cause or blame as the agency continues investigations.

Eight of the victims were in a van from a youth home for abused or neglected children. According to the report, the van was hit by two commercial vehicles. A Tennessee man and his baby were killed in another vehicle.

The report says that a utility vehicle carrying an empty trailer used to move automobiles encountered a traffic queue on Interstate 65 that had slowed and stalled due to previous minor accidents. The utility vehicle operated by Hansen & Adkins met a 2020 Ford Explorer SUV before turning left and hitting the youth home van.

The SUV overturned and collided with several other vehicles standing in line.

A semi-trailer truck operated by Asmat Express then got on top of the stopped vehicles, turned left, hit and climbed the bridge railing, and then hit the van. The van and truck stopped in the median.

The multiple collisions caused a fire that burned the trucks, delivery van, and three other vehicles, the report said.

Neither Hansen & Adkins, based in Los Alamitos, California; or Asmat Express, based in Clarkston, Ga., responded to phone messages and emails for comments.

The report notes that the National Transportation Safety Board is still working to determine the likely cause of the crash, “with the intent to issue safety recommendations to prevent similar accidents.”

Four girls at Tallapoosa County Girls Ranch, a home for abused and neglected children, were killed in the crash. The only survivor in the van was the home manager, Candice Gulley, who was behind the wheel. Two of Gulley’s children and two of her nephews also died in the crash.

Gulley had taken the group on an annual trip to the Alabama coast sponsored by the Girls’ Ranch.

The pile-up was the most devastating blow from a tropical depression that also claimed three more lives and destroyed dozens of homes in Alabama when it triggered flash floods and tornadoes.

A deep dive into why Missoula’s local economy is thriving