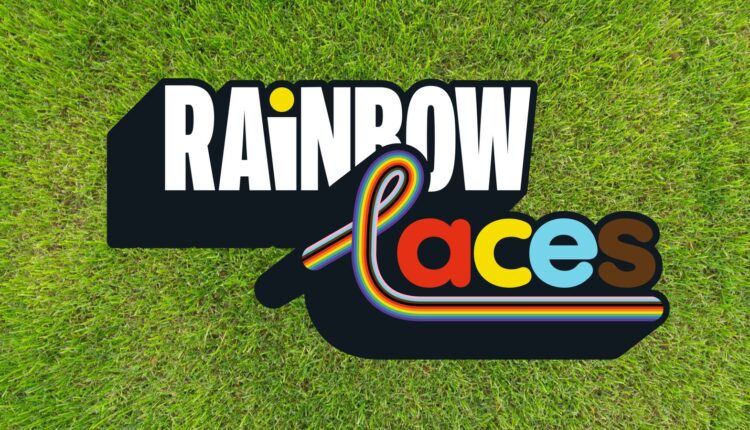 “Lace Up and Speak Up” is the key message for this year’s activation of the Rainbow Laces campaign to integrate LGBTQ + into sport.

The Premier League and EFL will be among the competitions this weekend that will launch a visible show of support and cover Sky Sports.

With a fresh look and focus, the central appeal of the campaign is for athletes, coaches, officials and fans to wear shoelaces while contributing to conversations that help lesbian, gay, bisexual and transgender people feel welcome and at ease feel sports rooms and surroundings.

Research last year by ICM for Stonewall, the equality organization that coordinates Rainbow Laces, found that one in five sports fanatics still believes anti-LGBTQ + language is harmless if only meant as a joke.

However, the campaign continues to make a significant difference. The same 2020 survey found that two-thirds of sports fans who have seen Rainbow Laces believe they have a responsibility to advocate for LGBTQ + fans of the teams and sports they follow – an increase over the previous statistic.

12 million people get involved in the initiative every year, either by wearing shoelaces, through social media or through events. In addition to various shoelace designs, there are also badges with the new logo, headbands and captain’s armbands. 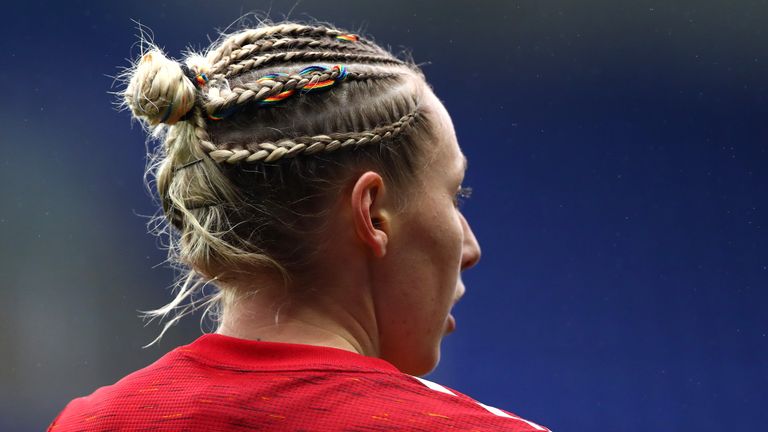 Image:
WSL clubs will support LGBTQ + people during their December games – Manchester United’s Leah Galton wore the laces in her hair in 2020!

During the summer Pride celebrations, English skipper Harry Kane and teammate Jordan Henderson were among the players demonstrating alliance at Euro 2020.

Since then, a total of over 200 LGBTQ + athletes have participated in the Tokyo Olympics and Paralympic Games, while Josh Cavallo’s coming-out story made headlines around the world in October and received thousands of welcome responses, including from famous figures across football like Marcus Rashford and Zlatan Ibrahimovic.

Only last weekend the seven-time F1 world champion Lewis Hamilton made a strong statement on the way to victory at the first Grand Prix of Qatar by wearing a rainbow-colored helmet with the slogan “We Stand Together”.

Please use the Chrome browser for a more accessible video player

Stonewall’s program director Liz Ward is encouraged by advances in inclusion in sport in 2021, but says concerns remain.

A recent study found that across Europe, eight in ten (82 percent) of physically active LGBTQ + people have experienced homophobia, biphobia, and transphobia in the past 12 months.

“Few things bring us together as much as exercise, fitness and physical activity,” says Ward, “and it’s inspiring to see so many people, clubs, leagues, gyms and partners coming together for the Rainbow Laces season. Since the campaign began, we’ve seen awareness grow and grow, with over a million shoelaces modeled in boots on the playing fields around the world.

“But there is still a long way to go before every lesbian, gay, bi, trans and queer person can bring their whole self into the sport they love.

So this year we want Rainbow Laces to take inclusion to the next level and start a conversation about what creating inclusive environments for LGBTQ + people in sport really means.

“Whether you are a team, an athlete, a fan or a player, your voice makes all the difference. Together we call on people to get involved in the integration of LGBTQ + and to really make sport a game for everyone. “ 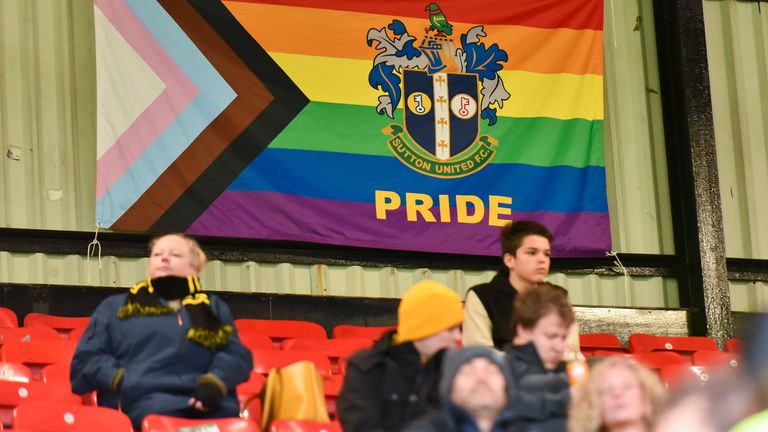 Image:
EFL newbies Sutton United is one of over 50 clubs in the English leagues that have their own LGBTQ + support group

Since 2016, Sky Sports has been a member of TeamPride – a coalition of organizations working with Stonewall to strengthen the Rainbow Laces campaign. The Premier League, Barclays, Coca-Cola, adidas, TikTok, Unilever and Voltarol are also helping to communicate the message this year.

Steve Smith, Executive Director of Content at Sky Sports, said, “We’re passionate about delivering the drama of live sports and telling stories about the people who make these moments possible.

“We continue to proudly support Rainbow Laces as a member of Team Pride, raising awareness of the inclusion of LGBTQ + on and off the pitch, and promoting active allies.”

In addition, the list of Stonewall Sport Champions who act as campaign ambassadors has been expanded. The 2021 group will be joined by UFC fighter Molly McCann, England netball internationals Roses Stacey Francis-Bayman and Natalie Panagarry, and rugby player Devin Ibanez. 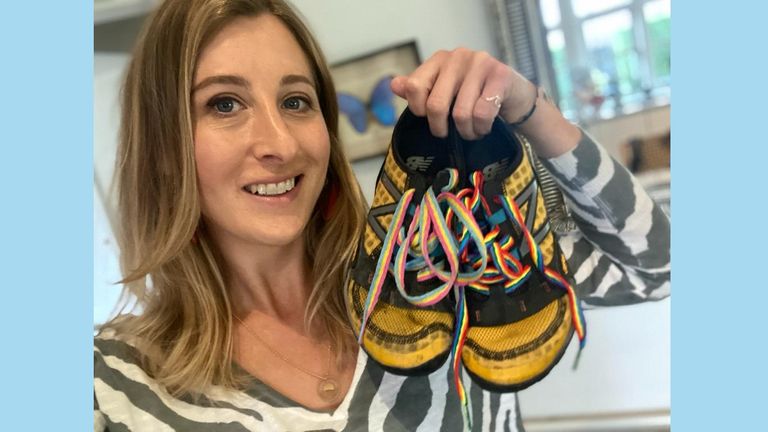 All 20 Premier League games, which take place between Saturday 27 November and Thursday 2 December, are dedicated to Rainbow Laces. Clubs will show their support through a variety of matchday activities, with branding in each stadium and video content with discussions between players of men and women as well as members of LGBTQ + fan groups focusing on the power of meaningful conversation and allies.

The Premier League will also introduce new educational resources for elementary and secondary school children. These Stonewall-supported resources are designed to empower young people to tackle bullying and offensive language.

Premiership rugby games, the PDC Players Championship Finals in darts and the netball test series England vs. Jamaica are just some of the events in other sports where the campaign is activated. 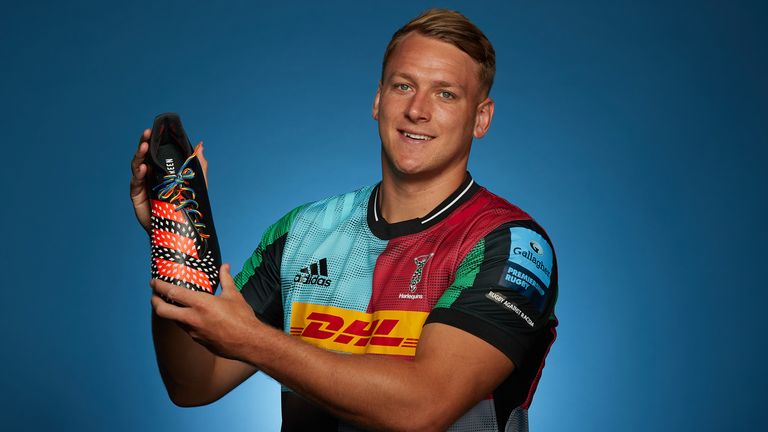 Check out Sky Sports News on Thursday for more information on the launch of Rainbow Laces 2021.

Sky Sports is a member of TeamPride, which supports Stonewall’s Rainbow Laces campaign, which is activated from November 25th to December 12th annually.

The Day – Local celebrities and politicians go-kart race for charity