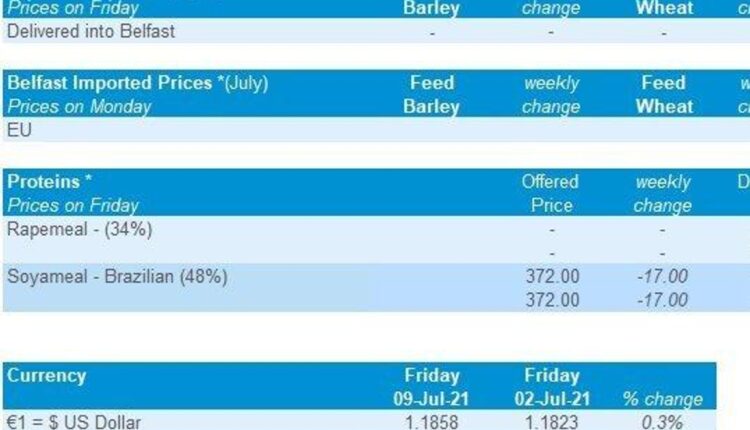 Wheat – The outlook for production in Europe and the Black Sea remains positive as the harvest begins. This and the rain for US corn are weighing on prices. The price outlook beyond the next few weeks depends on the harvest results.

Corn rains in the US Midwest reduce concerns about 2021/22 shipments and push prices down in the short term. Unless the weather turns hot or Chinese buying picks up, this bearish tone could linger well into the next several weeks. 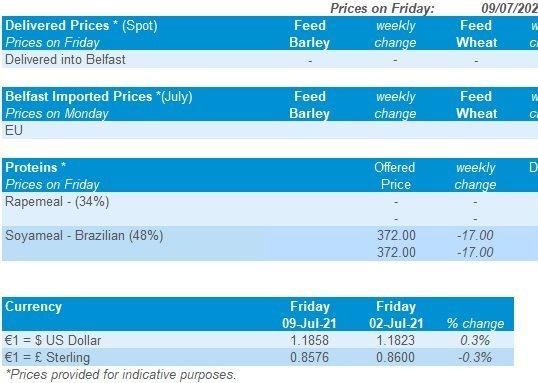 Global Markets – Rain in the US and harvest advances in Europe and the Black Sea depressed grain prices last week. The selling of speculative traders ahead of the USDA’s global supply and demand report likely also contributed to the decline.

Last week’s rains have benefited US corn plants, which are in their critical growth phase. With more rain forecasts, especially in the heart of the Midwest, confidence in U.S. shipments in 2021/22 appears to be growing. In the meantime, China has remained calm on the export markets. If this continues, this could indicate lower import demand in 2021/22.

The winter barley harvest in France remains slow due to the wet weather. FranceAgriMer reports that by July 5, 10% of the crop had been harvested, up from 2% on June 29, but significantly below last year (61% completed). Wheat is now also being harvested in France, Ukraine and Russia, where the pace is also slower than last year. However, the start of the harvest weighs on prices as stocks will soon be replenished.

Conab now estimates the Brazilian corn harvest in 2020/21 at 93.4 million t, 3.1 million t less than in June. This is significantly lower than the 98.5Mt the USDA forecast in June, but it is still above many industry forecasts. The market reaction has been limited, however, suggesting that a smaller crop may already have been factored into prices.

Harvest timing will be important to UK prices. UK shipped prices for July were practically unchanged last week (Thu-Thu). However, crop prices fell in line with the futures markets. In East Anglia, feed wheat delivered in July was reported at £ 198.00 / t, a decrease of £ 0.50 / t from July 1st. Meanwhile, harvest deliveries fell by £ 7.00 / t to £ 163.00 / t.

Britain has signed a trade agreement with Canada but is starting negotiations to “improve” it. As it stands, the deal will most likely involve wheat. Canadian wheat could potentially displace some German e-wheat imports to the UK.

Canola – Hot and dry weather in the Canadian prairies is currently weighing on the canola crop, which may have an impact on production prospects. This could have further effects on exports, which are currently forecast at 10 million tonnes for 2021/22 (AAFC).

Soybeans – Widespread rains in the American Midwest are fueling soybean development and creating optimistic production prospects that give the 2021/22 marketing year a bearish tone.

Global Markets – Chicago Soybean Futures (Nov. 21) fell 5% last week. Much of this pressure is due to welcome rains in the American Midwest. For the past week all major soybean producing states except parts of North Dakota, Minnesota and parts of Kansas have rained.

Despite this rain, parts of the American Midwest still experience prolonged droughts. Especially in Iowa and Minnesota (as of July 6), 67% and 93% of the area are still referred to as “drought”.

This could have an impact on soybeans when they enter the pod filling phase in August. However, the 7-day forecasts predict more rain in the US, which will help alleviate some of those drought worries.

In line with soybean pressures, the Chicago soybean oil contract fell 2.2% over the week (December 21).

There was also a volatile week for Brent crude oil. The nearby contract closed 0.8% to $ 75.55 / barrel over the course of the week.

There was a little more pressure on our domestic market than on the Paris futures, as the pound sterling appreciated against the euro (+ 0.40%) and closed at £ 1 = € 1.1692 on Friday.

Hot and dry weather in the Canadian prairies negatively impacts the grown canola crop and affects production prospects. For the next two weeks, parts of the prairie are forecast to have a temperature of over 30 ° C, which is unusually high for the time of year.

Danny Ings: The Southampton striker’s contract situation is “not perfect”