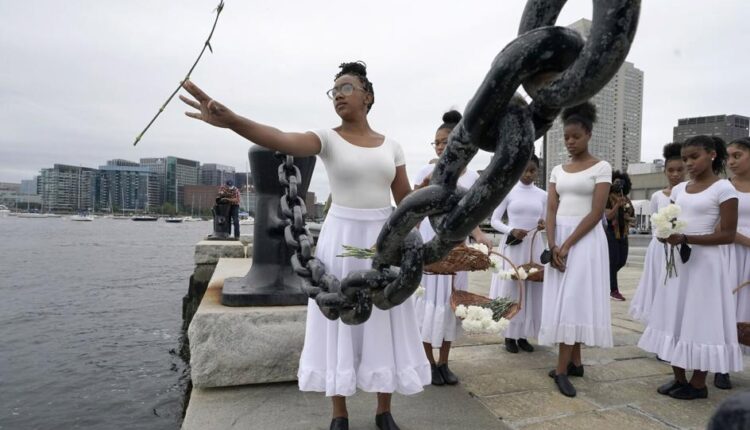 BOSTON (AP) – A public notice to commemorate the enslaved Africans who were forced to travel across the ocean to work in America was officially dedicated on Sunday in downtown Boston on the waterfront.

The Middle Passage Port Marker was installed at the end of Long Wharf overlooking Boston Harbor last October. It is designed to recognize Boston’s history of slavery and honor the Africans who were forced on the transatlantic voyage known as the Middle Passage.

Names of enslaved members of Boston’s oldest churches were read aloud, and there was a traditional balafon performance by Balla Kouyaté, as well as a land recognition statement from Elizabeth Solomon, a member of the Massachusett tribe in Ponkapoag.

According to the organizers, millions of Africans were sold in the Caribbean and American cities such as Boston and Newport, Rhode Island, from 1619 to 1865. Native Americans from local tribes, including the Massachusett, Wampanoag, and Nipmuc, have also been enslaved after being taken prisoners of war, the organizations said.

The marker is part of a wider effort to install historical markers at each of the 31 UNESCO-identified Middle Passage sites. Due to the ongoing coronavirus pandemic, the event was by invitation only, but was broadcast live.