Flames reveal their secret workings when freed from the effects of gravity, so burning things in space may help us get more energy from less fuel back on Earth

IF YOU are floating in Earth orbit in the life-sustaining bubble of air that is the International Space Station (ISS), surrounded by nothing but a frigid vacuum, the last thing you want is a fire on board. So it may sound worrying that, for the past decade or so, NASA has been lighting fires up there on purpose.

“Any time you mention starting a fire on the ISS, you’re going to raise a lot of eyebrows,” says Daniel Dietrich at NASA’s Glenn Research Center in Cleveland, Ohio. However, these particular incendiary escapades are perfectly safe.

Fires can’t start in space itself because there is no oxygen – or indeed anything else – in a vacuum. Yet inside the confines of spacecraft, and freed from gravity, flames behave in strange and beautiful ways. They burn at cooler temperatures, in unfamiliar shapes and are powered by unusual chemistry.

But the reason NASA is starting fires in orbit goes beyond mere aesthetics. It is chasing a deeper understanding of fire itself. Studying combustion in microgravity is beginning to enhance our ability to harness its power down here on solid ground. That could bring huge benefits through flames that emit less polluting gas or allow engines to run more efficiently. 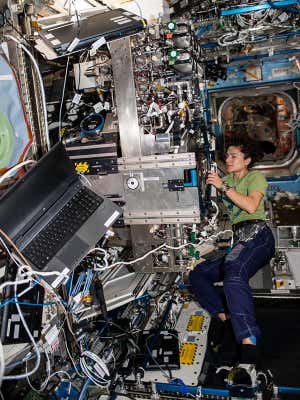 Humans have been entranced by fire for almost as long as we have existed. Archaeological remains suggest that our ancestors were controlling fire 1 million years ago. Doing so was a crucial precursor to the invention …