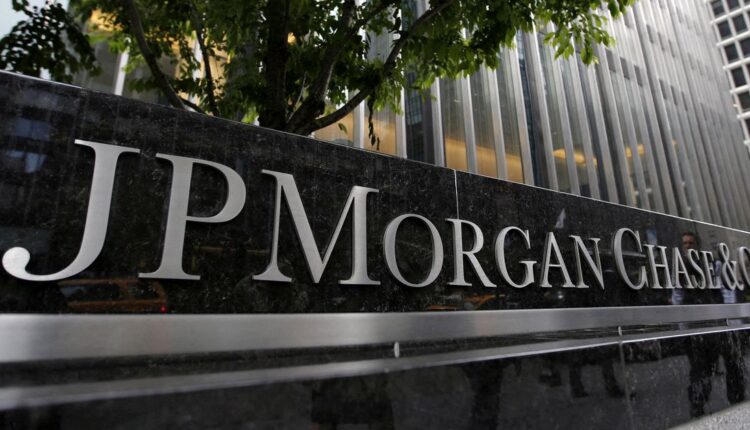 A view of the exterior of JP Morgan Chase & Co. corporate headquarters in New York City May 20, 2015. REUTERS/Mike Segar

Jan 14 (Reuters) – JPMorgan Chase & Co (JPM.N) on Friday posted fourth-quarter earnings that beat market expectations, but its shares fell as much as 6% as analysts expressed disappointment with its forecast for the expressed future profitability.

The country’s largest bank warned that its return on tangible equity (ROTCE), a key metric that measures how well a bank is using shareholder money to generate profits, could fall below its 17% medium-term target this year.

A slowdown in capital markets activity, the cost of investing in the business, including new technology and branch openings, and rising spending partly due to higher inflation and labor costs were some of the factors the bank cited as headwinds for the coming year.

However, it maintained a medium-term target of 17% ROTCE after 2022 and said it expects to benefit from rising interest rates and longer-term business growth stemming from its investments.

This forecast disappointed some analysts and investors. JPMorgan shares, which had enjoyed a strong run ahead of the results, fell 5% in mid-morning trading, the biggest drop among U.S. bank stocks.

The bank reported a 14% year-over-year decline in fourth-quarter profit, reflecting a decline in trading revenue. The previous year had benefited from increased trading activity, as the US Federal Reserve’s stimulus measures ensured more liquidity on the stock and bond markets.

The Fed began scaling back its asset purchases in November 2021, resulting in lower trading volume.

This slowdown was only partially offset by a stellar performance from JPMorgan’s investment bank, where revenue rose 28% and loan growth rose 6% across the firm.

However, rising inflation, a potential economic slowdown from Omicron and trading earnings returning to normal levels will challenge banking industry growth in the coming months.

Wells Fargo analyst Mike Mayo expressed frustration at the bank’s failure to meet its ROTCE target this year and the time it will take for investments to translate into profits.

“They say we have to wait two years for the 17% ROTCE despite the booming economy,” Mayo said. “You’re in it for the long term, but many investors don’t plan to invest over a 10-year horizon.”

Dimon replied: “I feel your pain and frustration. It is very possible that we will have a 17% ROTCE in 2023. It depends on how we use our capital, in the bond markets and so on.”

Banks face cutthroat competition to hire and are forced to pay more to recruit and retain talent. L1N2TU1LW

“We want to be very, very competitive on pay,” Dimon said. “If that squeezes margins, so be it.”

During the quarter, JPMorgan maintained its position as the second-largest provider of global M&A advisory after Goldman Sachs, according to Refinitiv. The rankings rank financial services firms by the amount of M&A fees they generate.

Regarding the slowdown in trade, Barnum said the bank expects some normalization this year but still expects revenue to remain above 2019 levels.

Overall, the lender posted earnings of $10.4 billion, or $3.33 per share, for the quarter ended December 31. According to data from Refinitiv, analysts had estimated $3.01 per share.

Reporting by Anirban Sen in Bengaluru and Matt Scuffham in New York; Edited by Saumyadeb Chakrabarty and Nick Zieminski

Alaska’s seafood industry is proving critical to the economy

KSCP Stock IPO: When Will Knightscope Go Public? What is the KSCP share IPO price range?