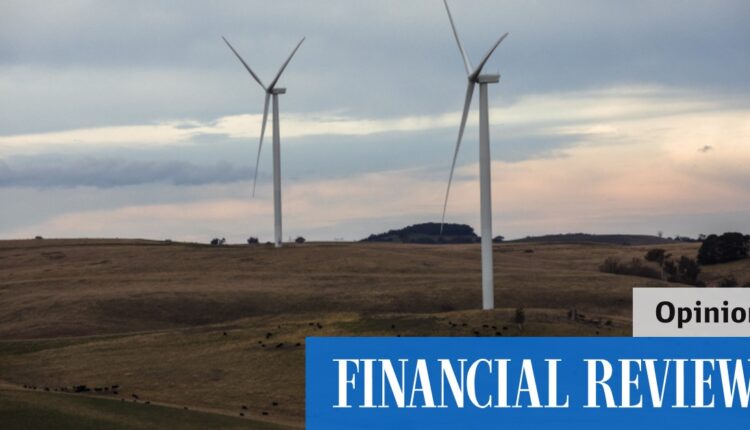 Adapting to change is in Australia’s DNA. Australia is a resilient and resourceful nation that has adapted and responded to the challenges of a harsh but generous country.

If you yell at the climate, it won’t go away. As Federal Treasurer Josh Frydenberg noted, climate doesn’t have a zip code – it’s not an obscure city-bush debate.

It also does not recognize geographic borders or international borders.

As Frydenberg noted, private financiers and investors have already committed significant funds to support businesses capable of moving and accelerating progress toward a low-carbon future. Businesses can achieve green growth by serving new and growing markets created by the low carbon transition.

On the other hand, financiers, insurers and investors are increasingly choosing to withhold their funds to those who are at risk of unwilling or adapting to climate change. For them it is a question of risk and future return.

The numbers and global commitment to a green economy are breathtaking. According to The Economist, Bloomberg, and the World Bank, $ 178 billion ($ 243 billion) of capital was poured into green mutual funds in the first quarter of 2021; By 2030, the EU’s Green New Deal will provide $ 1 trillion in public and private investment; and $ 5 trillion in low-carbon investment by 2030 is proposed under the Biden Proposal for Climate and Environmental Justice (of which $ 1.7 trillion comes from US federal funds).

The actions and commitments by Australia’s trading partners to achieve net zero targets by 2050 underscore the need for Australia to commit to an inspiring and transformative roadmap that will catalyze green, clean and innovative technologies.

Australia is running late, with 68 percent of the world economy (by GDP) and more than 80 percent of our trading partners already committed to net zero.

The stupidity of the debate in Australia is that we have seen climate change as an environmental problem that is at odds with economic growth.

While policy makers are debating it, companies are already acting, and companies that we normally don’t associate with this debate – miners and farmers – are taking action on climate change.

The reality is simple. First, inaction on climate change will slow the economy and cost jobs.

Third, regional Australia will create more jobs and more income as investment flows drive new investment in our regions and create the new platform for Australia as an energy superpower.

Fourth, with the rest of the world shifting, Australian exports will be hit hard if we don’t transition now, especially given the upside potential of $ 47 trillion for Asia Pacific economic growth over the next five years if the world and our The region is responding to climate change. That’s a dividend that Australia needs to invest in to keep jobs and growth.

The next wave of innovation will revolve around the transition to a green economy, with the energy and industrial sectors at the heart of the change. If done well, the development of the green economy will offer tremendous opportunities and growth.

Australia needs to build a national mindset that is prepared and ready for change, fosters innovation and diversity, and builds new and adaptable skills.

We need to improve our cross-industry connections and neighborhoods within Australia and with other countries. Taking on and living entrepreneurship is key to creating a future-oriented economy.

The chance for Australia is now to adopt a net zero roadmap by 2050 and an ambitious target by 2030.

Governments have a responsibility to protect their citizens and the sovereignty of their country. This includes the challenge that a changing climate poses for Australia, our region and the global community.

Setting ambitions and goals will be the focus of COP26 in Glasgow, with Australia’s voice being key to a meaningful and actionable roadmap for net zero.

Michael Rath is Deloitte’s lead partner in energy, utilities and renewable energies in the national and Asia-Pacific regions.

Pradeep Philip is the Head of Deloitte Access Economics.

Alerus appoints new CEO as it builds on the momentum of the IPO, a major acquisition