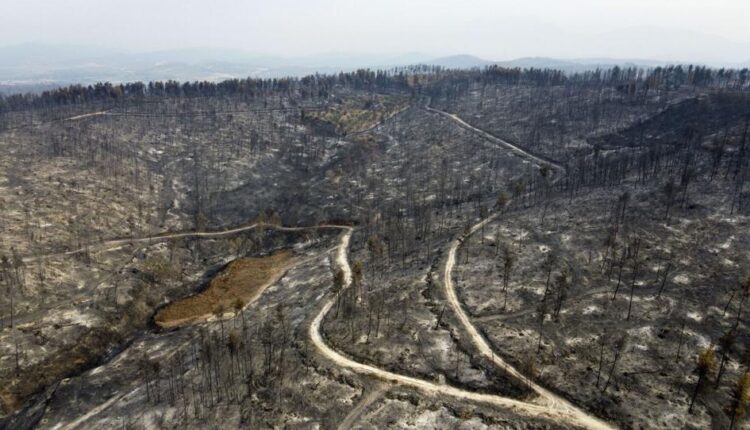 Athens, Greece (AP) – Greek Prime Minister Kyriakos Mitsotakis said on Thursday that the devastating forest fires, which burned across the country for more than a week, were Greece’s biggest ecological disaster in decades.

The fires broke out as the country roasted during the most intense and protracted heat wave in around 30 years. Hundreds of forest fires broke out across the country, pushing Greece’s fire-fighting capabilities to the limit and prompting the government to seek help from abroad. Hundreds of firefighters came along with planes, helicopters and vehicles from 24 European and Middle Eastern countries to help.

“We managed to save lives, but we lost forests and property,” said Mitsotakis, describing the forest fires as “the greatest ecological disaster in decades”.

Mitsotakis said during a press conference in Athens, his first since the fires started, that authorities face around 100 active flames every day. By Thursday the situation had improved significantly and most of the major forest fires had receded.

But the prime minister warned that there was still a risk of further fires.

“It’s mid-August and it is clear that difficult days are ahead” until the main season, in which the fires break out, is over.

“This is a common crisis for all of us,” he said, noting that climate change is a global problem.

The biggest fire broke out on Greece’s second largest island, Evia on August 3, and smoldered on Thursday after devastating much of the north of the island.

According to mapping by the European Union’s Copernicus Emergency Management Service, more than 50,900 hectares were damaged in North Evia. Whole mountains with mainly pine forests were reduced to bare, blackened tree stumps, olive and fig tree plantations and vineyards were also destroyed.

The government prioritized protecting lives in their firefighting and issued dozens of evacuation orders for villages exposed to the flames. In this respect, the policy seems to have worked. A volunteer firefighter died while working in a major fire area north of Athens after sustaining a head injury from a falling power pole. Four volunteer firefighters were hospitalized with burns, including two in critical condition in intensive care.

The Greek authorities were careful to avoid repeating what happened in the summer of 2018 when fast moving wildfire ravaged a seaside settlement near Athens, killing more than 100 people, including some who tried To escape the flames and smoke drowned by sea.

However, the current tactic of issuing evacuation orders has been criticized by many residents and local officials in the areas hit by this year’s fires, who argued that the orders were premature. They point out those who ignored the evacuation messages, stayed behind to fight the flames and save their homes.

The government has also come under fire for not deploying enough fire-fighting planes and helicopters and not deploying them early enough, especially to Evia. Authorities countered that the planes were flying wherever possible, but that it was impossible to keep the entire fire fighting fleet in the air at the same time as some would have to land for essential maintenance.

When asked about the cause of the fire and suspected organized arson, Mitsotakis said it was “certain that some of the fires in recent days were arson”. Days on suspicion of attempting to start fires, including some who are deliberately accused of doing so.

However, he added it was unclear whether this was due to an organized plan, noting that the hot, dry conditions had favored the spread of forest fires.