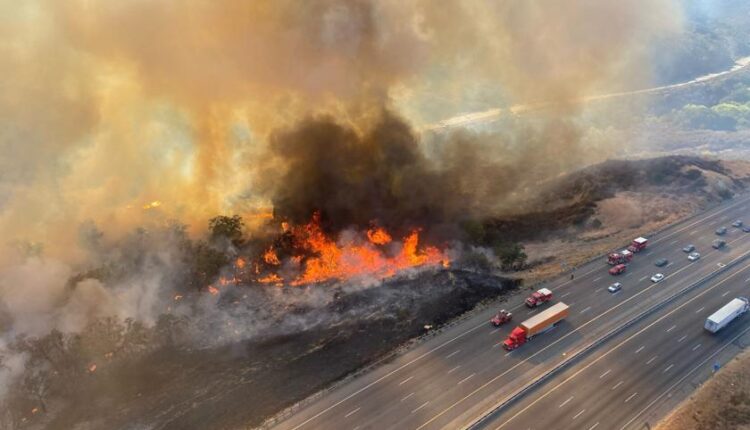 The fire, known as the Route Fire, reached 392 acres, or just over half a square mile, in size at 6:28 p.m. and forced the closure of a section of Interstate 5, the Angeles National Forest told KTLA-TV.

KTLA reported the Route Fire building is at risk, according to the Los Angeles County’s Santa Clarita Valley Station.

The fire was no longer contained around 6:30 p.m., the authorities said.

The storms, which rolled from Thursday night to Friday, were followed by weekend forecasts for clear weather and a warming trend in the fire areas into the next week.

The National Weather Service said there were more than 1,100 cloud-to-ground lightning strikes in California between Thursday evening and Friday morning. According to the fire brigade, at least 17 fires were ignited by lightning strikes.

Firefighters were diverted from the huge Caldor Fire south of Lake Tahoe to tackle multiple nighttime lightning fires across El Dorado County, firefighters said. Most of the fires, however, were kept to less than 4 acres.

Three new fires have been reported in Sequoia and Kings Canyon National Parks in steep, dense forest areas of the Sierra Nevada.

Up to half an inch of rain fell on parts of the Dixie Fire, which began in mid-July and blew through vast swaths of the northern Sierra Nevada and southern Cascades. The second largest fire in California history burned 1,490 square miles (3,859 square kilometers) of land and more than 1,300 homes and other buildings. It was 59% included.

The rain wet tinder-dry vegetation and will cool the fire for a day or two, which the firefighters hoped to reinforce and expand the fire lines with to finally surround the fire, firefighters said.

Celebrities mark 20 years since 9/11 attacks: ‘We must never forget’