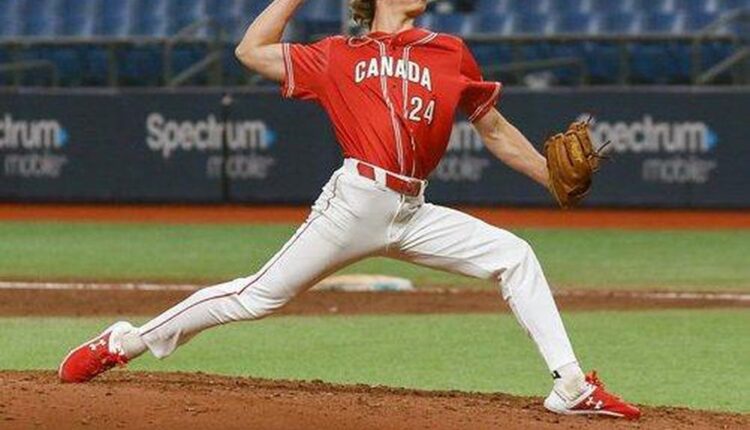 The 17-year-old Douro resident and native of Peterborough hopes it won’t be the last.

The 12th-grade student at St. Peter Secondary School played for Canada’s junior national team in the Friendship Series against the United States in September.

Four of the five games, a sixth that was rained out, were played at MLB spring training facilities, but Burgess started the one game at Tropicana Field, home of the Tampa Bay Rays.

Despite giving up a home run to Elijah Greene, prospective MLB No. 1 draft for 2022, Burgess said it was a special moment.

“It was incredible,” he said. “There is no way to describe the rush of emotion I felt as I stepped onto the field with the Maple Leaf in front of my chest. It was an experience like no other.

In July he received a call from Baseball Canada’s head coach and director of men’s national teams, Greg Hamilton, also from Peterborough, who invited him to the junior team’s training camp in Ajax in August, where he caused a stir.

“It kind of surprised me,” Burgess said. “It was a cool experience. Very exciting.”

The six-foot-tall, 195-pound right-handed pitcher has been identified by the Canadian Baseball Network as a potential player for the 2022 MLB draft.

He had a 1.90 ERA ratio and 17.9 strikeouts per nine innings for the Toronto Mets 17U of the Canadian Premier Baseball League last season. The Mets were 22-7 and lost in the CPBL Finals.

The next step in his baseball career will be NCAA Division 1 baseball. Burgess recently signed to the University of Illinois Fighting Illini.

He attended a few US schools but became interested in Illinois after his Canadian roommate Liam Adamson signed on there.

“I really enjoyed everything the program had to offer. The pitching coach and I got along very well. We shared the same philosophies and ideas. We hit it off and all the coaches were great,” Burgess said.

“They’re in the Big 10, which is a great conference. They are a higher academic school and academics are very important to me.”

Four of his Canadian teammates have since signed for Illinois.

“Obviously it’s nice to go to school and know a few people,” he said.

It’s part of a path that Burgess hopes will lead him back to an MLB hill.

“I’ve always wanted to play baseball at the next level, in the minor leagues, the major leagues. I knew I could get closer to Division 1 baseball and develop further. That was my main goal, getting a Division 1 scholarship,” he said.

Burgess played in the Peterborough Baseball Association through his 16U season when he joined the Oshawa Legionnaires 17U for a season before joining the Mets.

He said all of his coaches have had an influence on his development, including the Tigers coaches, but it all started with his father, Greg Burgess.

“He was my first pitching coach and created a lot of the mechanics I have today,” Parker said. “He coached me all the way up.”

His other Tigers coaches included Bob Davidson, Steve Murray, Shawn Micks and Ryan Hagerman with a special shout out to Steve Terry.

“I spent many hours at Riverside Park over the summer working with Steve Terry. He was a huge influence on my baseball career and helped me tremendously,” Burgess said.

Djokovic, Prince Andrew and Britney: Why we love to watch celebrities in the court room