The Very Large Telescope in the Chilean Atacama desert

The distribution of dark matter in the universe may be 10 per cent smoother than thought, potentially upending our understanding of the evolution of the cosmos.

Today, scientists announced results from the seven-year Kilo-Degree Survey (KiDS), using the Very Large Telescope (VLT) at the European Southern Observatory in Chile to observe more than 30 million galaxies in the universe up to 10 billion light years from Earth. Those results reaffirm previous indications about the spread of dark matter.

“The universe appears to be less clumpy than our best theory of the universe at the moment would suggest,” says Catherine Heymans at the University of Edinburgh, UK, the study’s lead author. “It (would) mean there’s more to understand out there.”

Following the big bang 13.7 billion years ago, our universe went through a period of inflation and expansion, leaving behind remnant heat in the process that we can observe today – the cosmic microwave background (CMB) – which shows us the spread of matter throughout the universe.

However, a variety of dark matter studies over the past few years have begun to show a discrepancy between the CMB and the measured distribution of dark matter, which makes up about 85 per cent of the mass of the universe. The KiDS results find further evidence for that discrepancy. 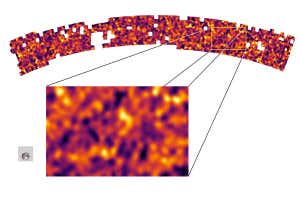 The survey examined the light bent, or lensed, by the gravitational pull of dark matter in about five per cent of the universe as seen from Earth. This was combined with observations of the clustering of galaxies from a separate survey, called the Baryon Oscillation Spectroscopic Survey (BOSS), to provide an accurate measurement of the spread of dark matter.

While other surveys have also conducted similar research, this latest study was noticeable for its level of accuracy, says Alan Heavens at Imperial College London. “They are the most precise (results) that have been published so far,” he says.

If the findings are correct, they could have some broad implications. It could mean that gravity on large scales is different than thought, with the rate at which matter falls into dense regions of the universe, as predicted by Einstein’s theory of general relativity, slower than predicted. Or it could be that our understanding of dark energy, thought to be the driver behind the accelerated expansion of the universe, is far from complete.

“This kind of discrepancy was not expected from our physical model of the universe,” says Elisabeth Krause at the University of Arizona. “The jury’s still out whether there is an explanation in the follow-up systematic effects we have to model, or if this is actual new fundamental physics.”

Further surveys are under way, such as the international Dark Energy Survey, to provide more data on these results. And not everyone is convinced about the findings just yet. “It’s one of those tantalising results that is not enough on its own to say we need to overthrow everything,” says Heavens.

But if results from other surveys suggest a similar smoothness to dark matter, it could be the start of some interesting new physics. “It’s another crack in the model,” says Heymans. “It’s still on that edge of starting to feel uncomfortable.”