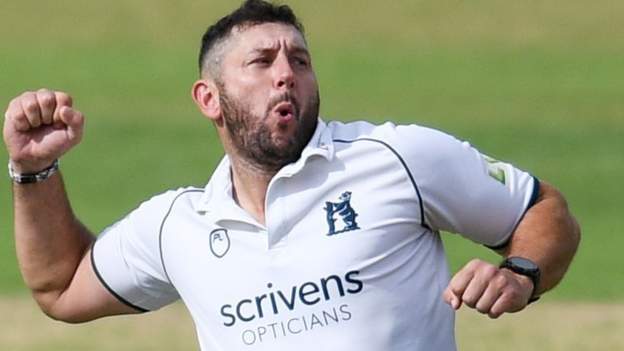 Tim Bresnan, who spent 19 years with Yorkshire, came back to watch the Tykes make his first red ball appearance for the Bears at Headingley

Warwickshire beat Yorkshire with 106 runs to keep his county title ambitions alive and to put an end to the hopes of his opponents.

The Tykes continued 50-3 on day four, chasing 224 to win but were knocked out for only 117 within the first session.

Gary Ballance beat Chris Woakes to the second slip with the third ball of the day, with ex-Yorkshire sailor Tim Bresnan making six catches in the innings.

Warwickshire moves up to second place and is hosting a runaway Somerset next week.

The Bears go into the final round of the games with 55 points, three and a half points behind Division One league leaders, Hampshire, who will join their rivals Lancashire on Tuesday.

Fourth-placed Nottinghamshire, who have the other side with a chance to lead the table in an exciting final, ends at home against Yorkshire.

Yorkshire must win this game and hope that other results will find their way to stand a chance of second place and the final of the Bob Willis Trophy on September 28th at Lord’s.

Bears pounce after the wash on Tuesday

Both Yorkshire and Warwickshire were frustrated in their pursuit of victory when the match was rained out on Matchday 3.

But the guests made up for lost time at Leeds on a pitch that seemed very difficult from the moment the Tykes won the throw and decided to play on Sunday.

After Ballance’s crucial early release, home wickets fell regularly as veteran Bresnan proved himself safe hands in the slips and picked up Harry Brooks Low Edge, a shot from the end of the toe of Jordan Thompson’s racket – the most resisted at 18 52 balls – and a nick from Steven Patterson.

Another catch for the former English all-rounder would have set the record for catches in an innings jointly held by ex-bear all-rounder Rikki Clarke, who won nine in the 2011 match against Lancashire in Aigburth.

In addition to his important second innings of 36 with the bat on Monday, Bresnan also caught Dom Bess lbw.

The English all-rounder Woakes – at his first championship start in three years – Liam Norwell and Craig Miles all finished with three wickets each.

Norwell got the last wicket when Ben Coad chipped him on Midwicket to seal Yorkshire’s fate.

Michael Burgess’ 66 for Warwickshire in the first innings proved crucial in a low-scoring game, and his team now have a real chance to become district champions for the first time since 2012.

“Woakes wants to play next week”

“It was disappointing to end the way we did this morning because when people play Yorkshire they know we are a tough team to beat. We were a little soft about the game not over lunch Thanks to Warwickshire, they “I’ve bowled well throughout.

“You have to grab key moments in games to win trophies and that first inning was a key moment. If we had beaten better we could have put the game to bed. We are on that journey and have made progress this year.” . It is another step in the right direction. “

“I’m so happy with the team. We showed a lot of character to recover from our slow death last week. We gave away a game we should have won against Hampshire.”

“We had three chances to get it to bed and we didn’t. And the worry or worry is that this game has a hangover. We then lost the throw and hit both innings in dark cloud.

“But we showed the character and the ability to be on the right side, which was a big win in the end. To position yourself so that you can win the last game of the season with a chance of everything, that’s all. ” ever want. “

For Chris Woakes availability for next week: “He loves the club and wants to play. It’s all about whether England will allow him to play. We hope the lack of cricket he’s had lately allows him to play.”

“We hope the ECB gives a person who is a bear through and through and hasn’t played a lot of cricket the opportunity to help their team win a championship. These opportunities don’t come very often.”