AMID rising global numbers of daily coronavirus infections, a fresh flush of vaccine trial results is offering hope for the longer run.

There are more than 160 coronavirus vaccines in development around the world. About 140 of these are at the preclinical stage, meaning they are still being looked at in laboratories and in animal tests. Another 25 are already being tested in people.

The rate at which the tally has risen to 160-plus is unusually fast. “What is phenomenal is the numbers changing over the past few months. The amount of research is incredible,” says Sheuli Porkess at the Association of the British Pharmaceutical Industry.

As the candidates advance, the World Health Organization (WHO) this month started to convene a working group to prioritise the most promising vaccines. “Practical realities will require a process that focuses global efforts on a small handful of candidates that may have the highest impact,” the WHO said.

Four vaccines have made big steps in development in the past few weeks. Initial trials show that they can trigger an immune response and appear safe – but it is too early to say if they will protect against coronavirus and whether they will work across many different groups of people, including older individuals and those with chronic health issues. 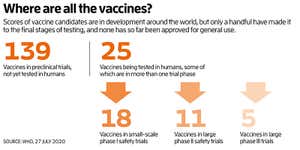 On 20 July, a team led by Sarah Gilbert at the University of Oxford and pharmaceutical company AstraZeneca showed that their ChAdOx1 nCoV-19 vaccine produced the desired immune responses without showing serious adverse reactions. That was in a combined phase I/II trial of 1077 volunteers (see “Trial phases”, below). It is now being tested in many thousands more people.

Six days earlier, US company Moderna and the US National Institute of Allergy and Infectious Diseases revealed that 45 people had received their mRNA-1273 vaccine and shown an antibody response. On Monday, they began a phase III trial intended to have 30,000 participants.

The other two most promising candidates are from CanSino Biologics in China, which published encouraging phase II trial results on the same day as the Oxford team, and another from German company BioNTech with pharmaceutical giant Pfizer, which published a promising preliminary report on 14 July.

At this stage, we don’t know which, if any, of the vaccines will succeed. “The eyes of the world are on these that are closest. But without being pessimistic – I’m being realistic – drug development is a risky business,” says Porkess.

The much larger phase III trials in coming months, involving thousands of people, will give a better idea of which vaccine might be deployed first. “This is the pointy end, this is when you are getting into real-world testing of a vaccine,” says Margaret Harris at the WHO.

Any vaccines that are successful in clinical trials will still need to be manufactured at scale, which will affect the time it takes to get a vaccine for general use. “We are seeing things happening at unprecedented speeds. Maybe something could (be licensed for use) within 18 months from now,” says Porkess.

Phase II
A greater number and diversity of people are tested, to see if it triggers an immune response

Phase III
Involves hundreds or thousands of people, including a control group to see if the vaccine works in the population at large

Combined phases
Because of the urgency of the current pandemic, some phases are happening in parallel