The world’s jungles absorb a large proportion of our CO2 emissions, helping to slow the pace of human-induced global warming. But they may be reaching saturation point

Jungle in the shadow of Rincón de la Vieja, a volcano in north-west Costa Rica that is often obscured by clouds

This article was produced in partnership with the Pulitzer Center on Crisis Reporting.

A CLANK like a monk’s gong rang out as the researchers marched single file up a forested flank of the Rincón de la Vieja, an active volcano in north-west Costa Rica. When they stopped alongside the giant buttressed roots of a strangler fig tree, graduate student Nel Rodriguez Sepulveda of Michigan Technological University held up a small steel chamber, the source of the sound. Katie Nelson, a fellow grad student, tapped her tablet and a machine strapped to Rodriguez-Sepulveda’s back began to buzz, noisily sucking air from the steel chamber through a hose. After a few minutes, Nelson glanced at her screen. “It’s elevated!” she whooped.

I had joined the scientists on a hunt for a notorious gas that seeps imperceptibly from fissures in the volcanic bedrock. They had come to map the places where it is more highly concentrated in the air than normal, in preparation for an experiment that could finally solve a mystery with profound consequences for the fate of our planet: whether tropical forests will continue to soak up large amounts of carbon dioxide, crucially slowing the pace of climate change. 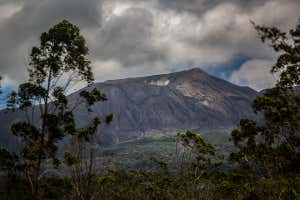 We have always assumed as much. But increasingly we aren’t so sure, raising the prospect that global warming could unexpectedly accelerate. Now the race is on to find out how rising temperatures will affect the ability of …