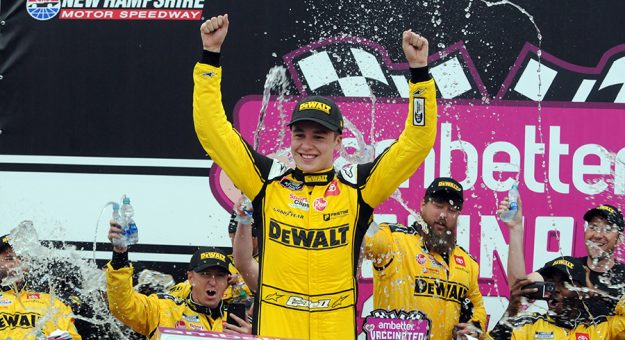 LOUDON, NH – Christopher Bell made a successful return to the NASCAR Xfinity Series on a Saturday afternoon at New Hampshire Motor Speedway.

The triumph came aboard the No. 54 Joe Gibbs Racing Toyota, which with three different drivers – Bell, Kyle Busch and Ty Gibbs – has visited the Xfinity Series winning road eight times. It was also the third consecutive Xfinity Series win for Team No. 54.

“What I found out is that I really have to drive very fast race cars. I just love being here at Joe Gibbs Racing, ”said Bell. “Man, it feels good to win.”

He briefly lost the lead when some cars did not pit between stages one and two, but quickly returned to the top on lap 55 and also controlled the second stage. He remained in the lead at the start of the third stage and was more than four seconds ahead when the warning flag was waved in Patrick Emerling’s accident on lap 149.

Bell retained the lead during a lap of pit stops during the caution period and held a challenge from Justin Allgaier during the restart, during which Allgaier made several attempts to overtake Bell inside.

That was the last challenge for Bell when he slowly broke away from Allgaier, who was fighting for second place with Daniel Hemric. At the checkered flag, Bell crossed the finish line 6.241 seconds ahead of Allgaier, who only just left Hemric behind and finished second.

In contrast to the races in previous years, the event on Saturday was driven on the track without PJ1 traction mix. Bell believes this could give him an advantage if he competes in the NASCAR Cup Series race on Sunday.

“I think on these weekends without practice or qualifying you don’t sit in the car until the green flag falls, that’s a really big advantage,” said Bell, who led 151 of 200 laps on Saturday afternoon. “Hopefully it will be similar and I really hope that we have a really fast Camry tomorrow.”