A tiny camera that hitches a ride on the backs of beetles can wirelessly livestream footage from a bug’s eye view.

Shyam Gollakota and his colleagues at the University of Washington in the US have developed a small steerable camera that can be affixed to beetles to transmit footage from their surrounding environment in real time.

The camera uses Bluetooth to stream footage to a smartphone at a resolution of 160 by 120 pixels, and at a rate of between one and five frames per second. It sits on a mechanical arm that can be remotely controlled to pivot the camera frame left and right.

Capturing footage while beetles move has a power-saving advantage over insect-like robots or drones, says Gollakota. “That mobility really drains the battery a lot,” he says.

“By combining these two different things – living animals with sensors – you’re basically getting the best of both worlds,” says Gollakota. 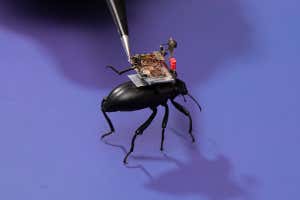 The camera is powered by a lithium polymer battery. When streaming continuously, it can run for over an hour, says collaborator Vikram Iyer, also at the University of Washington. The device also includes an accelerometer; the camera can be programmed to only capture footage when the beetle is moving – in this case, the battery lasts for up to six hours.

In total, the device weight just over half a gram, and it can be removed from the beetles.

The researchers attached the backpack to two different beetle species, the death-feigning beetle (Asbolus laevis) and the Pinacate beetle (Eleodes nigrina), which are known to be able to carry loads of a similar weight. They say the beetles lived for more than a year after the experiment ended.

In their current system the team has no control over where the beetles choose to move. Using tens or hundreds of beetles would enable more comprehensive monitoring or mapping out of an environment, says Gollakota. “As they spread out you can collect enough information that you don’t need to control the insects,” he says.