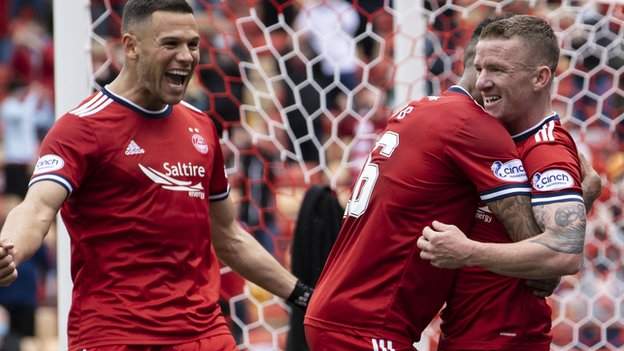 Aberdeen started the Scottish Premiership season with a dominant win over Dundee United in Pittodrie.

After missing wins and goals in four attempts against United last season, Stephen Glass’s side were able to make amends against Northeast rivals.

Jonny Hayes pushed the hosts forward after United failed to handle a long ball and Christian Ramirez headed in after a fine game from Calvin Ramsay.

And they were rarely harassed defensively against a limp United.

It strengthens Aberdeen ahead of Thursday’s Europa Conference League third qualifying round against Icelander Breidablik.

The defeat, however, continues United’s problems on opening day, as the Tannadice side have not started the peak season with a win since 2014.

If there was one game where goals were due, it was this. Last season there had only been one in three league games, despite United’s best performance of the season in the 3-0 Scottish Cup in Pittodrie.

The Thomas Courts team needed a similar performance at the start. However, the early game plan was clear – the home side was frustrating.

Aberdeen dominated possession but struggled to find their way through the sea of ​​white shirts. It took until the 27th minute for both sides to get a shot on goal, but it was one that hit the net.

Lewis Ferguson played a long ball in the way of Hayes, who had received the freedom of Pittodrie. United goalkeeper Benjamin Siegrist tossed him off the ground on his belated slip, but the Dons winger had done enough to get the ball over the line.

Both teams had chances at halftime. Jay Emmanuel-Thomas’ ball over the goal almost hit Hayes on the back post, then Liam Smith swung a ball for Ian Harkes to shoot a header from six yards away.

The guests finally showed more offensive will, but quickly in the second half Aberdeen put an end to their chase with the second goal.

Ramsay sold Mark Reynolds the day after he turned 18.

Aberdeen went looking for more, but still found it difficult to get shots on target; Jack Mackenzie’s deflected shot from distance caused little trouble for Siegrist.

United have made changes to change the flow of the game. Harkes had an easy long-range shot to save, and Logan Chalmers shot high and far, but they rarely looked like a comeback.

Man of the Game – Calvin Ramsay

Aberdeen had a lot of possession and seemed safe in possession, but there was no chance after other with a square United in front of them. Nevertheless, they showed enough quality to more than deserve the three points.

United started the game way too deep and they needed the opening goal to show what they can do in the opposing half. Given this evidence, it could be a long season ahead of us.

Aberdeen will be in Iceland for the first leg against Breidablik (8:00 p.m. CEST) on Thursday, before the Scottish Premiership (3:00 p.m.) to Livingston on Sunday. United will host the Rangers on Saturday (12:30 p.m.).

Growth risks for the economy are increasing