“It’s a gift to play the best on their way out of the sport,” says Raducanu | tennis

As Emma Raducanu asked questions ahead of her Western & Southern Open debut in Cincinnati, a crooked smile slowly spreading across her face and her head jokingly in her hands. It’s a familiar sight in her press conferences these days, as at every stop on the tour she follows the same question, phrased differently, and often differently, by local journalists: Feel the pressure?

“I just lost count of the number of times I’ve been asked that question,” she said. “If I lose 2,000 points, so be it, I’ll start at the bottom again. I know I can do something no one has done before. I qualified and won the US Open, so I can start over, I can start from scratch and I’m not afraid of that.”

It may well be a valid topic to bring up for a player who has produced one of the most amazing Grand Slam title runs in recent years and has gone 13-17 as a qualifier since winning the US Open, but also her frustration at when she tries to build her experience and tackle all the steps of her development.

“I just think that everything that’s happening right now should probably just be in my journey and I’ll have to go through those stages of development at some point because I missed them,” Raducanu said. “I went from playing the 25K to winning the US Open.”

The next step of this journey will be unforgettable. On Monday night, the first feature match of this year’s tournament, she will take the court to face Serena Williams in what is likely to be the penultimate stop of the American’s Farewell Tour. As many players of her generation have spoken openly about their hope that Williams would be drawn into their sections, that privilege is hers. 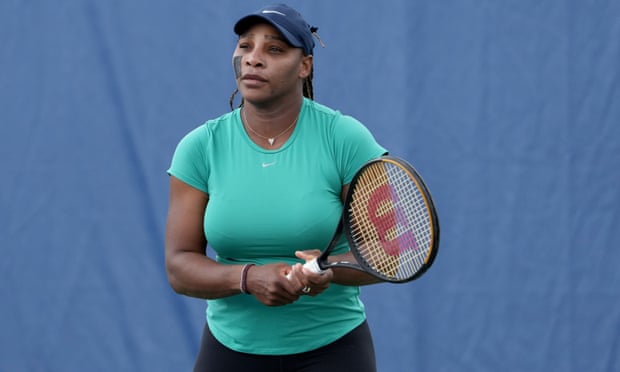 “I think it will be an exciting match. I look forward to it. It’s a fantastic opportunity to play against what is probably the greatest tennis player of all time. It will probably be my last chance to ever play it,” she said.

“I think that after our careers have overlapped, I’m really happy that I get to play her. Whatever happens, I think it’s going to be a really good experience for me and something to remember for the rest of her life.”

Raducanu does not know tennis without Serena as the sport’s transcendent, towering presence that she has been for the past two decades. Williams was No. 1 with four Grand Slam titles and already had a Hall of Famer career when Raducanu was born.

Before William’s name was drawn next to her, their most inclusive interactions were the brief minutes they practiced at neighboring Toronto courts last week before practice was halted almost immediately due to rain, and a few brief greetings exchanged in the hallways.

Raducanu said her most vivid memory of Williams was being taken to Wimbledon with her coach and another young up-and-coming player when she was around seven years old.

“I remember the highlight of my year was when I was young, at a tennis club, my first coach took me and another boy to Wimbledon on my day. Then we would take the tram. We kinda got on center court and watched her wreck somebody one and one. It was just really cool to see them live. That day with my first trainer I was so excited for the day. I think that was a very special time in my life, a memory I will always have.”

After Dmitry Tursunov was unable to join her in Toronto due to pre-existing plans, Raducanu resumed their trial partnership this week. On Saturday, she and Tursunov continued her preparations as she trained with new Wimbledon champion Elena Rybakina, who finds herself in the familiar position of bracing for a life-changing Grand Slam title win.

With Tursunov continually giving hints, his relaxed demeanor was in stark contrast to the prickly interactions between Rybakina and her coach Stefano Vukov. “He’s here, we’re continuing the process,” Raducanu said. “Mainly we just have to see how we work together, how we complement each other. That’s it I think. It’s too early to tell.”

While she stresses that she doesn’t mind, it would certainly be understandable if this time comes with heightened tension. Cincinnati marks the last tournament left for Raducanu before she travels to New York to defend her US Open title.

Since returning to North American hard court with a view to the US Open, Raducanu reached the quarterfinals at the Citi Open in Washington and then lost in her opening match at the National Bank Open in Toronto. In both losses to No. 60 Liudmila Samsonova and No. 29 Camila Giorgi, Raducanu was overpowered by two opponents with significantly greater firepower and she struggled to assert herself.

However, all eyes will be on her opponent on Monday night and perhaps the opportunity to swing free in an unlikely, one-off event and against one of the ultimate legends will be liberating.

“Expectations, I don’t really know, I don’t really care. I just want to get out there and firstly enjoy the match that I’m going to play whenever I play it. Playing the best on their way out of the sport is a great gift. I’m just looking forward to that.”