The rulers of the IPO-linked PharmEasy

PharmEasy parent  -I Holdings has submitted a draft of the Red Herring Prospectus (DRHP), which is intended to raise INR 6,250 Cr through the IPO – in a rare step, the entire fundraising process takes place through a new issue

PharmEasy has raised a total of $ 1.6 billion from 43 investors in 14 financing rounds and is currently valued at $ 5.6 billion; Prosus (formerly Naspers) is the largest shareholder in  -I holdings, followed by Temasek and TPG Growth

The Bengaluru-based epharmacy platform PharmEasy, the parent company of PharmEasy, has submitted its draft Red Hering Prospectus (DRHP) for an initial public offering of INR 6,250 Cr. Unlike other IPO-tied companies, the startup will raise the entire offer amount by reissuing shares as its existing investors will not sell any shares.

The Healthtech unicorn, which is currently valued at 5.6 billion ”

PharmEasy was founded in 2015 by Dharmil Sheth and Dr. Dhaval Shah founded and merged with his investment company Ascent Health to form  -I Holdings in 2019. After the merger, Ascent Health founders Siddharth Shah, Hardik Dedhia and Harsh Parekh joined PharmEasy as co-founders. The startup’s ownership structure is dominated by Prosus (formerly Naspers), followed by Temasek, TPG Growth and others.

The acquisitions of  -I Holdings include rival Medlife, the listed diagnostics chain Thyrocare, and the healthcare chain startup Aknamed.

Prosus (formerly Naspers) is the company’s largest shareholder, followed by Temasek, TPG Growth, and others.

PharmEasy claims to connect more than 60,000 stationary pharmacies and more than 4K doctors in more than 16,000 pin codes across India. It also offers SaaS procurement solutions, delivery and logistics support, and loan solutions for pharmacies. The startup claims to have cared for over 20 million patients since its inception.

Here is a look at the Key Managerial Personnel (KMP) that PharmEasy leads when it enters the public market: 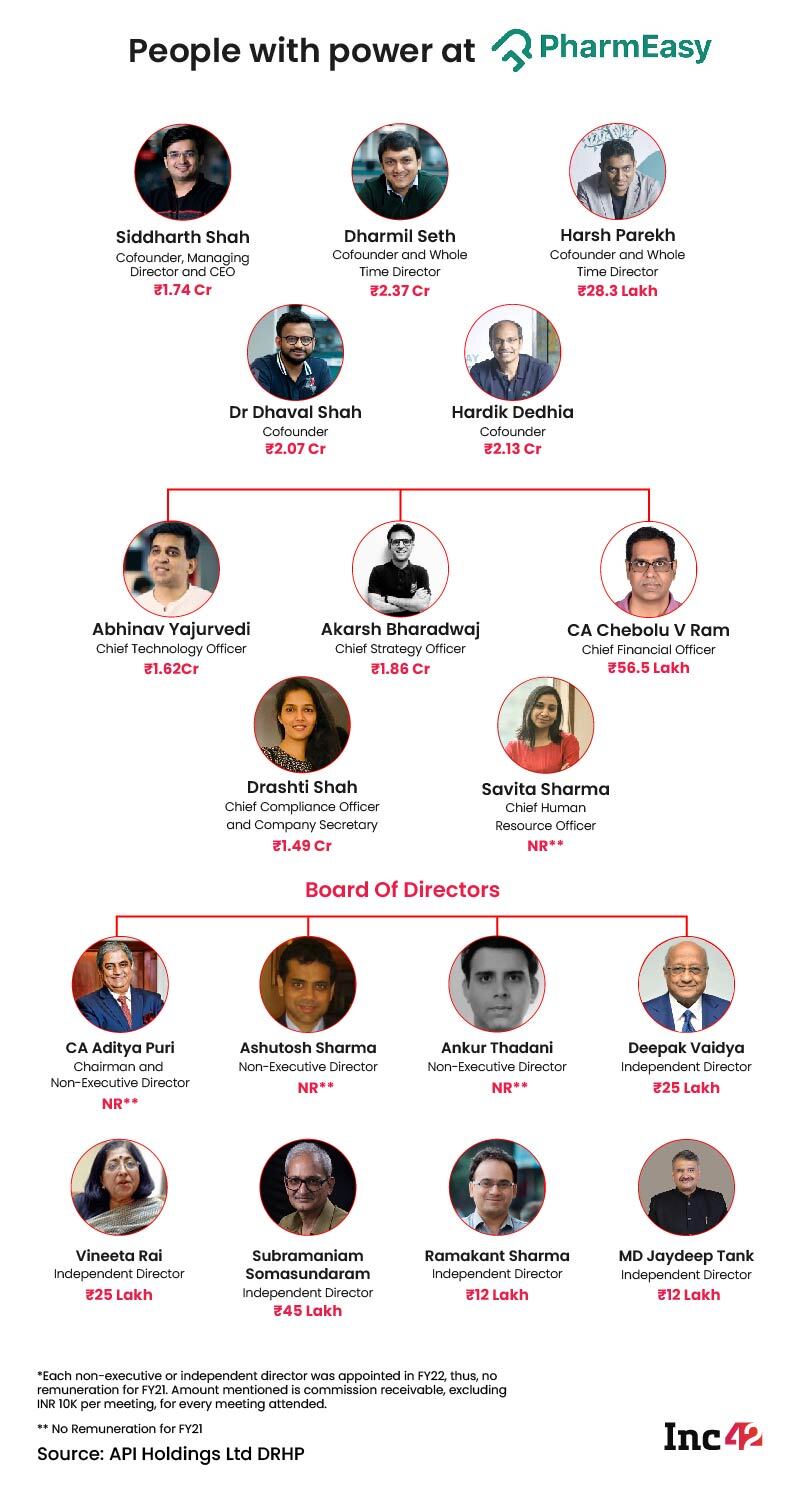 As a managing director, he was associated with Ascent Health and Wellness Solutions Private Limited. After merging with PharmEasy in 2019, he has been a co-founder and director on the board of  -I Holdings since August 27, 2020.

Dharmil Sheth, co-founder and full-time director of PharmEasy, received total compensation of INR 2.37 Cr in FY21. As an electronics engineer for KJ Somaiya, Sheth was previously connected to MakeMyTrip as part of the online product team.

Prior to merging with Ascent Health,  -I Holdings was called 91Streets Media Technologies, of which Sheth was a director and co-founder. He has been a director on the board of  -I Holdings since September 9, 2021.

Harsh Parekh, who also joined PharmEasy from Ascent, holds an MBA from the School of Business Management, NMIMS. He was previously associated with Bharti Airtel Limited and later was COO of Ascent Health.

Parekh received a total of 28.3 lakhs as compensation in FY22.

He has an MBBS from MUHS, Nashik, and a PGDM from XLRI-Jamshedpur. He was a Director of  -I Holdings until September 6, 2021, for which he received compensation of INR 2.07 Cr.

PharmEasy co-founder Hardik Dedhia was Ascent’s Chief Technical Officer until the merger with 91Streets Media. At  -I Holdings, he is responsible for scaling technology innovation and plays a key role in integrating technology teams and solutions across the enterprise.

He is an electronics and telecommunications engineer from the University of Mumbai and has a master’s degree in electrical and computer engineering from Carnegie Mellon University, Pennsylvania. He previously worked as a Quality Assurance Engineer at Net -p.

In FY21 he received compensation of INR 2.13 Cr from Ascent Health.

Abhinav Yajurvedi was  -pointed CTO of  -I Holdings on September 9, 2021. Yajurvedi, an IIT Roorkee alum, was previously associated with Amazon as software development manager and Myntra as SVP engineering.

As part of 91Streets Media and the  -I subsidiary Threpsi Solutions, he received total compensation of INR 1.62 Cr in FY21.

Akarsh Bharadwaj, Chief Strategy Officer of PharmEasy, is a VIT, Tamil Nadu alum who started his career at Nokia Seimens Networks. He was previously affiliated with Dun & Bradstreet and Goldman Sachs.

He has been associated with Ascent and later 91Streets for a little over 5 years. In FY21 he received a total compensation of INR 1.86 Cr from 91Streets Media.

Chebolu V Ram has been the Chief Financial Officer of  -I Holdings since October 12, 2020. As a CA by profession, he has extensive finance, strategy and operations experience in the e-pharma, hospitality, healthcare, ITES, telecommunications, insurance and manufacturing industries.

Previously he was associated with  -ollo Health, Genpact India, Bharti Airtel, Nagarjuna Fertilisers and Impresario. In FY21 he received a remuneration of INR 56.5 lakh.

Savita Sharma came from Mahindra & Mahindra, Patni Computer Systems, Vodafone India, Infoedge India and Bharti Airtel and joined  -I Holdings in October 2021. Therefore, their remuneration was not disclosed in the DRHP.

Pakistani celebrities with their mothers

The best bets, odds and Stanley Cup futures for the second round…

Stablecoin: A cautionary tale of monkeys, cats and chips