Andrew “Andy” Friedenberg seemed destined for a Hollywood-related career from a young age, considering he served on the student council with Robin Williams at a Michigan boys’ school and at Pine Crest School in Florida with Kelsey Grammer Choir sang.

However, after college and the dead end of job hunting in the movie business, he finally took a job as a window tinting contract in San Diego. Before reporting to work, he called United Artists one more time. Bingo, the timing was right.

Friedenberg’s early career as a regional studio publicist for United Artists and later Columbia Pictures spanned the late 1970s and early 1980s. He rode up to 25 film releases a year, organized premieres and accompanied film stars in their media rounds.

Now he’s spilling popcorn in his memoir, Celebrity War Stories: Confessions of a Movie Studio Publicist. (One confession was that he once asked filmmaker (and winery owner) Francis Ford Coppola if he liked wine.)

Andrew Friedenberg, founder of the Cinema Society of San Diego, attends an Academy Awards with his wife, Beth.

But Friedenberg’s forte was staging attention-grabbing film premieres on a tight budget.

For the world premiere of Sam Peckinpah’s “Convoy” with Kris Kristofferson, Ali MacGraw, Burt Young and Ernest Borgnine in Albuquerque, he tried to win over local truckers and shopkeepers. The drivers pulled their articulated lorries, covered with film posters, through the city to the theater, past shops that had a line from the film on their signs: “We have a mighty convoy.”

When MGM’s film “Corvette Summer” premiered in Colorado in 1978, Friedenberg urged drivers at the Denver Corvette Club to circling a portable swimming pool of orange jelly to create a sensation for the first film to headline Mark Hamill after “Star Wars” close.

Sixty Corvette door keys were thrown into the gelatin, then 60 participants were invited to jump in one at a time to get one key. Only one of these keys opened the door to the award-winning Corvette, which the lucky winner was allowed to use for the summer.

Shortly after the Jell-O jump, Friedenberg was lured away by Columbia Pictures. He was assigned the Denver opening of “Blue Lagoon” with Brooke Shields, 16, and Christopher Atkins. He persuaded Continental Airlines to donate a trip to Fiji, where the film was shot, and also created a competition to win a date with Brooke and a date with Chris.

When Brooke asked him to accompany her to the film’s premiere in LA, he agreed, laughing as he imagined the hordes of the press asking themselves, “Who is he?” as they got out of the limo.

After a run of five bosses in four years at Columbia Pictures, Friedenberg decided to become his own boss and returned to San Diego, where his parents lived. But the cinema wheels kept turning.

He joined the Port of San Diego to host a floating Sunset Cinema Film Festival on a roving barge in the 1980s. Screenings, including the film “Jaws,” took place in the ports of Coronado, Chula Vista, Imperial Beach, National City and San Diego. For “Bathing Beauty” he brought in Esther Williams, the film’s co-star. 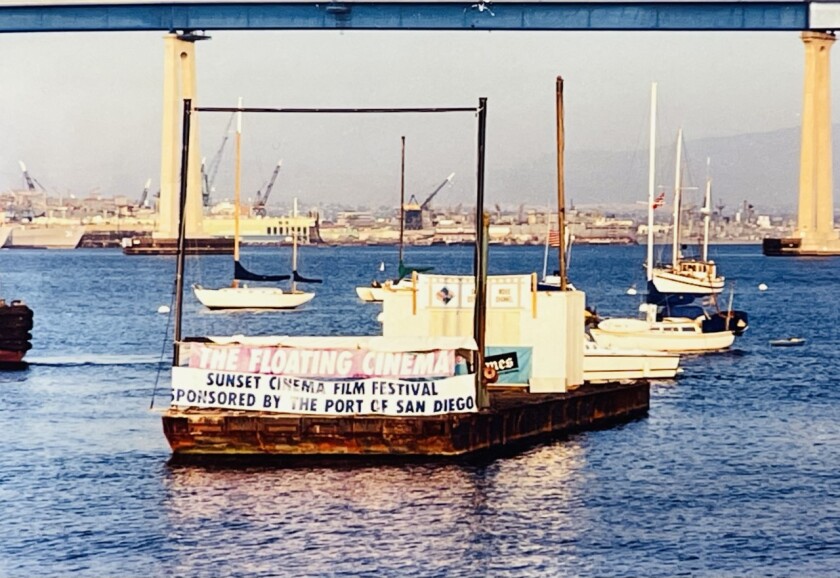 The Port of San Diego once worked with Andrew Friedenberg to show films from a barge offshore in five port cities.

Friedenberg started the San Diego Symphony’s silent film series and hosted the Cinema Summer at the San Diego County Fair. He teamed up with the Prado Restaurant in Balboa Park to show movies over dinner outside in the courtyard. In keeping with his entrepreneurial spirit, participants were invited to bring their pooches to the dog show comedy “Best in Show”.

He shares his passion with local movie buffs through the Cinema Society of San Diego, which he founded 38 years ago and later expanded to Arizona. The company shows films, arranges talks with directors, actors and producers and offers access to special events.

His wife Beth, a travel agent, organizes art trips to various cities with him. Recently, Friedenberg has started sharing his war stories with celebrities on cruise lines.

Nevertheless, he is reluctant when asked about his favorite film. “It’s like asking, ‘Who’s your favorite kid?'” He doesn’t like to pan a movie, although he admits, “Sometimes I have to dig really deep to find out what I love about it.”

At film festivals he comes across some jewels and some films so badly that he shakes his head sadly: “I’ll never get my time back.”

The pandemic has sidelined theater and at times relegated Friedenberg’s cinema company to online meetings. Now that live screenings are back, he’s doing what he does best – advertising. For the recent showing of Peace by Chocolate, a documentary about a Syrian haven who settled in Canada and started a successful candy company, he ordered chocolate for the event.

Gone are the days when movie stars were transported from town to town to watch hype movie releases, but Friedenberg believes that viewers still crave the cinematic experience.

He tested this theory last summer when he rented the outdoor location “Cinema Under the Stars” in Hillcrest. “We were sold out every week on Monday and Tuesday for eight weeks,” he says. “I selected the films and sat back. While everyone was looking at the screen, I was watching them. “

“The tradition of seeing art with strangers – sitting in the dark and experiencing a performance, a play, a concert or a film – will always be with us. People want to get out of the house and they want to share the experience with others. “

Friedenberg has a projection room in his house, but likes to go to the cinema: “You can watch a Padres game on TV, but it’s nothing like going to Petco Park.”

Five Eritrean U20 players are missing in Uganda