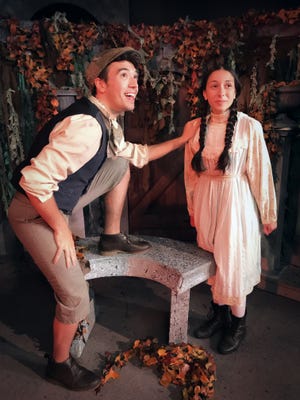 A journey into North Truro’s military past

The theater returns to the Payomet Performing Arts Center in North Truro with “Under the Radar,” a new play by Executive Director Kevin Rice. The historical comedy is a site-specific and audience-interactive piece in which patrons like newly arrived aircraft of the 762.

The dramaturge Dan Lombardo called “Our city meets Dr. Strangelove ”is part of Payomet’s new humanities series“ Remembrances of the North Truro Radar Station, ”which Lombardo is curating based on the military history of the Cape Cod National Seashore. Directed by Daisy Walker, Under the Radar features Robin Bloodworth, Shabazz Green and Paige O’Connor.

The shows run Wednesday through Sunday through September 5 at 10:30 am at Payomet, 29 Old Dewline Road, North Truro. Cards: $ 30; $ 25 for members, with discounts for students, teachers, veterans, and active military personnel. Reservations: https://payomet.org/, 508-487-5400.

Susan Kosoff and Jane Staab, co-founders of the Wheelock Family Theater, will present their musical version of Frances Hodgson Burnett’s classic children’s story “The Secret Garden” as the next show on the open-air stage of the Cape Cod Theater Company / Harwich Junior Theater. The story is about an orphan who moves into her embittered uncle’s house, but uses a garden that has been closed for a long time to restore light and love to the house.

The best of Broadway

The stage stars continue to shine in Provincetown with the next concert and talk shows hosted by Sirius XM radio host Seth Rudetsky, music director of the Broadway @ series produced by Mark Cortale.

The guest on August 20 at Art House (214 Commercial St.) is Susie Mosher, a performer in nightclubs, theaters, television and films who made her Broadway debut as Prudy Pingleton in “Hairspray” for two years. Mosher also had a weekly show at Birdland in New York City.

Broadway @ Town Hall will be back on Aug 22 with Stephanie J. Block, who won a 2019 Tony Award for the title character on “The Cher Show,” and has Broadway credits that include Elphaba in “Wicked,” Liza Minnelli in “The Boy from Oz”, “Falsettos” and “9 to 5”. The Town Hall franchise raises money for Sandy Hook Promise.

The shows follow Provincetown’s mask mandate protocols and proof of COVID-19 vaccination is now required for all shows in both the Art House and City Hall. Tickets and information for both: https://provincetownarthouse.com/.

A journey to love

Cape Rep Theater and its Young Company present the regional premiere of “The Miraculous Journey of Edward Tulane,” the story of a vain porcelain bunny who cares more about his wardrobe than the affection of the little girl who loves him. Going overboard on a trip abroad, Edward embarks on a 20-year journey to learn what it means to love, the pain of losing that love, and the courage it takes to love again.