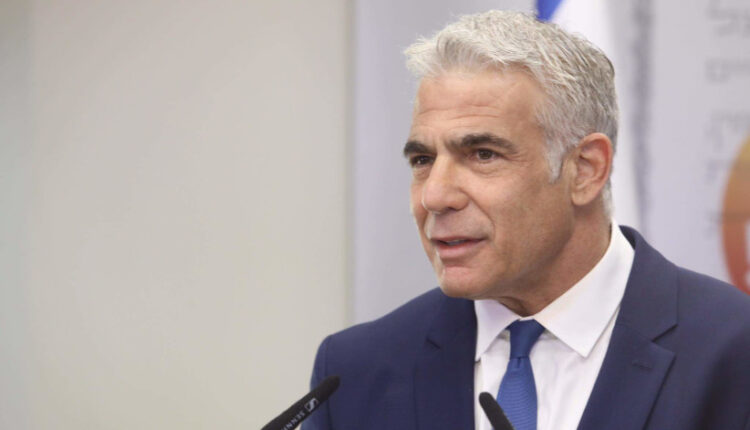 Foreign Minister Yair Lapid set out his detailed plan to defeat Hamas in Gaza through economic and diplomatic means in a speech to the conference of the International Institute for Counter-Terrorism at Reichman University on Sunday.

“We have to start a big, multi-year economic process for security,” said Lapid.

Lapid rejected the dichotomy that Israel can either rethink Gaza or periodically use violence against Hamas and other terrorist groups in the coastal enclave evacuated by Israel in 2005.

“Those are two bad options … this is not a reality that we can accept,” he said.

Instead, Israel should push the phrase “economy for security” without negotiating with Hamas – “Israel does not talk to terrorist organizations that want to destroy us,” Lapid said – to put pressure on the group that controls Gaza.

“We have to say Gazas at every opportunity – Hamas is ruining you,” said Lapid. “Nobody will come and invest real money and nobody will try to build an economy in a place that Hamas fires from and that Israel regularly strikes from.”

An Israeli plan to improve life in Gaza if Hamas lay down its arms is a way to put pressure on Hamas and end the “absurd situation” in which an anti-Semitic terrorist organization is attacking Israeli civilians and is blaming Israel , he said.

This process will take years and is backed by the power of the IDF.

“Our position of strength allows us to initiate rather than sit and wait for the next round,” said Lapid.

The foreign minister also promised that part of Israel’s plan is the return of soldiers and civilians held by Hamas.

This plan has two stages. First, the humanitarian reconstruction of Gaza would be in exchange with an effort coordinated with the international community to stop Hamas’ military build-up.

“The electricity system is being repaired, gas is being connected, a water desalination plant is being built, the health system is being significantly improved and the residential and transport infrastructure is being rebuilt,” said Lapid. “In return, Hamas will commit to long-term calm.”

The international community would need to use its influence to ensure that Hamas stands still and prevents Hamas from self-arming, including preventing smuggling and a supervisory mechanism to prevent humanitarian funds from getting to the terrorist group that Israeli civilians threatened.

Without this oversight, Israel will not allow funds to be invested in Gaza.

During this phase, Israel would retain control of electricity and water in Gaza. Only long-term positive results would lead Gaza to energy independence.

A Palestinian sits near the rubble of a shop that was destroyed in an Israeli air strike in Gaza City last month (MOHAMMED SALEM / REUTERS).

The Palestinian Authority would again be responsible for the crossings into Gaza, with the exception of Rafah, which is controlled by Egypt. Lapid said Egyptian support is critical to the process.

This first stage would have accurate benchmarks within a set time frame. Should Hamas fail to meet these benchmarks, the process would be set back.

“The security formula in the first phase is simple and prime minister [Naftali] Bennett has already sketched it: For rest, we are ready to give more than before. If the calm is broken, Hamas and the other terrorist organizations need to know that the response will be tougher than before, ”said Lapid.

If the first phase is successful, the second phase will enable transformative change in Gaza’s economy, including the construction of an artificial island port off the coast of Gaza and a transport link with the West Bank.

The second stage would promote economic projects with Israel, Egypt and the Palestinian Authority, including industrial zones near the Erez crossing, with international investments from the EU, the US, the IMF, the World Bank and the United Arab Emirates. The Palestinian Authority would be responsible for the civilian administration of the Gaza Strip.

Lapid said his plan would “strengthen the Palestinian Authority … with the aim of achieving a two-state solution”.

“The political conditions – in Israel and in the Palestinian Authority – do not allow diplomatic progress right now, but in Gaza we can and should act now,” he said.

Lapid also said that Bennett and Defense Secretary Benny Gantz “know this position and support the principle behind it” and that he is discussing the plan with leaders in Egypt and the Gulf and with US Secretary of State Antony Blinken, Russian Foreign Minister have Minister Sergei Lavrov and the EU.

When asked whether Bennett, who has always opposed the establishment of a Palestinian state, supports the principles of a plan to strengthen the PA towards a two-state solution, the prime minister’s spokesman said: “Bennett agrees to strengthen the Palestinian population economically. This has been his attitude for years. As Minister of Defense, he authorized the Ministry of Defense, the island idea of [former finance minister] Israel Katz. “

Why is insurance archiving the order of the day?