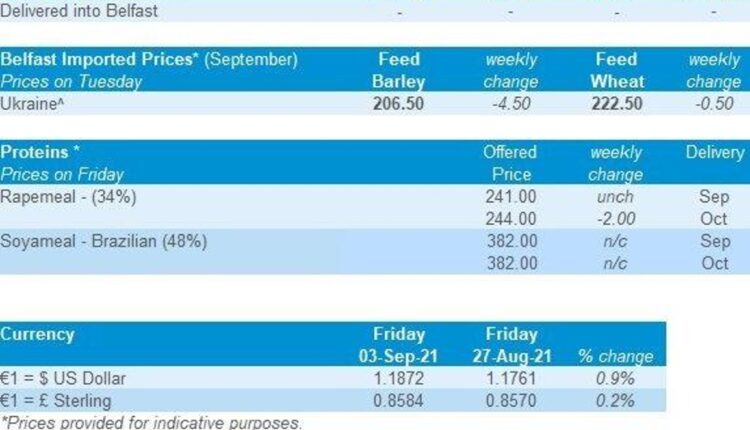 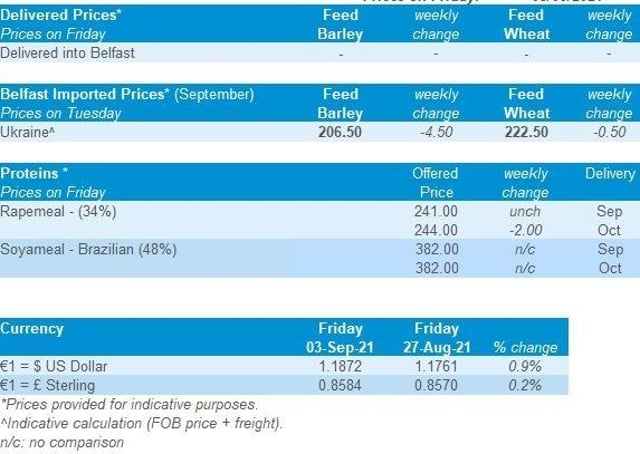 Corn – The US weather looks better, but we can learn more about US yields and acreage in Friday’s USDA report. The chances of a La Niña in 2021/22 across South America remain an ongoing problem.

Barley – The discount to wheat is likely to remain relatively strong this season, with domestic demand also remaining in the foreground. Barley continues to benefit from the scarce global wheat supply.

The prices were taken over by the news of Hurricane Ida, which damaged US grain exporters. Disruptions on the Gulf Coast, which accounts for around 60% of US exports, included power outages, sunken barges and boats in the lower Mississippi, and obstruction to shipping.

However, strong US export sales provided some support on Thursday. In the week ending August 26, net corn sales for 2021/22 were 1.16 million t. Net sales of wheat for 2021/22 were 295.30 kt, an increase of 15% from the previous 4-week average. However, on Friday it became known that China was canceling barley deliveries due to positive news about domestic corn production.

The latest AMIS crop monitoring report was released last week. The United States, parts of northeast China, and southeast Europe have been observation points for corn, although conditions for Chinese corn are generally positive. For wheat, Russian, Canadian and US harvests continue to be highlighted as poor. In contrast, Australia’s harvest appears to be experiencing “favorable to exceptional” conditions.

Russia’s Sovecon cut its wheat forecast last week by 800 Kt to 75.4 million tons. While in Argentina widespread rainfall (30-50mm in key areas) improved the prospects for the wheat harvest in 2021/22. The Argentine wheat harvest, which is to start in November, is forecast by the Bolsa de Cereales at 19.0 million t (+2.0 million t from 2020/21).

Grain will now wait for the price direction of USDA estimates for global supply and demand for agricultural products (WASDE). US corn production is an important observation point for the report. The weather in the Midwest has been favorable lately, although yield estimates vary. The information on the US corn acreage is offered one month earlier than in the previous year due to the availability of data. On the wheat front, changes in Russian production as well as other major exporters will be interesting. The WASDE report is due on Friday.

Rapeseed – The global picture remains tense for rapeseed. Since the start of the season, EU imports have fallen by 29% compared to the previous year. This is because some large exporters choose non-EU destinations, which increases supply shortages.

Soybean – Storm Ida continued to disrupt major US ports and weighed slightly on the market. However, the strong demand helped to moderate the decline. The market is now awaiting the USDA report due this Friday.

Storm Ida weighed on oilseed markets last week as key US export assets stopped working. The Chicago soybean contract on November 21 closed at $ 474.68 / t on Friday, down $ 11.48 / t (Friday-Friday). In the middle of the week, the contract closed at its lowest level since June 25, 2021 after persistent disruption. A slight increase towards the end of the week was led by traders covering their short positions ahead of the long US weekend.

Despite the disruptions, export demand for US soybeans is strong, especially to China. The USDA reported weekly export sales of soybeans totaling 2.13 million tonnes for the 2021/22 marketing year through the week ending August 26, 2021. This is 21% more than in the same week last year and 22% compared to the previous week. The trade expectations ranged from 0.73-1.40 million t, which was clearly exceeded. This helped relieve the pressure of Storm Ida.

Trading awaits this month’s USDA Global Supply and Demand Estimates (WASDE) report to be released on Friday. This includes updating the US soybean acreage a month earlier than usual.

South American soybean supply is also being called into question as Brazilian farmers are described as “hoards” of their crops, apparently on the assumption that prices will rise. Added to this is the fear of a second La Niña, which would have a negative impact on the coming season.

Argentine soybean sales also lagged a year earlier. The 2020/21 harvest (harvest in June) is smaller than last year and sales reflect this. At 28.5 million t, sales are around 1.8 million t below the previous year’s period.

The EU consultancy Stratégie Grains put its EU rapeseed production estimate for 2021 at 16.9 million on Friday, which remains above 2020 production.

Similar to the European futures markets, UK physical prices (delivered to Erith, November 21st) remained unchanged weekly at £ 504.50 / t. The rapeseed harvest is largely ending in the UK, resulting in slow physical trade. The sowing of the 2022 harvest is in full swing, and many rapeseed plants are breaking through the surface. The moisture content was good, so the 2022 crop should have a good start to the growing season.

9/11: How America’s withdrawal from Afghanistan is affecting Australia’s economy

Early punishment is not enough to stop Truex