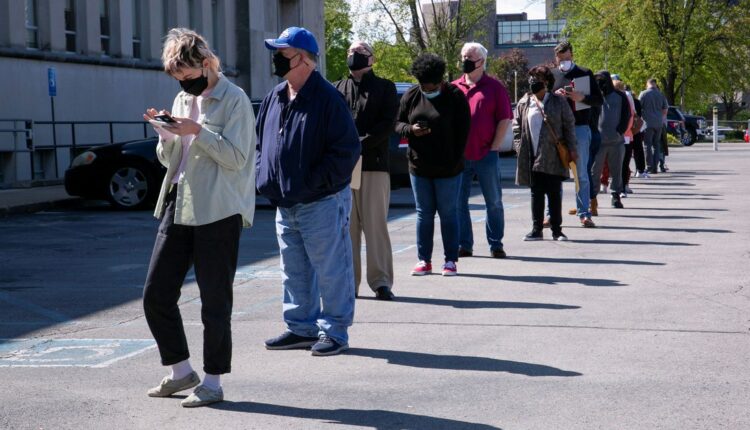 WASHINGTON, Nov. 24 (Reuters) – The number of Americans filing new unemployment benefits fell last week to its lowest level since 1969, indicating continued strength for the economy in a year of bottlenecks and an endless pandemic.

The slump in claims reported by the Labor Department on Wednesday has been exaggerated by the model the government uses to filter seasonal fluctuations out of the data. Still, the labor market recovery is picking up pace, with the number of unemployed reaching its lowest level since mid-March 2020 when the economy was hit by the first wave of COVID-19 infections.

“There may be some seasonal adjustment problems, but the handwriting is on the wall and all the anecdotal reports that companies cannot find the help they need are true,” said Christopher Rupkey, chief economist at FWDBONDS in New York. “The economy will end the year with a bang.”

Initial claims for state unemployment benefits fell by 71,000 in the week of November 20 to a seasonally adjusted 199,000, the lowest level since mid-November 1969.

Economists polled by Reuters had forecast 260,000 applications for the past week. The decline pushed applications below their pre-pandemic average of around 220,000.

Unadjusted claims rose 18,187 last week to 258,622 amid a surge in Virginia that offset declines in California, Kentucky and Missouri.

The report was released early on Thursday due to the Thanksgiving holiday. The data could get noisy during the holiday season. Applications have fallen from a record high of 6.149 million in early April 2020 and are now in a range consistent with a healthy labor market, despite an acute labor shortage caused by the pandemic is hampering faster job growth.

However, there is hope of increasing the workforce. The number of people who continued to receive benefits after a first week of assistance fell by 60,000 to 2.049 million in the week ending November 13, the claims report showed. That was the lowest level since mid-March 2020.

Employment growth averaged 582,000 jobs per month this year. At the end of September there were 10.4 million vacancies. The workforce has decreased by 3 million people from pre-pandemic levels, despite generous federal government-funded benefits being phased out, schools reopened for face-to-face learning, and companies raising wages.

The decline in claims is in line with retail sales and manufacturing output data, which suggests the economy will regain momentum in the fourth quarter after accelerating in July-September than the summer coronavirus -Cases flared up and bottlenecks widened.

A separate report by the Commerce Department on Wednesday confirmed the sharp slowdown in growth in the third quarter. The gross domestic product rose by 2.1% projected over the year, according to the government in its second estimate of GDP growth for the period. This was still the slowest rate of growth in more than a year, but has been revised up slightly from the 2.0% expansion rate reported in October.

Economists had expected GDP growth to rise to 2.2% in the third quarter. The economy grew 6.7% in the second quarter. The slight upward revision reflected a more moderate pace of destocking than originally anticipated, which offset a significant reduction in consumer spending.

But that’s all in the rearview mirror. A third report from the Commerce Department showed that orders for non-defense capital goods excluding airplanes, a closely watched proxy for business spending plans, rose 0.6% last month. Economists had forecast an increase in incoming orders for core capital goods by 0.5%.

Part of the increase last month was likely due to higher prices due to global shortages. Equipment spending declined in the third quarter after four consecutive quarters of double-digit growth. Continue reading

It was weighed down by a shortage of motor vehicles. A global shortage of semiconductors is undermining automobile production. Consumer spending also appears to have picked up again in October, with retail sales rising last month as Americans went early on their Christmas shopping to avoid bottlenecks and pay even more for scarce supplies.