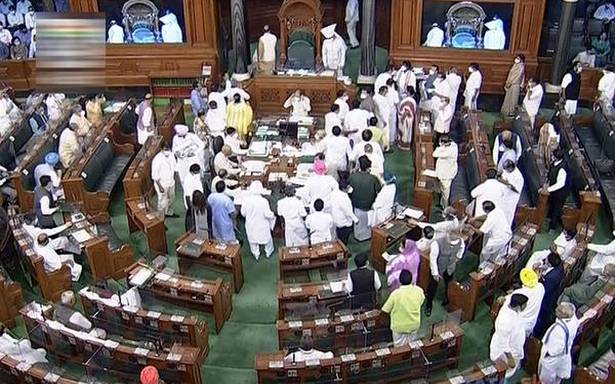 The return to the demarcation of the 19th century called for by Mizoram. In clashes between the police forces of the two states, which resulted from the dispute on July 26, six police officers and one bystander were killed.

On August 9, militants shot dead a BJP Sarpanch and his wife in the Anantnag district of Jammu and Kashmir, police said.

The earth’s climate is getting so hot that in about a decade, temperatures will likely exceed warming levels that world leaders have been trying to prevent, according to an August 9 unified report released by the United Nations Calling the “red code for humanity”.

On Monday, parliament passed the law amending the central universities (Amendment) 2021, which aims to establish a central university in the Union territory of Ladakh. Rajya Sabha passed the bill with one vote, while opposition parties like Congress, TMC and DMK stood still.

Last week, Facebook Inc. announced that it had banned accounts and access from researchers on New York University’s Ad Observatory project, stating that their research practices violated the company’s terms of service. Critics cited the move as an attempt by Facebook to silence organizations that question their targeted advertising practices, particularly those related to political ads.

Tamil Nadu’s budgetary position is in an “unsustainable” position and the state’s income deficit since 2013-14 “has become really alarming,” said Tamil Nadu Finance Minister Palanivel Thiaga Rajan. The finance minister said deep structural reforms were needed and a business-as-usual approach could not continue.

With the long-speculated change in leadership, the ruling Bharatiya Janata Party (BJP) is poised to reorganize its party organization in Karnataka in preparation for the 2023 assembly elections, sources say. The president of the state unit is likely to be changed and many high-ranking leaders who have either been sacked from cabinet or failed the cut will be drafted into party work, a senior party official said.

The program is open to anyone who studied English and math in Grade 10 and completed Grade 12. There is no geographic barrier. Candidates with academic backgrounds and different professions can apply for the program, which starts in September.

The center has promised to increase the allocation of COVID-19 vaccine doses in Karnataka from about 65 lakh to 1 crore per month. Minister Basavaraj Bommai briefed reporters in Mysuru after a COVID-19 review meeting, saying Karnataka is currently receiving an average of 65 lakh cans every month. When he met the Union Health Minister during his visit to Delhi and requested an increase in funds, he was assured that Karnataka would receive one billion doses from August.

The Supreme Court gave the government two weeks on Monday to produce a report detailing the steps it has taken to comply with the recommendations of the court-appointed National Task Force (NTF) to improve, secure and streamline manufacturing, Allocation and delivery of medical oxygen to states and Union territories in the fight against the COVID-19 pandemic.

‘South Park’ Usually Bashes Celebrities, But They Helped This Singer By Putting Her In the Show

Opinion | Democrats cannot neglect either democracy or the economy