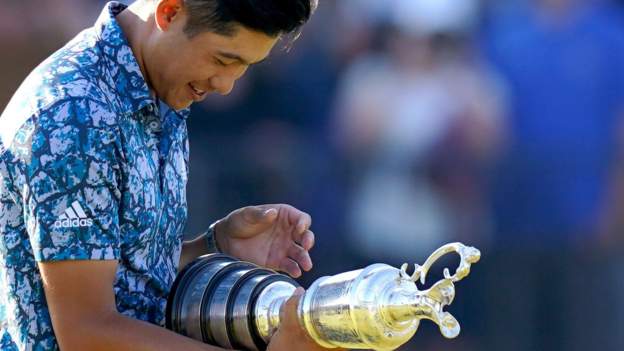 Nerveless Collin Morikawa shot a dazzling, bogey-free finals to pick up the Claret Jug on his Open Championship debut while returning fans soak up the win at sun-drenched Royal St George’s.

The American battled for the lead with three birdies to finish the top nine and held off attacking Jordan Spieth to win with two strokes on the Kent coast.

The 24-year-old, who won his first major on his debut in the US PGA Championship last year, is the first Open debutant to win the course since Ben Curtis 2003.

Morikawa’s four-under-66 took him to the win at 15 under, with 2017 champion Spieth also taking 66 on the final day to end up as his compatriot’s next challenger.

US Open Champion Jon Rahm birdieed four of his last six holes to score a 66 and finished third with 11 under with overnight leader Louis Oosthuizen who finished with a 71.

Up to 32,000 spectators streamed through the gates on Sunday and saw a blockbuster final as the only player to make the cut among the top four in Sandwich in all four of this year’s men’s majors.

It was a fitting final at Royal St George’s when the venue was belatedly able to host the 149th edition of the oldest major in golf after the championship was canceled last year due to the Covid pandemic.

Shane Lowry’s win at Royal Portrush two years ago felt like it came from a different era when the sport was banned and although six majors have played in the US since then, this was the first to be played on this side of the world has been Atlantic since the Irishman’s legendary victory in 2019.

Pre-tournament rain compacted the rough, making for receptive fairways and forgiving greens, but that meant that once the wind eased, players could score low on Friday before organizers responded with tricky pin positions for the weekend.

However, it was Oosthuizen who held the lead in one fell swoop before the last lap on Sunday, aiming for a one-two and winning his second Open title.

Morikawa admitted he had little experience in links golf – and his worst result as a professional was when he finished 71st at the Scottish Open last week.

In the midst of the scorching heat on Sunday, the fourth in the world rankings also showed that he has the temperament to further improve his big record.

With three consecutive birdies for Morikawa, he suddenly took the four-stroke lead as he hit the turn while Oosthuizen stuttered next to him on the final pairing.

But the first flicker of the American’s emotions came in 10th place as he made a great up and down from the back of the green to save the par and pump his fist to celebrate.

At this point the Spieth attack was alive, but Morikawa made 14 birdies to keep his compatriot at bay, and with the roar further up, rescued par at 15 again.

From then on it was a matter of keeping your nerve as the anticipation grew among the excited fans, but that was no problem for Morikawa, who took the lead with two strokes for the last time and with great applause on 18th the first man, who won his Open debut for 18 years.

He made two putti for a final par to ensure victory, then waved and clapped the fans who had appropriately composed the 18th grandstand.

“I tell everyone that I’m not the greatest historian, but I want to put myself in the story and make memories,” said Morikawa, admitting that he will have “a few drinks” from the Claret Jug.

“Everything about this week was very special to make it even more special for my caddie’s birthday.

“Since turning pro I’ve believed in myself that I can do it. When it comes to these tournaments, courses and styles that I’ve never played before, I do my homework Monday through Wednesday to know what I have to do.”

The South African fell asleep as The Open Leader for the first three nights of the championship, but the wait to realize his dream of adding another Claret Jug to the one he won at St Andrews in 2010 continues

He’d only done three bogeys in the entire tournament before his final round, but on Sunday he carded as many as the excitement showed.

Oosthuizen’s luck almost changed when his tee shot hit the pin on the 11th par-three and his ball almost fell for a hole-in-one instead of a birdie.

But the 38-year-old has finished second six times in major championships, and when he defended 13th there was a knowing look of resignation.

He took a stroke back on the following hole, but at that point Morikawa was in full control and Oosthuizen carded his only round over par of the week, finishing four back.