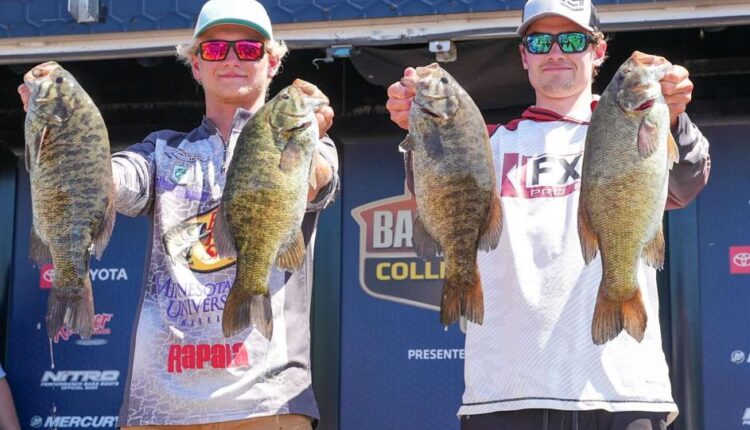 MANKATO – A Minnesota State University fishing duo hope a strong performance at the National College Bass Fishing Championship in New York will help them grow the sport at home.

It is the third time MSU seniors Brian Linder and Nathan Thompson have qualified for the Carhartt Bassmaster College National Championship, which began Thursday and will last through Saturday. They ranked eighth out of hundreds of teams from around the country in Florida last year.

Linder and Thompson’s goal for this year’s competition was to improve their placement over the past year. They launched their boat on the St. Lawrence River for the first day on Thursday and could continue to compete through Saturday if their catches weigh enough in two days to make it into the top 12.

Since the two see themselves as ambassadors for the sport in Minnesota, doing well could help them achieve a longer-term goal as well.

“Our main goal is to grow the team down there,” said Linder. “Now that Nathan and I got our names in Minnesota, let’s ride that wave and make a good team in Minnesota.”

They will renew their efforts this year. The sport has untapped potential in Minnesota, Linder said.

When they competed in the state championship as an Eagan high schooler in 2016, he recalls that there were about 90 teams. More recently, the number was closer to 500.

College students who love to fish don’t have to give up while on campus, he added.

Linder’s father Michael acts as a team coach. He said his son and Thompson began fishing as children by cycling to a nearby lake and casting off from the shore.

Over the years of competing in high school and college, they have learned how to examine different bodies of water to find the best fishing spots. As a coach and father, Michael Linder said it was one of the greatest joys to see their enthusiasm and passion for the sport.

“These two spend their time researching what the best anglers do to be successful,” he said.

And they’re not just competing for themselves. They want to leave a legacy that other young anglers can carry on, the trainer said.

“They want an opportunity for kids in Minnesota or Iowa to catch this outdoor bass fishing,” he said. “They want a place for them to do this, and they hope to get known at the national tournament.”

The teammates and their 120 competitors from other colleges and universities had two days of training on the St. Lawrence River before the competition began on Thursday. Given the size of the competition area, it was an intense process.

“It’s a huge body of water,” said Brian Linder. “We can fish from Waddington, New York, to the mouth of Lake Ontario, which is more than 90 miles long.”

The night before the competition began, he and Thompson said they felt they had found some promising fishing spots. Growing up fishing in Minnesota gave them confidence.

“There are a lot of good teams here,” said Brian Linder. “But I’d say that me and Nathan, who grew up in Minnesota and have been fishing for perch in clear lakes our entire lives, give each other a pretty good edge.”

The consistently high placings in the college circuit in recent years make it likely that next year they will be able to win places in the Nationals again for the fourth time in the Regionals. But first they are aiming for a good finish this weekend in New York, knowing what it could mean for building a team in Mankato.

“When all is said and done, hopefully we’ll bring a trophy back to Minnesota,” said Brian Linder.