The economy that Covid-19 couldn’t stop 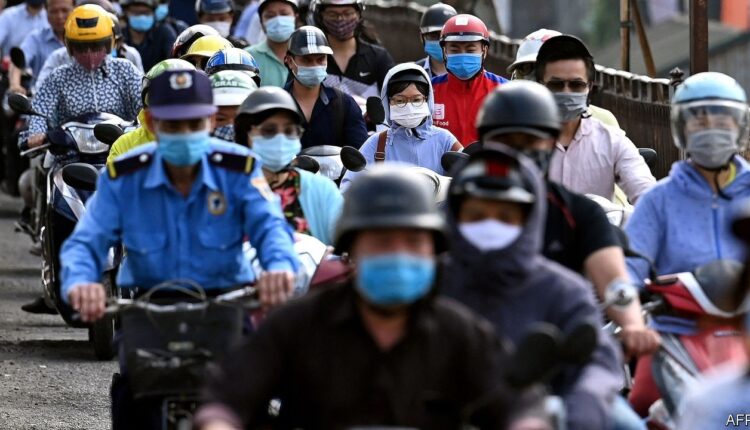 After impressing the world by taming the virus last year, Vietnam is now in the midst of its by far worst Covid-19 outbreak. Parts of the country are tightly locked and a number of factories, from those making shoes for Nike to those making smartphones for Samsung, have either slowed down or closed, disrupting global supply chains. However, integration with global manufacturing helped keep the Vietnamese economy going during the pandemic. In 2020, GDP rose 2.9%, although most countries experienced deep recessions. Despite the recent outbreak, growth could be faster this year: the latest World Bank forecasts, released on Aug. 24, expect an increase of 4.8% in 2021.

This performance points to the real reason to be impressed with Vietnam. Its openness to trade and investment has made it an important link in supply chains. And that, in turn, has resulted in a remarkable and protracted expansion. Vietnam has been one of the five fastest growing countries in the world for the past 30 years and has beaten its neighbors by far (see Figure 1). Its balance sheet is not marked by the beginnings of many other frontier markets, but by steady growth. The government is even more ambitious and wants Vietnam to become a high income country by 2045, a task that will require 7% growth per year. What is Vietnam’s secret of success – and can it be sustained?

Vietnam is often compared to China in the 1990s or early 2000s, and for good reason. Both are communist countries that, led by a one-party political system, became capitalist and focused on export-oriented growth. But there are also big differences. First of all, even describing the Vietnamese economy as export-intensive does not do justice to its sales abroad. Trade in goods exceeds 200% of GDP. Few of the world’s economies, with the exception of the most resource-rich countries or city-states dominated by maritime trade, are or have ever been so trade-intensive.

It is not only the level of exports but also the nature of the exporters that sets Vietnam apart from China. In fact, it makes it seem more like Singapore due to its deep connection to global supply chains and high levels of foreign investment. Since 1990, Vietnam has received an average of 6% of GDP a year in FDI, more than twice the amount worldwide – far more than China or South Korea have ever recorded over a long period of time.

But the growing divide between foreign and domestic firms now poses a threat to Vietnam’s expansion. It has become overwhelmingly dependent on investment and exports from foreign firms, while domestic firms have underperformed.

Foreign firms can continue to grow and create more employment and production. But there are limits to how far you can take Vietnam’s development. The country needs a productive and efficient service sector. As the standard of living rises, it may become less attractive to foreign manufacturers over time and workers will need other options. 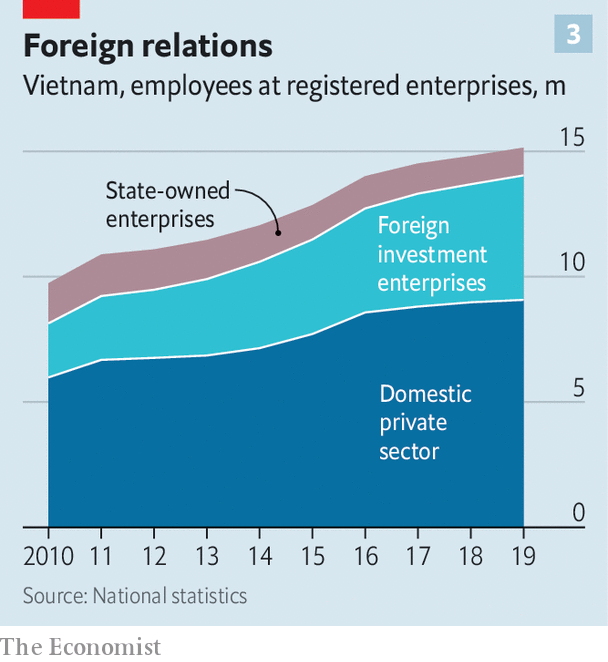 Part of the burden on domestic companies comes from state-owned companies. Their importance for the country’s activity and employment has diminished (see Figure 3). Nonetheless, their privileged position in the banking system, which enables them to obtain cheap credit, has an overwhelming effect on the economy. Banks offset this unproductive lending by charging other domestic firms higher interest rates. While foreign companies can easily access financing abroad, the average interest rate on a medium- and long-term bank loan in Vietnamese dong was 10.25% last year. Recent research by scholars at the London School of Economics also suggests that productivity gains would have been 40% higher in the five years since Vietnam joined the WTO in 2007 had it not been for state-owned companies.

To boost the private sector, the government wants to promote the equivalent of South Korea’s chaebol or Japan’s keiretsu, sprawling corporations operating in a variety of sectors. The government “is trying to create national champions,” says Le Hong Hiep, senior fellow at the ISEAS Yusof Ishak Institute in Singapore and a former Vietnamese official.

Vingroup, a dominant conglomerate, is the most obvious candidate. In VinPearl, VinSchool and VinMec it has activities that span tourism, education and health. VinHomes, its real estate division, is Vietnam’s largest publicly traded private company by market capitalization.

The group’s efforts to get into finished car production through VinFast, its automaker, could be most important to the economic development of a country normally known for producing intermediate products. In July, the company’s Fadil car, based on the design of the Opel brand Karl, became the best-selling model in Vietnam, beating Toyota. VinFast also has great ambitions abroad. In July, it announced it had opened offices in America and Europe and intends to sell electric vehicles there by March 2022.

However, it is not easy to promote national champions while remaining open to foreign investment. VinFast benefits from a number of tax breaks, including a large corporate tax cut for the first 15 years of operation. In August, local state media also reported that the government is considering cutting registration fees again by 50% on locally built cars that phased out last year.

However, the country’s membership in the Comprehensive and Progressive Agreement for the Trans-Pacific Partnership and a number of other trade and investment agreements means that it cannot give preferential treatment to domestic producers. It must also support foreign companies that manufacture cars in Vietnam. (In contrast, China’s trade policy, which favors broad but shallow deals, does not restrict domestic policy in quite the same way.)

Vietnam may also be hoping for another source of growth. The economic boom has encouraged its enormous diaspora to invest or even return home. “There aren’t many economies that experience something like Vietnam,” says Andy Ho of VinaCapital, an investment firm with assets of $ 3.7 billion. In 1977 his family moved to America, where he trained and worked in consulting and finance. In 2004 he returned to Vietnam with his own family. “If I were Korean, I might have returned to the 1980s, if I were Chinese, I might have returned in 2000.” Its successful diaspora makes Vietnam one of the largest recipients of remittances in the world; Last year, $ 17 billion flowed, which is 6% of GDP.

The Covid-19 backlash aside, it may seem hard not to be bright about a country that appears to be in the early stages of emulating an East Asian economic miracle. But no country got rich through remittances alone. With the development of Vietnam, it is becoming more and more difficult to maintain its rapid growth by exporting foreign companies, and the tension between being open to foreign investment and promoting national champions is growing. All of this makes domestic private sector and financial system reform of paramount importance. Without them, the government’s lofty goal of getting rich quick may prove unattainable.