Taliban victory brings economy to the brink of collapse 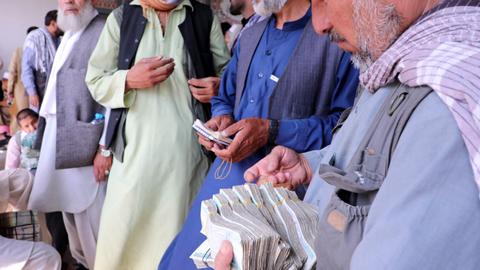 With the currency falling and inflation rising, the economic hardship turns out to be the greatest challenge for the Taliban’s rule.

Afghanistan’s economy is about to collapse. On the streets of Kabul, residents stand in front of banks for hours every day. The prices of everyday necessities have skyrocketed, salaries have been suspended and companies are at a loss.

The country’s cash-based economy was fragile and heavily dependent on aid even before the Taliban takeover, but with foreign aid stopped and assets frozen – since the group’s sudden seizure on Jan.

Malak Zafar, a taxi driver, is becoming more and more desperate as, like many other Afghans, he is finding it difficult to make ends meet.

The 40-year-old father of eight says most of the money he makes now is being spent on fuel.

A 50-kg sack of flour was sold for 2,200 Afghans in Kabul, around 30 percent more than before the fall of the city.

Zafar said people no longer had jobs or schools, which added to the misery.

“I usually pick up people who used to go to work in the morning and take them to town, to the office or to school, but these days I can hardly find anyone who wants a taxi.”

Since the Taliban came to power in August, the Afghani currency has fallen by almost 8 percent against the US dollar.

The Taliban have no access to around $ 9 billion in foreign exchange reserves. Important donor countries such as the USA and Germany, including the International Monetary Fund and the World Bank, have also stopped financing Afghanistan.

Fitch Solutions said in a report last week that the country’s real gross domestic product (GDP) will shrink 9.7 percent this fiscal year. In the next year there will be a further decrease of 5.2 percent.

Afghanistan experiences the mother of all “sudden stops”

that is, economic collapse due to a sudden stop of foreign money funding a large trade deficit

Afghanistan financed a trade deficit of ~ 25% of GDP

Analysts and aid agencies say the country’s financial collapse could have serious effects on the Afghan economy.

“As a result of the takeover, critical macroeconomic functions of state institutions such as the central bank and others have come to a complete standstill. In retrospect, this has had a serious snowballing effect on the Afghan economy – so the challenges will increase. “With every day that goes by,” Muhammad Sulaiman Bin Shah, the former Deputy Minister for Industry and Trade, told TRT World.

Sulaiman explains that the country’s banking sector is facing several challenges, including cash scarcity and the latest Taliban policy that has limited cash withdrawals against each account holder to $ 200 per week.

“Food security will continue to be a major challenge in the coming weeks and months,” he warned.

Economic challenges for the Taliban

Growing economic hardship is proving to be the main challenge facing the Taliban as the daily struggle of Afghans to get food on the table has become an overwhelming process.

Shaheen said the Taliban had given the UN delegation a pledge to “work together and provide the necessary facilities”.

UN Secretary General Antonio Guterres asked earlier this month that the countries of Afghanistan must provide emergency funds, as a “humanitarian catastrophe” looms after the withdrawal of foreign troops on August 31.

“With the meager money I’m making now, we can barely survive. I can’t feed my family and sometimes we go to sleep hungry,” Nasir Khogyaniwal, a construction worker, told TRT World.

“All construction work has ceased since the Taliban took power. There are days when I don’t even make money. I’ve even tried to ask people if they have work for me at home, but to no avail.”

Last week Afghans were seen in Kabul selling their meager possessions such as pots, plates, old carpets, furniture, televisions and refrigerators to make some money.

The Taliban have not yet announced their new government, but the United Nations has resumed humanitarian aid flights to parts of Afghanistan, and Qatar is helping the Taliban reopen Kabul airport.

The money transfer services Western Union and MoneyGram have also reopened in the country.

Last week, Haji Mohammad Idris, a Taliban loyalist who had no formal financial education or college education, was appointed head of the central bank.

“To successfully restart the economy, the Taliban must protect current investments in the country, including mega-energy projects and facilities,” said Sulaiman.

“In this context, critical attention is needed in the formulation of guidelines. Any change without taking into account the industrial dynamics and business environment in Afghanistan can create serious problems.”

With the economy at a standstill, the country is threatened with emigration. Crowds of people rushed to the airport to escape Taliban rule.

But the US-led air evacuation operation has ended with the evacuation of more than 123,000 civilians by US forces and their coalition partners. It is unclear how many of them were Afghan nationals.

CONTINUE READING: NATO is continuing its efforts to obtain further evacuations from Afghanistan

The US claims to have evacuated almost 80,000 civilians from the capital, Kabul, including around 5,500 Americans and more than 73,500 Afghans and other foreigners.

The UK Defense Department said it flown out more than 15,000 people, including around 8,000 Afghans.

“The closure of start-ups affects innovative micro, small and medium-sized enterprises (MSMEs) the most. Thousands of young Afghan men and women have left the country with reluctant courage and heavy breasts.

“But (now) it is the thousands of self-made and resilient Afghans who will go through long painful days and nights,” said former Deputy Minister Muhammad Sulaiman Bin Shah.

Many of the evacuees were qualified professionals, from civil servants to doctors and lawyers to bankers and journalists.

This underscores the end of any hopes they might have had to help shape the country’s future.