Austria, like Germany, has a deftness for creating highly specialised companies — often less well-known “hidden champions” — that are also global leaders in their field, according to the agency charged with promoting investment in the country.

The Austrian Business Agency (ABA) paints a shining picture of the local start-up scene in which new businesses, incubators, accelerators, co-working spaces and new venture capital funds have emerged over recent years, attracting capital from outside.

“In 2019, start-ups attracted €218m in investment. Especially, scale-ups have been successful in attracting funding internationally,” the ABA says.

But the rate at which start-ups are created in Austria remains lower than that in comparable European countries, and a new law aimed at controlling foreign direct investment from non-EU countries, coupled with existing red tape, has prompted concerns that innovation is being stifled.

Start-ups are clustered at various points across the country, often led by universities. There are green tech and “medtech” hubs in the southern state of Styria, Innsbruck focuses on quantum computing and alpine tech (centred on mountain and sports tourism), while Linz is home to many IT companies. More than 50 per cent of start-ups are located in the capital, Vienna.

Yet, while the government promises to simplify the founding process, company formation is still considered bureaucratic and expensive compared with the UK, Singapore or Estonia, for example. It takes an average 21 days to register a business in Austria compared with 4.5 days in the UK, according to the World Bank’s Doing Business report.

Once set up, however, companies can access early-stage capital relatively easily. Founders can apply for subsidies and grants from government agencies, as well as angel investors and incubators.

But this is not necessarily good for the innovation ecosystem, argues Dejan Jovicevic, chief executive of the Austrian start-up magazine Der Brutkasten.

The abundance of early-stage capital is “helpful to get off the ground, but may also lead to founders being more comfortable” in their journey, potentially “slowing down their drive”, he says.

Austria’s most noteworthy exits include Runtastic, a fitness training app that was sold to Adidas for $239m in August 2015. In the pharmaceutical sector, Roche acquired diabetes management platform MySugr in June 2017.

Digital bank N26 is only a partial Austrian success story: its Austrian founders moved the company from Vienna to Berlin shortly after establishing it. Now, as Germany’s most valuable fintech start-up, it has recently opened an office in Vienna.

Hansi Hansmann, a prominent Austrian business angel investor writing in Der Brutkasten this year, gave a damning verdict of Austria’s start-up ecosystem, adding that the innovation race was being lost not only to the US and China but also European competitors.

So when the Austrian government announced a new law in May controlling FDI from non-EU countries in order to restrict the transfer of technology overseas, Mr Hansmann, who holds investments in about 40 start-ups in Austria, commented: “You can’t actually be that stupid. We have had the problem of securing follow-up financing for many years and this will be made even more difficult.”

Investments from outside the bloc will be subject to an approval process that could take months. Start-ups with fewer than 10 employees and annual turnover of less than €2m will be exempted, but many VCs and founders argue this is insufficient and could deprive companies of vital foreign capital for later-stage growth.

Successful Austrian start-ups such as N26 or Kompany, a regulatory technology platform, looked to Asia and the US for follow-up financing. According to VC firm Atomico’s 2019 State of European Tech report, nine out of 10 financing rounds over $100m included at least one US or Chinese investor.

Rudolf Kinsky, president of the Austrian Private Equity and Venture Capital Organisation (AVCO), says: “We rarely have national financing rounds beyond €2m-€3m. Austria needs capital from outside the EU for growth and exits.” 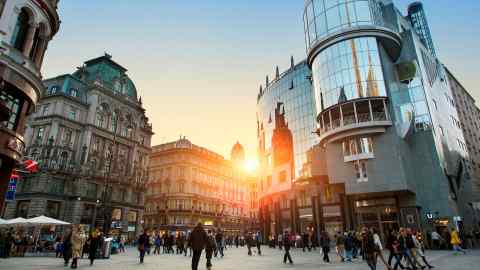 Not everyone believes the new law will starve Austrian companies of investment, however.

“There is money in Austria’s foundations and pension funds which could be activated to finance start-ups,” says Laura Egg, managing director at Austrian Angel Investors Association. Nonetheless, she reckons it would “take years” to build up this new form of financing.

While the law could help to keep innovation at home, she adds, its introduction is poorly timed. “We should have controlled FDI earlier. To do so now, during the Covid crisis, does not help struggling start-ups.”