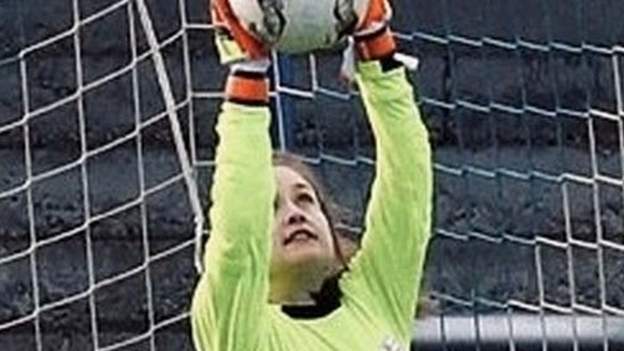 Goodwin was abused as a youth player and developed an eating disorder during her senior career.

And the ex-Montrose keeper believes that more needs to be done to distance the players’ talent and body image.

“People think it is acceptable to make comments about the bodies of female athletes in ways that they would never make to a man,” Goodwin told Good Morning Scotland.

“When a male footballer misses a penalty or a shot or whatever, it is his ability, not his physical appearance, that is being criticized.

“It’s about changing the way we talk about women’s bodies; not talking about them in a certain way, so that we don’t reinforce unattainable standards or constructs of what a woman’s body should or shouldn’t look like. “

“I was made to feel like I wasn’t good enough”

Goodwin stated on BBC Radio Scotland that at the height of her illness she was “unable to walk from room to room, let alone get onto the field of my house”.

“The first time I saw the negative side of the game was when I actually moved to my club and started playing at the U13 level,” she said.

“Boys from my school used to come to my games and sing me out and stand behind my goal and call me fat and a pig because I was a slightly older kid on the team. Those comments stick with you from such a young age.

“I had the feeling that I wasn’t good enough for the sport because of my looks. Unfortunately, that had serious consequences for me.”

And Goodwin, now a journalist for the Press & Journal, added: “When I switched to senior women’s football – it’s a faster game than juniors – I tried to get a little fitter and unfortunately I developed an eating disorder and” really pushed my body to the edge, where it could no longer cope and no longer play football.

“My advice to coaches and football players, be they parents or outside parties, would be to be aware of the way they talk about women’s bodies, because for me it was throwing away comments about how I looked that made me so sick .

“People need to understand that fitness doesn’t mean being thin.”