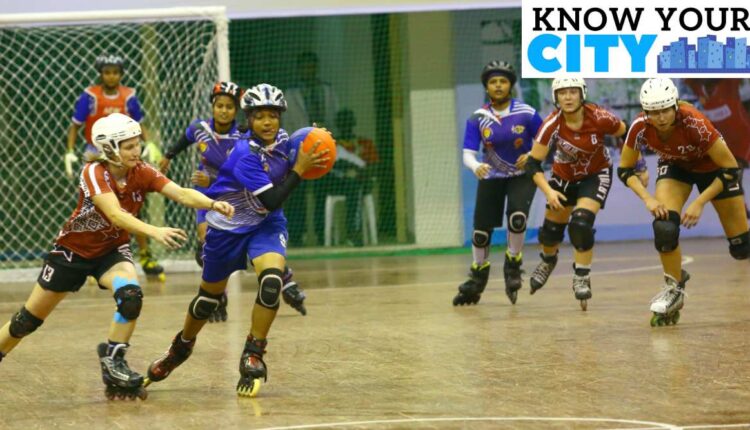 In April 2011, the Shree Shiv Chhatrapati Sports Complex saw an overwhelming number of people of all ages. It was a proud moment for 33-year-old Chetan Bhandwalkar to wear the Indian jersey at the opening ceremony of the first Rollball World Cup in an arena full of cheering spectators. “It is a moment of pride for an athlete to represent his country … I remember the day as if it were yesterday, there was a banner from a spectator that read ‘Cricket Bole to Tendulkar, Roll Ball Bole to Bhandwalkar ‘. Being compared to a legend was one of the most satisfying feelings I’ve ever had, ”he said.

Bhandwalkar, who is now the general secretary of the Roll Ball Federation of India (RBFI), said that not many can see a sport develop from its early stages and be a part of its development and future, but he got it all from Roll Ball .

The game is played between two teams on roller skates and is a unique mix of basketball, handball and throwing ball, the aim of which is to score the most goals in a set amount of time. Today the indigenous sport from Pune developed by Raju Dabhade is played in over 50 countries on five continents. However, it remains in the shadows when it comes to raising funds and getting the credit it deserves for the players.

How the ball got rolling

Dabhade, who is now General Secretary of the International Roll Ball Federation (IRBF), says: “Around 2001 I was a physical education teacher at the Bal Shikshan Mandir English Medium School, Kothrud. I routinely did evening roller skating lessons and during one such session a stray basketball from a nearby court interrupted our training. One of my students dribbled the ball for a while before handing it back. This little incident gave rise to the idea for the game. “

While he was putting in roller skates and a ball, the game still lacked structure and rules. Dabhade buried himself in the rule books of various sports, selected a few rules from basketball, handball and throwing ball and tried the fusion.

“Roller skating was a prerequisite for the sport and that’s why I first introduced the game to my students. We played the new game Roll Ball together. Besides having fun training, the exams helped me make the sport what it is today, ”added Dabhade.

The first Asian Championships were held in 2010 and the following year India held the first Rollball World Cup in Pune, in which 16 countries took part.

“Raju (Dabhade) Sir was my roller skating instructor and I was one of the first Roll Ball players. While the novelty of the sport intrigued many, he also faced concerns. Surprisingly, it was the Brotherhood themselves who believed that it wasn’t a serious sport and that it would not survive long. We didn’t let it get to us. As players in a completely new sport, we and our families had full confidence in Raju Sir and the game of Roll Ball, ”said Bhandwalkar.

The first national rollball team in 2011.

On February 2, 2003, Roll Ball performed its maiden game as a demonstration for the Indian Sports Authority and was recognized as an official sport. “Our next step was to take the sport outside of the city,” said Dabhade.

The new sport in the city

Roll Ball is played either on a hard surface or on ice and each team consists of 12 players – six on the field and six in reserve. Players are expected to dribble the ball repeatedly and the ball is held in one or both hands when passed to the other players. The game generally consists of two halves of 25 minutes each with a 10-minute break in between. Roll Ball is currently being played in the U-11, U-14, U-17 and senior categories for both men and women.

“We have held demo matches in roller-skating academies in various states as well as in our neighboring countries. We also held workshops for trainers to help them understand the nuances of the sport and build a stronger ecosystem for its development. Between 2003 and 2004 we also had friendly matches with Pakistan, Sri Lanka, Bangladesh, Nepal and Bhutan to introduce Roll Ball to their ice skating teams, ”remembers Dabhade.

The first Asian Championships were held in 2010 and the following year India held the first Rollball World Cup in Pune, in which 16 countries took part. Denmark emerged victorious while India took second place. “It was a milestone for roll ball as a sport, as it has not only developed into an international game, but has also grown exponentially within a few years. It showed how much potential Roll Ball has to become a household name in India, ”said Bhandwalkar.

Aditya Ganeshwade, the Indian rollball team’s captain since 2017, said the sport had changed after the first World Cup. “In a game against Belgium I was attacked from behind by a player. In any other sport like soccer or basketball, it’s easier to fend off an attack like this where a hand tries to take the ball out of your hand. In the case of roll ball, however, there is an increased likelihood that the player will lose his balance. It wasn’t a foul then, but it is today … The World Cup was the first real international competition with several teams participating, it helped us to identify problems and change the rules. The new rules have refined the game and kept the adrenaline rush and entertainment factor for the spectators in the stadium, ”said Ganeshwade.

The Roll Ball World Cup has been held every two years until 2019, with India being the current reigning champion for men, while Kenya takes the top spot for women. Among other things, a world record for the largest rollball lesson with 309 participants was awarded to the RBFI and IRBF on May 18, 2018 in Karnataka.

So that it goes on

At the age of only 27, Ganeshwade has been world champion in this sport for four years in a row with a total of 21 national and international medals. “I am maybe the only player who has done something like this. However, recognition for rollball players is very low. I’ve now been nominated five times for the prestigious Arjuna Award … you see, when players in a particular sport are recognized for their efforts at the game, more players are connected. It also helps with factors like sponsorship, recognition for the sport, etc., ”he said.

Bhandwalkar stated that while roll ball is a new indigenous sport, it has been nearly two decades since its inception and not much has been done to strengthen its infrastructure.

“From thousands of early players, we now have about 3.5 lakh players of all ages and genders playing the game in India. During the World Cup in Dhaka, in which 52 countries participated, we experienced a boom in this sport between 2008 and 15. While these facts illustrate Roll Ball’s success on a global scale, we are way behind in terms of resources, infrastructure and local engagement. It should be a matter of extreme pride that it is such a skilled and technical local sport, but which cannot survive without the necessary support from the state and the center, ”he said.

What does record inflation mean for the euro area?